In the wake of being criticized yet again over his inflated sense of self-importance,  host Adam Sessler revealed his true colors by going on an unhinged, multi-day tirade against the very audience he once sought to cultivate at G4.

The two-time former G4’s latest play at self-embarassment began on January 5th when, in response to Vice reporter Patrick Klepek’s outrage towards the MAGFest convention’s public mocking of Kotaku’s lack of journalistic integrity, he chose to weigh in on the situation with one of his typically demeaning and dismissive takes.

“I’ve never heard of Mogfest but these people come across like idiots who desperately want an invite to the party but haven’t figured out that you’re supposed to wear pants in public,” tweeted Sessler.

Given that MAGFest has been a cultural institution in the realm of video games ever since its inception in 2002,  Sessler’s turning up of his nose was soon met with criticism from fans, many of whom pointed out that unlike G4, the convention was still going.

However, rather than accepting any responsibility for disingenuously fanning the flames of outrage, Sessler instead turned his bile towards not just his critics, but video game players as a whole. 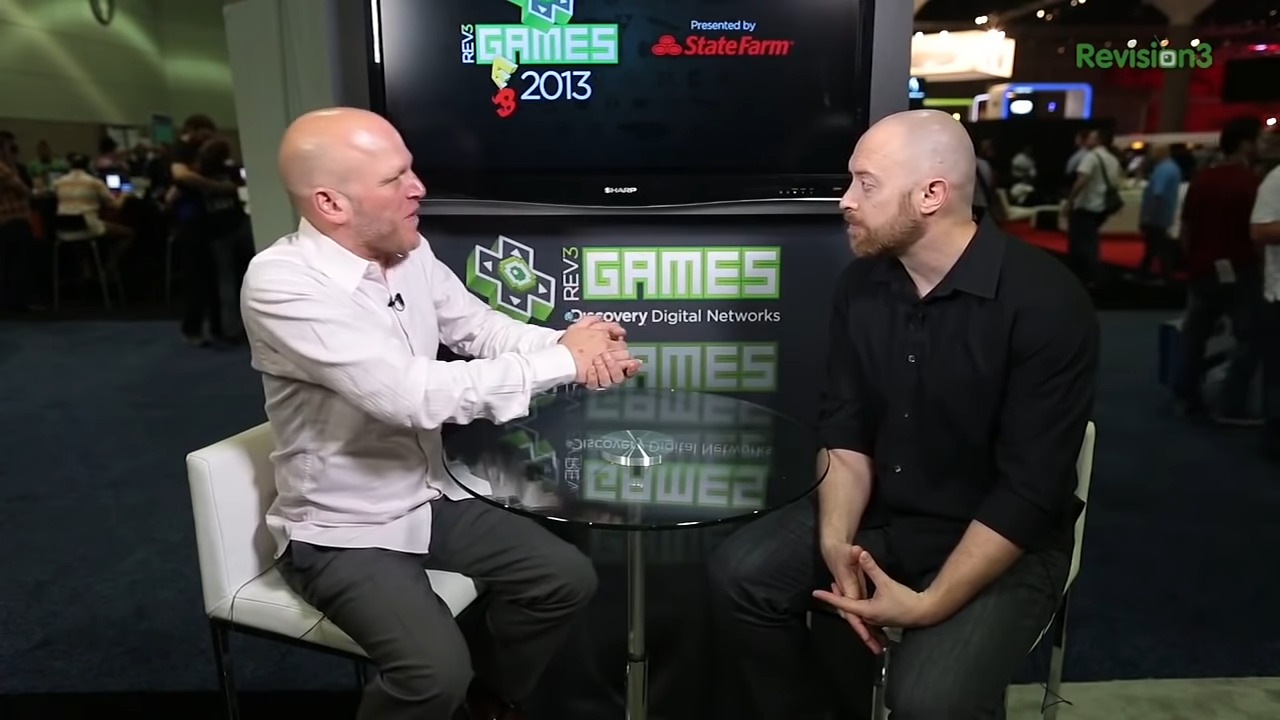 His tweet met with the reply of “since new g4 dropped harder than a sack of bricks you should stick to being the twitter lolcow, only thing you good at” by fellow Twitter user @roxxuku, Sessler shot back, “i don’t know if anyone else has noticed this in the past few days but gamers seem to be even less intelligible than normal this year.” 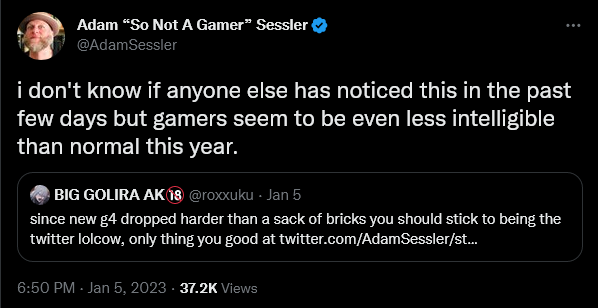 In response to this insult, @Jasonlo19809025 lamented, “And you wonder why G4 died because you constantly insult the fan,” only for Sessler to bark, “because all yall’s a bunch of f–king uneducated, socially deficient narcissists with no ambition. You’re forcing my hand, don’t you see?” 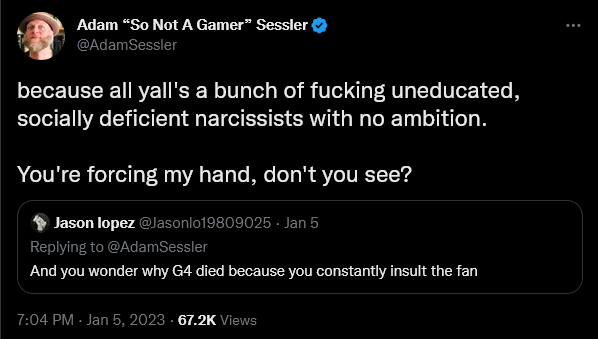 Taken aback by this assertion, @Stxte_Chumps summarized, “Apparently people who play video games are a bunch of f–king narcissists with no ambition,” before mocking Sessler as “a f–king tool.” 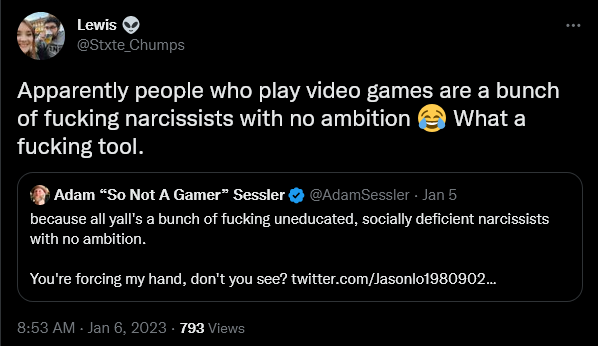 Disagreeing with Sessler’s desperately performative and uncharitable description of video game players, @TequilaMan89 argued, “Imagine if you insult film watchers or book readers by calling them “cynical jackasses who are a waste of life”. That’s what you’re doing rn and you should stop.”

“But…but they aren’t,” said Sessler of film and literature enthusiasts.

“And neither are gamers,” countered @TequiliaMan89, in turn drawing further childish insults from Sessler.

“Gamers aren’t cynical by any means,” said the failed television host. “They’re too f–king stupid and inexperienced to develop an ennui.”

Noting that his behavior was only vindicating the claim that he was a ‘f–king tool’, @Campbell__duo sarcastically asked of the G4 personality, “Proving the dude’s point, huh Adam?” 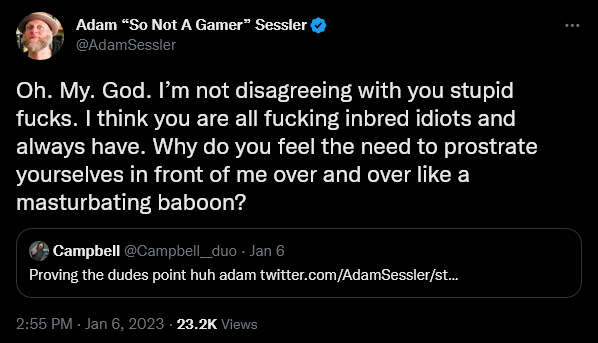 Later asked by @AmalThazad why exactly he was drawing so much fire from players across the ideological board, Sessler appraised, “I’m not sure either. I think the gamers accused me of being me -thinking gamers are useless corporate-bred hairs and cultural Neanderthals -and when I agreed they lost their s–t. Anyone else have a different take?” 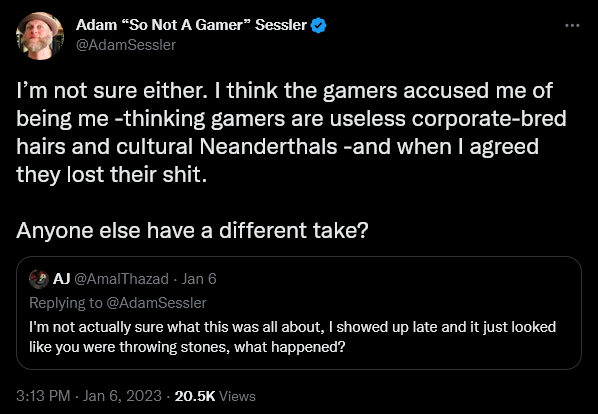 Hoping to have their personal opinions validated with an exemption from his deluge of immature name-calling, @BowsersBig inquired as to whether or not Sessler was “saying that ALL gamers are Neanderthals”, to which he admitted, “*deep breath* it’s all of you.”

“Please feel free to use the Gary Oldman Gif from Leon,” he added, referring to a scene from the Léon: The Professional wherein the actor orders the totality of his henchmen to hunt down the film’s titular protagonist. 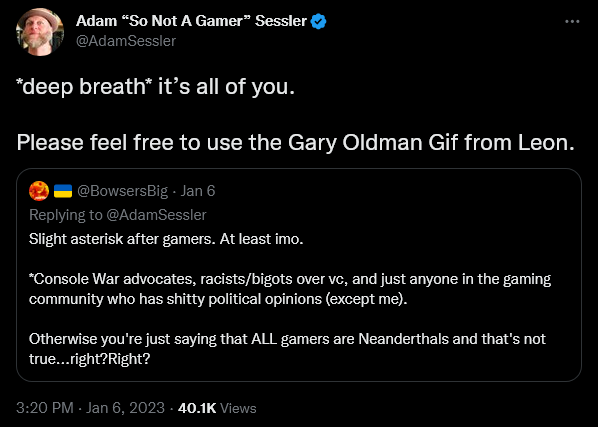 Offering yet another counter to Sessler’s viewpoint, @RedRocketLoans argued, “If gamers were such simpletons, it should be very easy to entertain them with your idiot box shows. Being such a failure at entertaining morons isn’t really the own you think it is.”

“Sir, you and your loping, spittle-drenching anal-retentive social-troglodyte Ilk are not simpletons,” the pompous personality retorted on January 7th. “You’re the cross society has to bear and feed with our tax dollars. We ‘own’ you only in that we have to wipe your ass for you.” 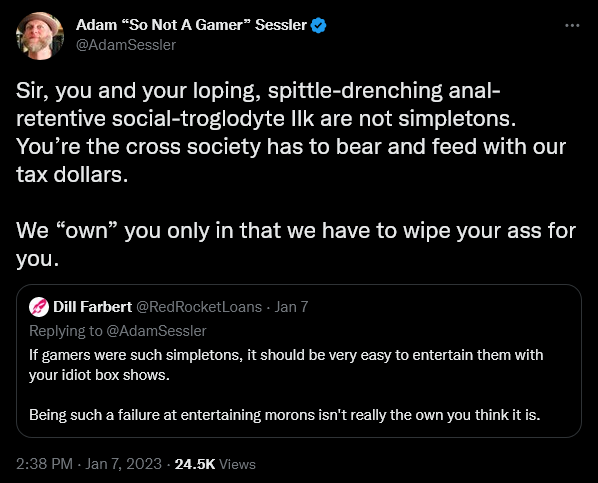 Unfazed, @RedRocketLoans laughed, “Lol, the misdirected classism from a an unemployed, washed up ‘entertainer’ at a burner account with 5 followers who’s simply calling out your own self owns is the most entertainment I’ve gotten from you in decades. Thank you.”

“that’s not misdirected, i truly think you and yours are beneath me in all respects,” declared Sessler in turn. “Happy to humor you. Let me know if you need me to step on your testicles in heels anytime soon.” 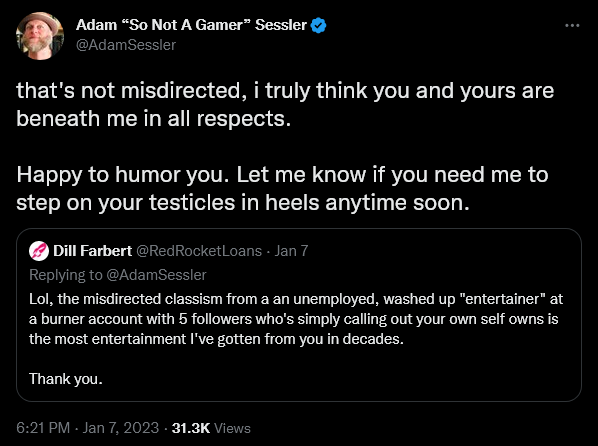 On January 8th, @MemesOfPacifism rolled their eyes, “This will surely bring the audience back, Adam,” drawing a response from Sessler of “One of the worst things you can do to society is teach a gamer to believe in themselves.”

“After the past few months what kind of simple-minded, sheltered dick-twiddle thinks I have any interest in them as an audience or any interest in games content anymore?” 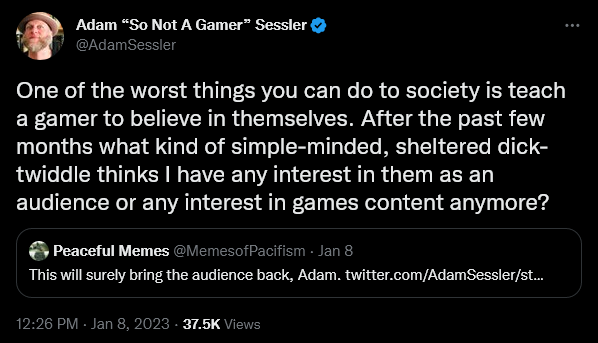 Hoping that his general respect of Sessler would allow his input to cut through the criticism, @PyrOMG raised the concern, “I know there are a fair amount of idiots who don’t show respect or deserve ‘the high road’ but this sounds like ‘f–k you, I have no need for you.’ to all your gaming fans.”

To this, he would affirm, “Looks like the train of thought is finally pulling into the station.” 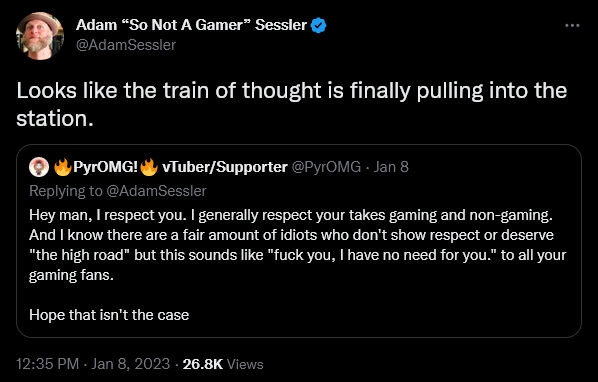 Later that same day, Sessler would respond to @Avarith_Grey’s claim that his departure from the industry was the result of G4’s failure, the former host bleated, “Okay. I’m gonna be a little more blunt than usual to clear things up for the gamers. I’m out of games/entertainment because I founded an AI company that was bought by Reddit.”

“I’m semi-retired by choice you juvenile f–k,” he snapped. “Now excuse me while I return to the adults.” 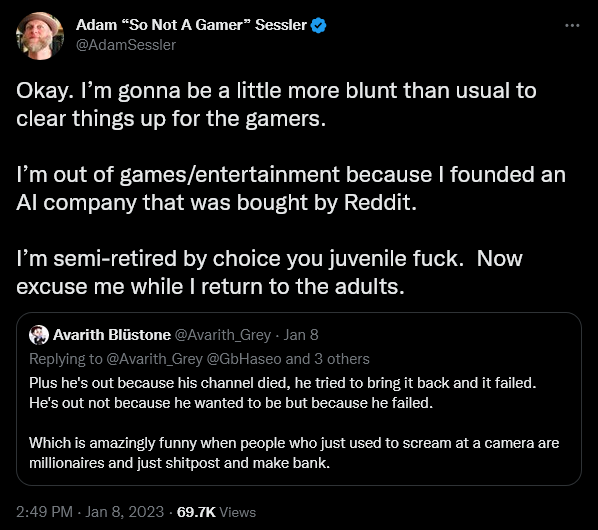 Asked by YouTuber @RGT_85 “So are you calling yourself a ‘micro dick pubic lice’ and are self projecting or are you not a gamer anymore?“, Sessler put the final bow on his tantrum by declaring, “Just you and yours. Never was a gamer myself. Don’t overthink this bucko.” 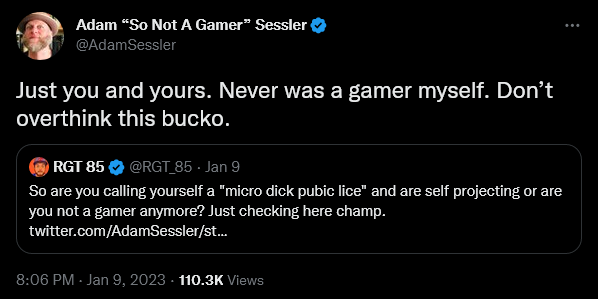 Notably, the above tweets represent only a small fraction of the posts made by Sessler during his meltdown.

As of writing, his full, unhinged rantings remain live on his Twitter feed. 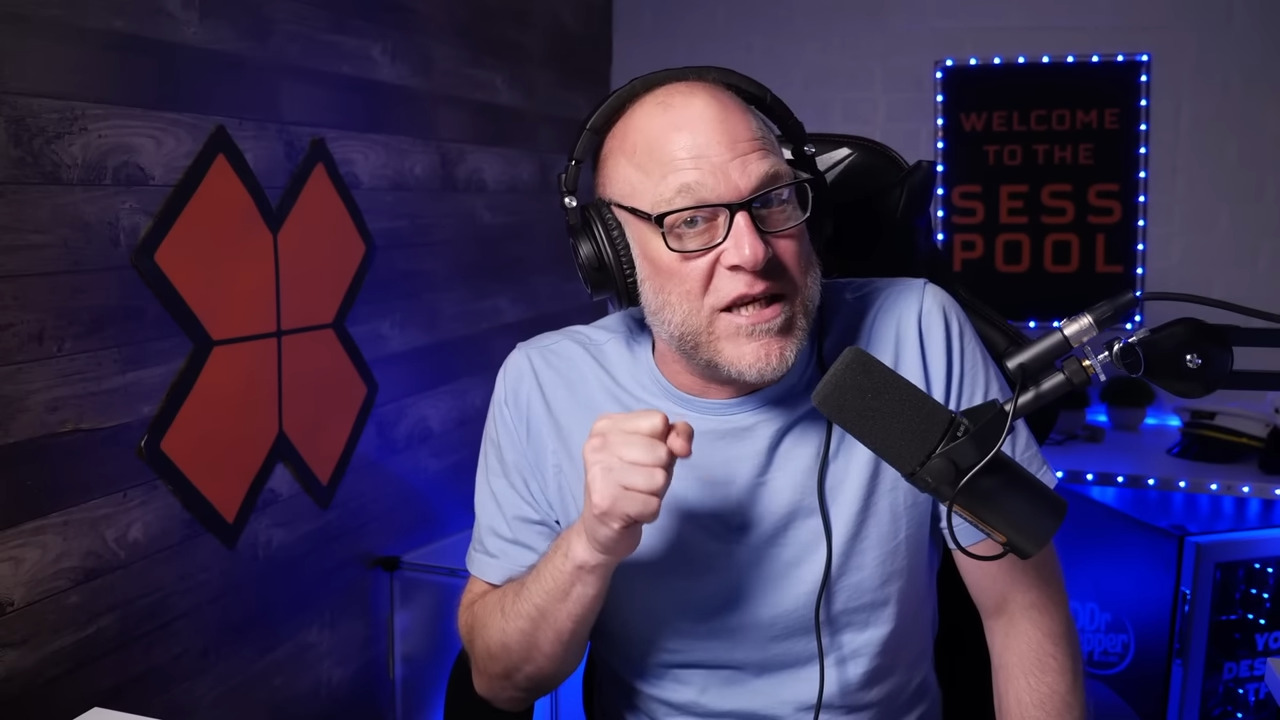