The Godzilla franchise has had a large following for quite some time, but the King of the Monsters himself has had more eyes on him than ever before thanks to the release Legendary’s 2014 Godzilla film, which sparked the ongoing MonsterVerse.

Throughout his long-running history, Godzilla has faced many foes, and with Godzilla vs. Kong debuting soon, what better time to take a look back and some of Godzilla’s triumphs and decide which moments stand out as, dare I say, his best?

Let’s dive into Godzilla’s ten greatest moments of all time! 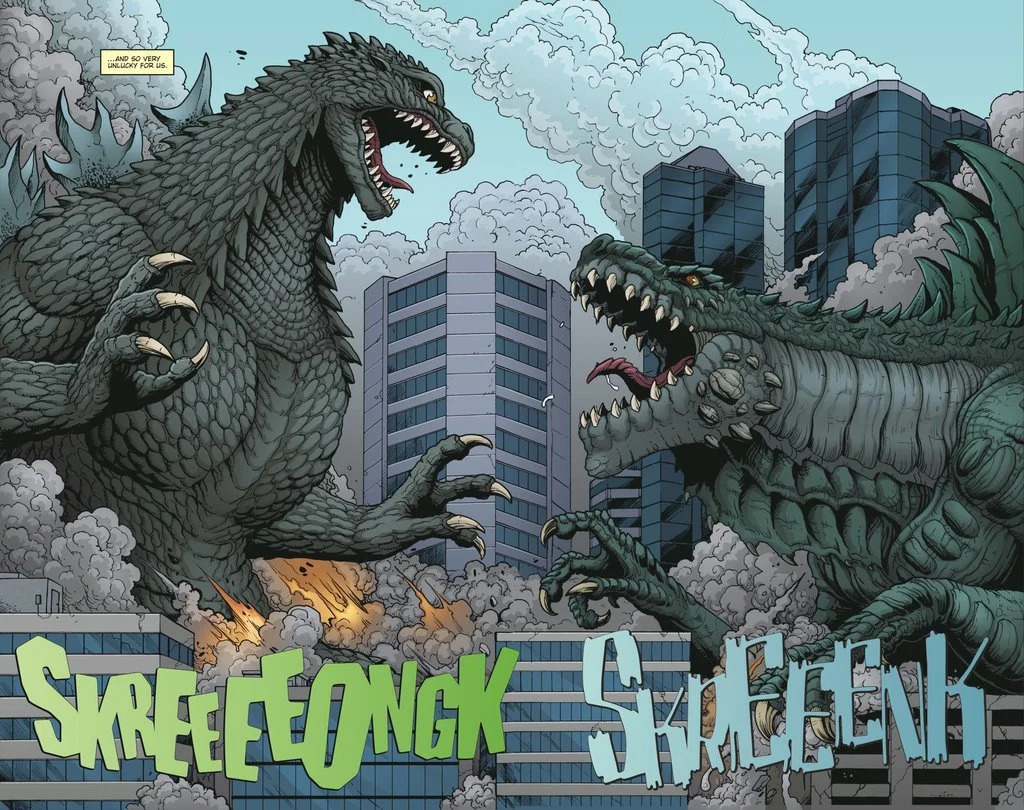 I think I can speak for many when I say this was a satisfying moment to fans when Godzilla obliterates the abomination dubbed as Zilla.

The way Godzilla effortlessly destroys Zilla within a few seconds is remarkable, giving him one good slap with his tail before destroying him with the use of his atomic breath.

Unable to even manage to get one hit in, the poor 1998 American version of Godzilla never stood a chance, to say the least, as the battle lasted a record-setting and whopping forty seconds total.

9. Showdown With A Robotic Copy – Godzilla vs Mechagodzilla (1974) 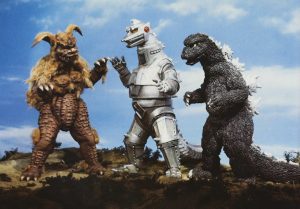 Mechagodzilla’s big reveal moment in the original film is one for the books. The movie begins with what we know to be Godzilla going on a rampage through Japan. Suddenly, the real Godzilla comes forth, seeking to brawl against this imposter Godzilla.

During the course of this spectacular and hair raising fight, pieces of flesh are ripped off of Godzilla’s opponent, revealing that the imposter is none other than a robotic version of Japan’s famous kaiju. Dubbed ‘Mechagodzilla,’ the cybernetic powerhouse boasts eye lasers, finger missiles, knee missiles, flight capabilities, and even a ray gun on his chest.

Despite this arsenal, Godzilla manages to go toe-to-toe with his doppelgänger, with both monsters eventually retreating after suffering massive wounds and damage.

In this film, Godzilla takes on the giant crab-like sea monster Ebirah. During their final fight, there is a rather humorous moment where, after the two opponents spend a lengthy amount of time batting a rock back and forth in an attempt to deal damage to their respective opponent, Godzilla delivers a devastating fatality to Ebirah, effortlessly ripping off his claws and forcing him to retreat back into the sea.

In the movie’s defense, it was released in 1966, so its special effects aren’t quite up to modern day par. Though the fight doesn’t last very long, as Ebirah obviously didn’t possess the strength needed to actually challenge Godzilla, the humorous moment will stick with you well past its conclusion. 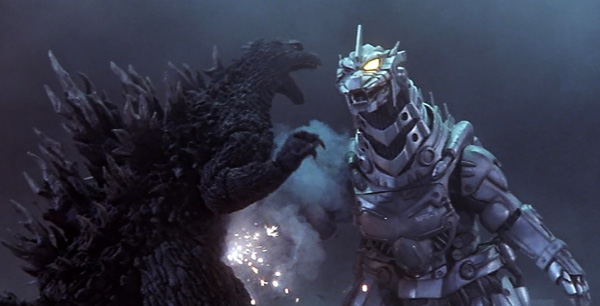 Upon hearing Godzilla’s roar, the memories within Mechagodzilla’s original Godzilla skeleton are triggered, reminding the metal monster of the death of the creature within himself and leading him to begin rampaging through the city. An unstoppable feat of engineering, Mechagodzilla then proceeds to destroy everything in his path, only ceasing his wanton destruction when he runs out of energy.

What makes this moment pretty neat is how Mechagozilla turns against his creators, the Japan Self-Defense Forces, for a brief period of time, rendering them powerless in the wake of his rampage. 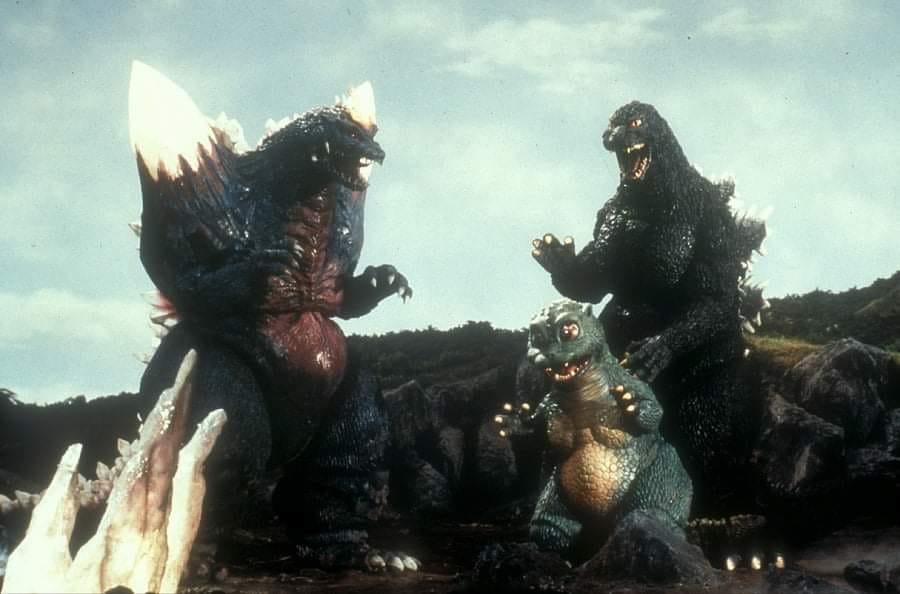 This movie is such an enjoyable one to view, as not only do we get to see SpaceGodzilla and Godzilla duke it out, but we’re also introduced to the precious baby Godzilla (who, if this movie came out in recent times, would very much give The Mandalorian’s ‘Baby Yoda’ a run for his money).

In the film, shortly before SpaceGodzilla comes crashing down to Earth from space, Mothra sends out small fairies known as Mothras to warn humanity of the impending threat. The Mothras inform the world that Godzilla must be protected, as if he is killed, SpaceGodzilla would easily conquer Earth and take over the planet for himself.

After SpaceGodzilla plummets onto Birth Island, along with an array of meteors bearing huge crystals that act as the space creature’s power source, the newly arrived threat encounters Baby Godzilla. His first contact with an Earth-based life form, SpaceGodzilla proceeds to agonizingly attack Baby Godzilla, prompting Godzilla to emerge and protect the child. However, Godzilla proceeds to be manhandled, being left immobilized whilst the infant Godzilla is trapped within SpaceGodzilla’s crystals as their enemy retreats.

Although this isn’t a moment where the actual Godzilla emerges triumphant, SpaceGodzilla’s savage assault is one of the character’s best moments and all-together amusing part of the film.

Shin Godzilla has hands down the most incredible atomic breath that I don’t think has been quite showcased like it was in this film.

I don’t think Godzilla’s signature atomic breath has ever been showcased quite like it has in Shin Godzilla, as the film presents what is hands down the most incredible depiction of the iconic attack.

As the people of Tokyo look on towards Godzilla’s newly evolved form, the kaiju begins to kneel down and charge himself up, before expanding his enormous mouth and blasting the city with his atomic breath. With energy shooting out of his dorsal fins, Godzilla rains damage, destruction, and death upon the inhabitants of Tokyo.

What makes this scene even more haunting is its operatic background score, which not only casts much more to emotion to the terror, but also brings a beauty to the scene that makes it an absolute masterpiece of a moment. Not only that, but the orange glow and massive size of Shin Godzilla makes this version a strong contender for the scariest version of the legendary kaiju we’ve ever encountered. 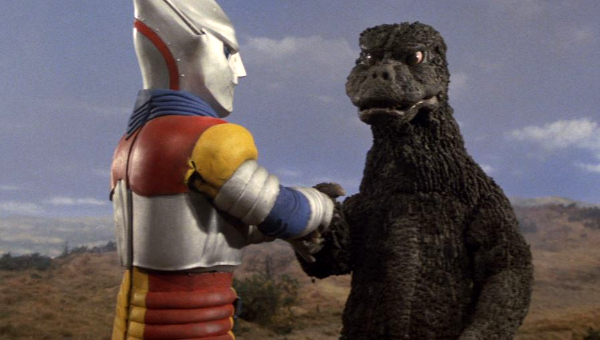 Godzilla vs Megalon captures to film one of the best team-ups of all time, wherein Godzilla joins forces with the friendly protector Jet Jaguar, a human-invented robot who can fly, communicate with monsters, and increase his size at will, to fight the combined threat of Megalon and Gigan.

During the final fight sequences, there is a moment where Jet Jaguar holds Megalon by his arms while Godzilla slides on his tail towards him, delivering the kick of all kicks and knocking the beetle-esque villain to the ground. Godzilla then proceeds to grabs Megalon by the tail, lift, him into the air, and repeatedly slam him into the ground.

The moment is made even more memorable thanks to the movie’s ending, where the two allies seal their friendship with the glorious and now-famous Jet Jaguar – Godzilla handshake. Personally, I hope to see this moment come to life again in the years to come. 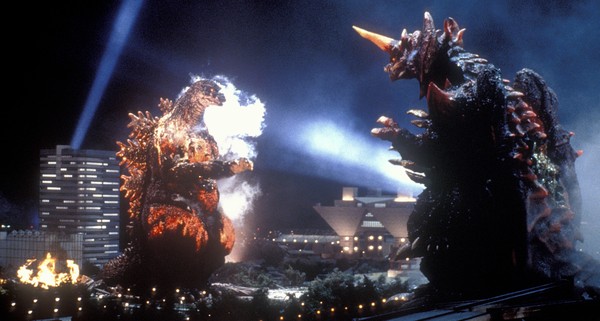 Featuring two Godzillas, Godzilla Junior and Godzilla Senior, Godzilla vs. Destoroyah sees Junior eventually come to blows with the film’s titular villain, before ultimately being destroyed (no pun intended) by Destoroyah. Upon the death of his child, Godzilla Senior cries out in mournful agony and attempts to revive Junior to no avail, a failure which lights a rage of revenge inside Godzilla.

However, after killing Destoroyah, Godzilla himself proceeds to suffer a nuclear meltdown due to the massive amounts of radiation he had been exposed to during the fight. Godzilla then literally melts into nonexistence, leveling Tokyo and leaving the city completely uninhabitable.

But as a side effect of Godzilla’s meltdown, the overwhelming levels of radiation now permeating through Tokyo provide enough energy to revive Junior, and from the ashes we see him emerge as the one and only Godzilla. 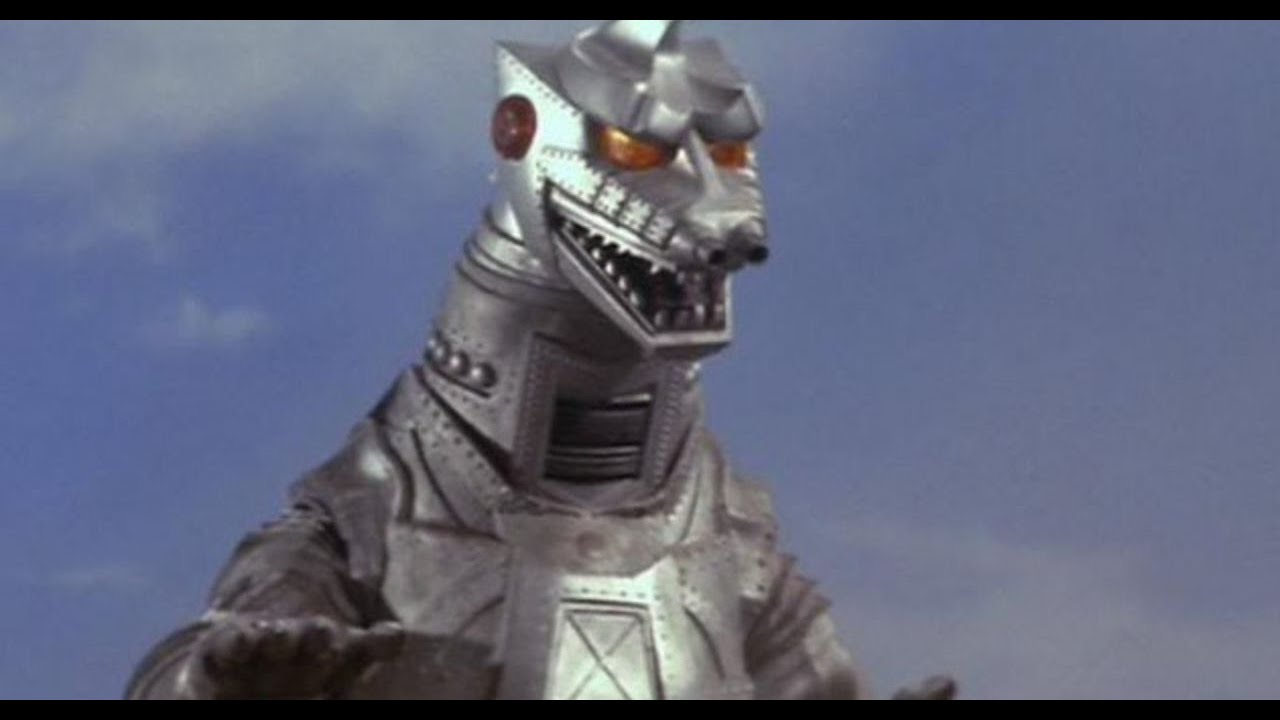 In the aptly named film’s final fight, Godzilla and Mechagodzilla clash for several minutes, exchanging blow after deadly blow. But of course, only one can surface victorious, and as the battle nears its end, a pummeling by Mechagodzilla leaves Godzilla covered in blood. However, as Mechagodzilla attempts to escape, his path is blocked by King Caesar and Godzilla, who join forces in one last effort to take down their mechanical foe.

The final blow that Godzilla delivers is absolutely astonishing. Godzilla grabs Mechagodzilla’s head and turns his head to make a full 360, before delivering the final fatality by ripping Mechagodzilla’s head right off. Though brief, this moment makes the list for the fact that it reinforces how Godzilla most definitely doesn’t hold back in a fight. 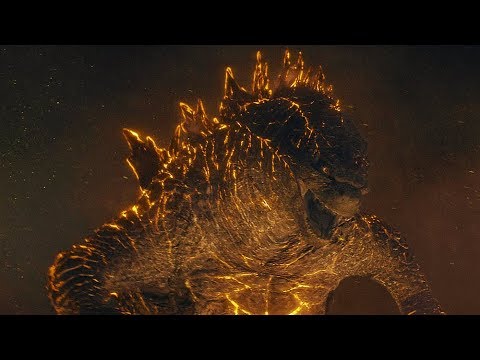 This Godzilla moment is very fitting at the number one spot, as it doesn’t get any better than this.

In 2019’s Godzilla: King Of The Monsters, following a battle against King Ghidorah, Godzilla finds himself on the brink of death. Sacrificing himself for the greater good, Dr. Serizawa personally detonates a nuclear bomb in order to juice up the kaiju and bring him back to life, as Godzilla was the only chance humanity had to survive against the invasion of King Ghidorah.

Following a long battle against King Ghidorah and Mothra’s sacrifice for his survival, Godzilla emerges from the blast boasting critical levels of radiation, melting anything within his immediate vicinity and radiating a vibrant red. As everything around him begins to to melt away, we hear Godzilla charge himself up before absolutely obliterating Monster Zero with a series of devastating nuclear blows.

This was a moment that went beyond many fans’ wildest dreams. Chilling, enticing, and yet even a little adrenaline pumping, this spectacular scene belongs in the number one spot.

What do you make of our top ten Godzilla moments? Are there any that we missed? Let us know your thoughts on social media or in the comments down below!