Actor Ingo Rademacher, known for his role as Jasper Jacks in Disney/ABC’s long-running soap opera General Hospital, has been targeted by the cancel culture mob after sharing a tweet that used the word “dude” to refer to transgender Biden Administration official Rachel Levine. 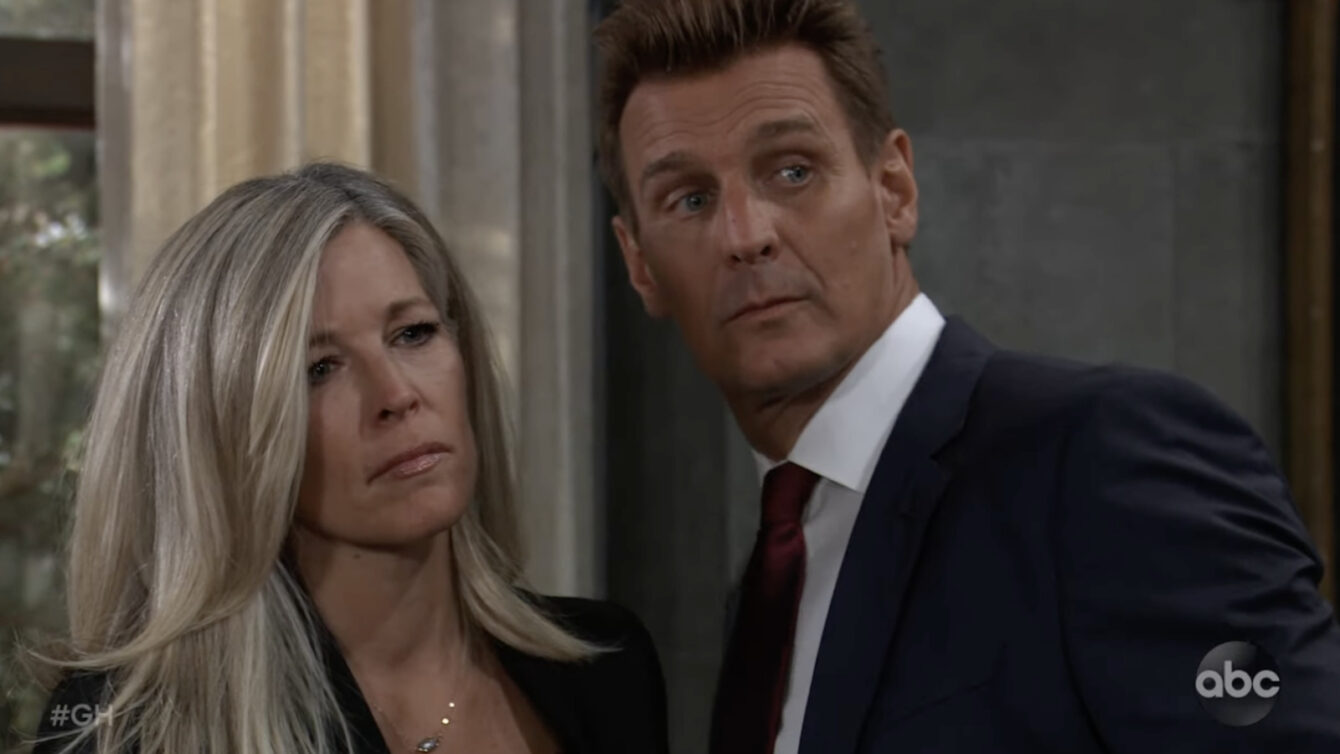 Last month, U.S. Assistant Secretary for Health Rachel Levine was sworn in as Admiral of the U.S. Public Health Service Commissioned Corps, in the process becoming the highest-ranking openly transgender official as well as the first openly transgender four-star admiral in the U.S. Government.

In response to Levine’s appointment, conservative commentator Allie Beth Stuckey wrote on Twitter, “Hello, and welcome to ClownTown, where the dude on the left is an empowering woman, and the woman on the right is a white supremacist.” 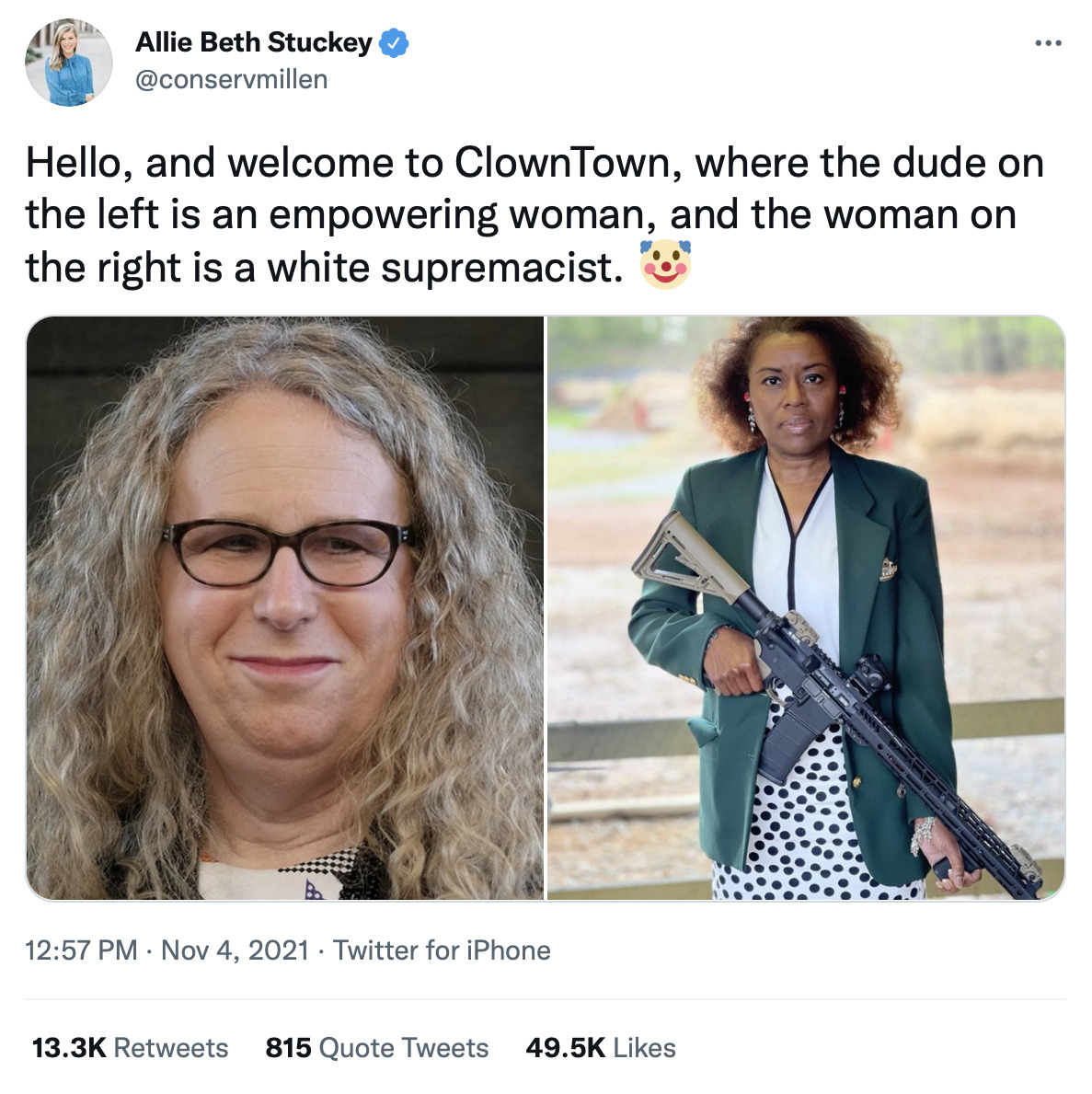 “The woman on the right” referred to by Stuckey is Republican Winsome Sears, who also recently made history as the first female veteran and legal immigrant elected to the position of Lieutenant Governor of Virginia.

However, because she also happens to be a Republican, the ‘tolerant’ left has already labeled Sears as a white supremacist. Such is the case of liberal commentator Michael Eric Dyson, who in a recent interview with MSNBC referred to Sears as a “black mouth” for “white supremacist practices.”

“There is a black mouth moving but a white idea running on the runway of the tongue of a figure who justifies and legitimates the white supremacist practices,” said Dyson.

This is one of the most repugnant and racist segments broadcast by a TV network this this year. The message could not be clearer:

People of color are duty-bound to recite liberal orthodoxy and pledge loyalty to the DNC, and those who don't are brainless puppets being used: https://t.co/RKsVoVlktx

Rademacher, who has been part of the General Hospital cast since 1996, found himself in agreement with Stuckey’s tweet and decided to repost it to his personal Instagram account.

Unsurprisingly, this managed to trigger social justice warriors, as well as some of his co-stars.

James contonued, “I feel deeply disappointed that such a public display of ignorance could come from our GH family.” 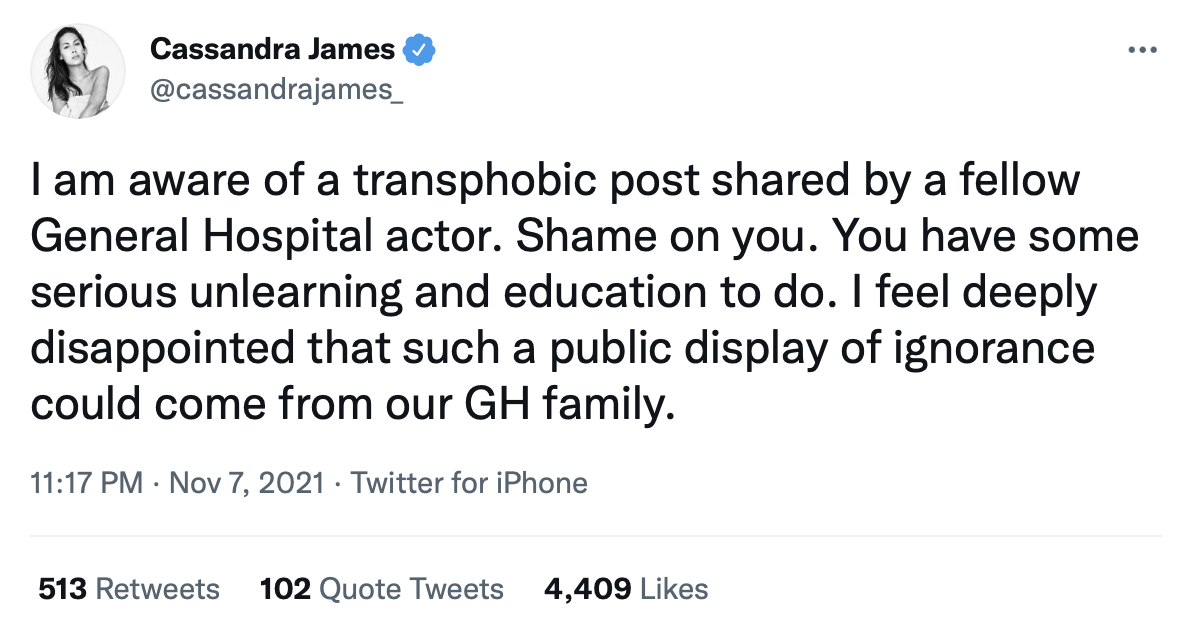 In a follow-up tweet, James asserted, “Misgendering trans folks is violence and if you come for one of us, you come for all of us. The cis world doesn’t get to decide which of us is valuable. I am so proud of the fans for always holding us to a high standard, for calling out transphobia and violence.” 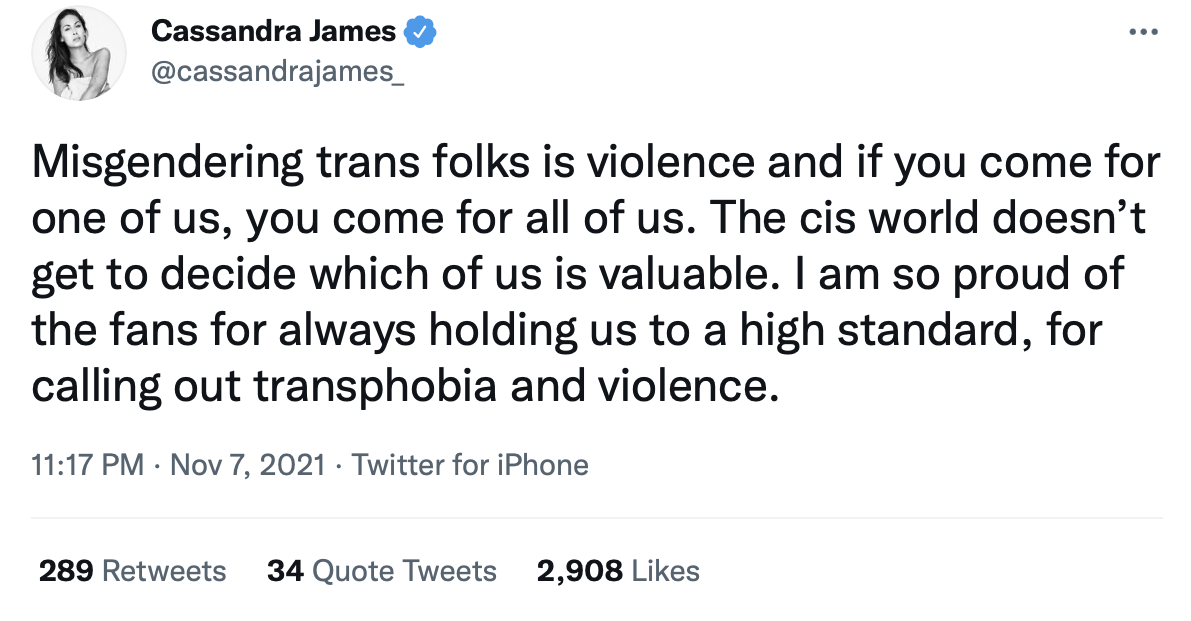 General Hospital actress Nancy Lee Graham chimed in writing, “The fellow actor, #IngoRademacher, is mercifully no longer a part of the #gh cast. Transphobia & misgendering are disgusting & should be unacceptable in any industry, including soaps/acting. I stand with my costar, @cassandrajames_, & the trans community.” 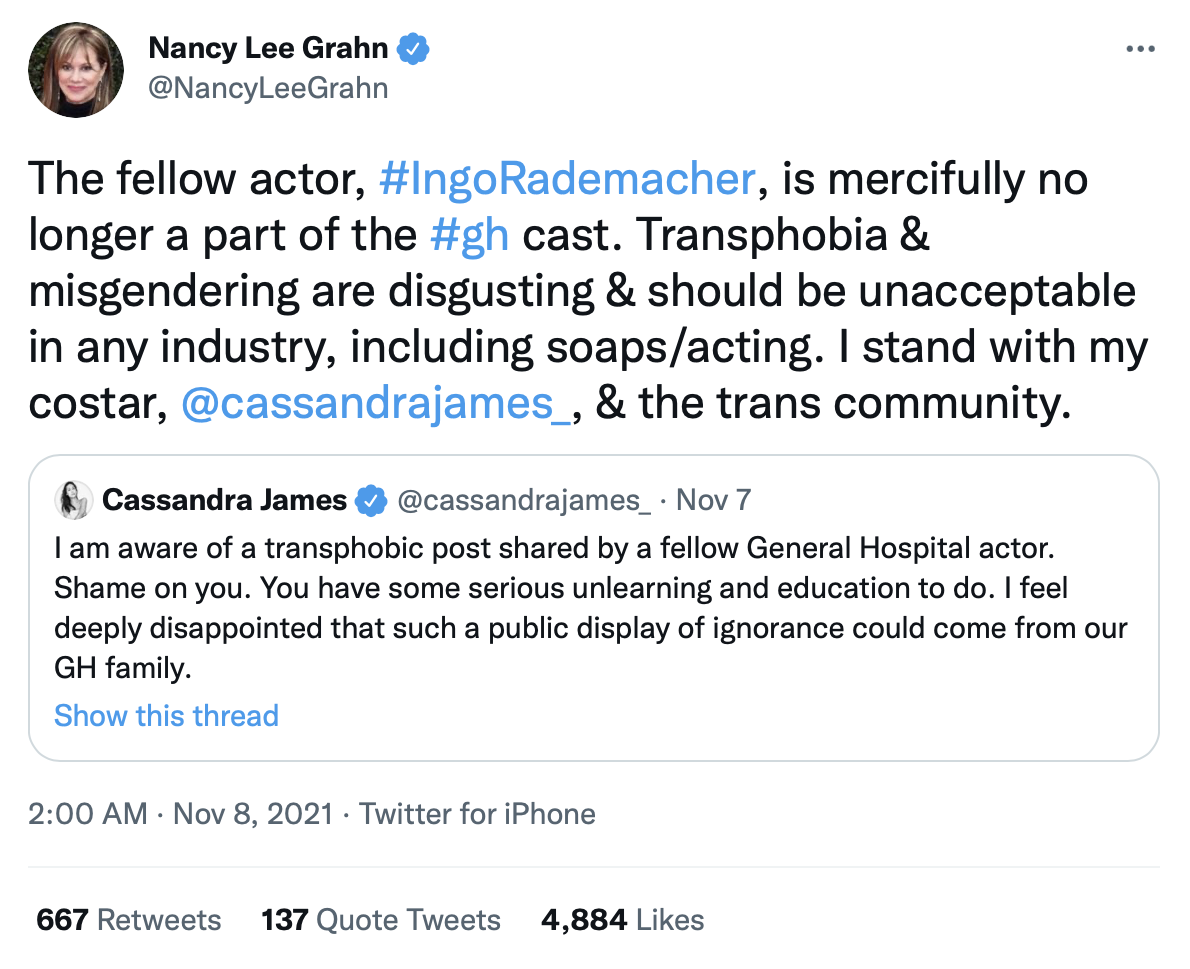 Meanwhile, social justice activists took their frustrations to Twitter, accusing Rademacher of transphobia and calling for his firing from General Hospital.

“Any actor that speaks vile words against another human should not be employed anywhere in the acting community,” read a tweet from @Walks_LikeRain. “#IngoRademacher is a has been attention seeking loud mouth, sexist, racist, transphobic, bigot. And any company especially Disney need to shout how wrong his words are.” 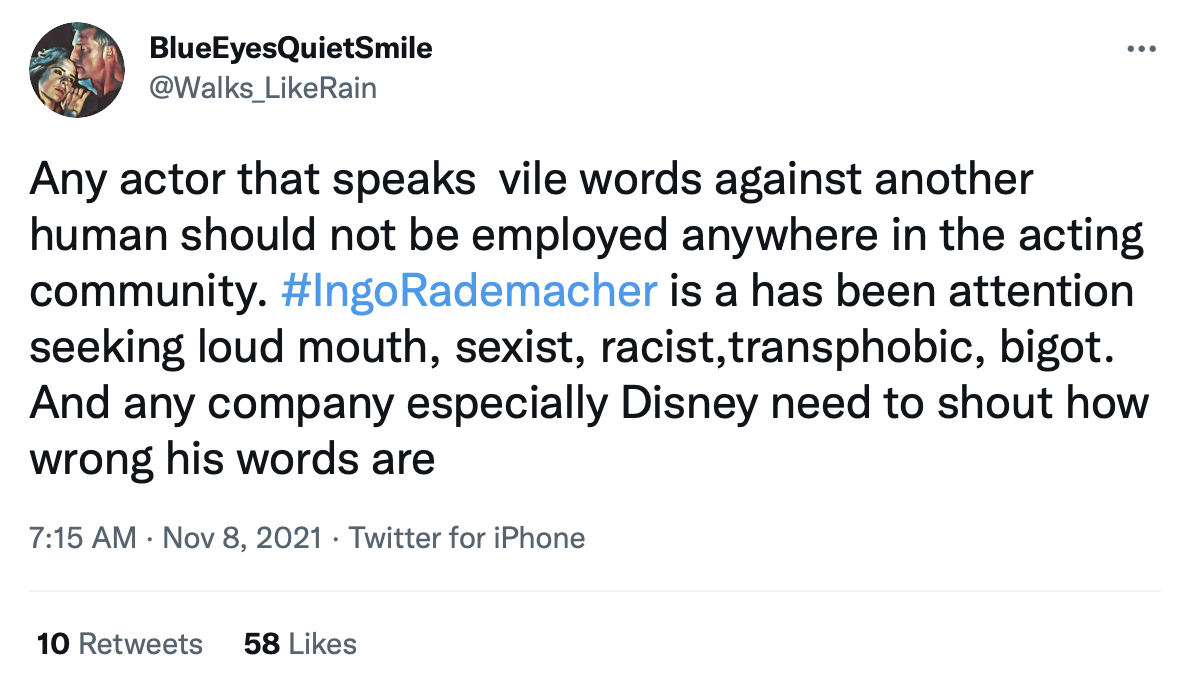 “God, Ingo Rademacher is such a vile piece of s—t. What a way to end your career #GH” read a separate tweet from @TheBinMasterPt2.

@CheyanneBabeey asserted, “[General Hospital] should have fired Ingo Rademacher a long time ago. But they let him spew his hate and ignored it. His character is not valuable to the show. Never has been. And if he were to leave today, not a single storyline would be affected. Not one. ” 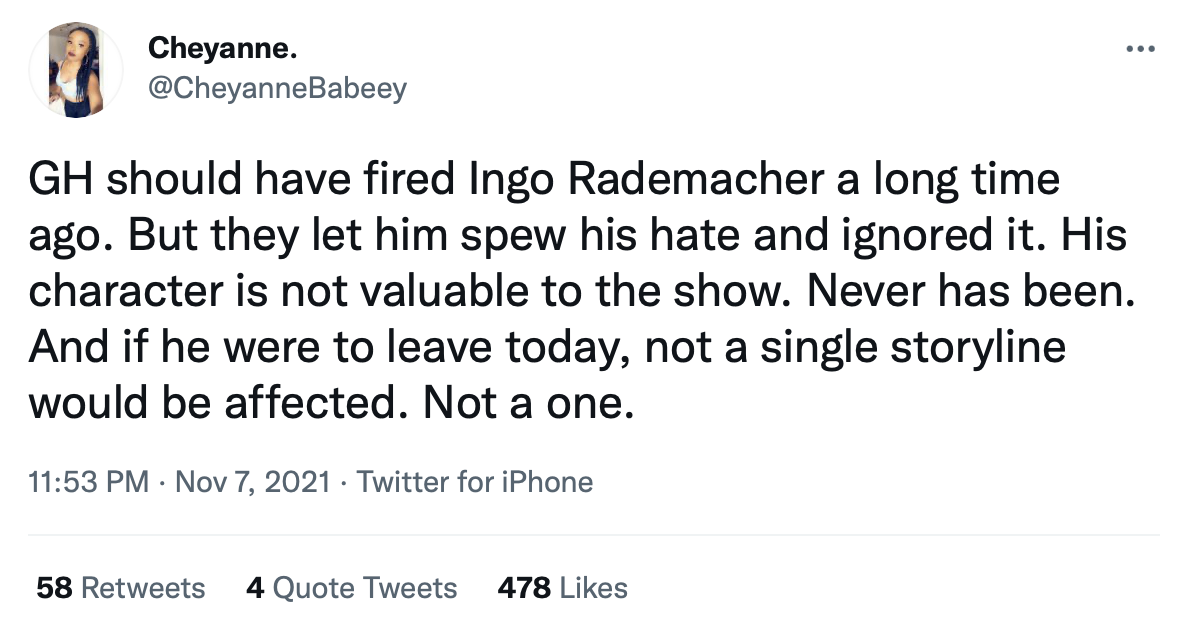 Judging who Rademacher follows on Instagram, Twitter user @_FallingGrace pointed out, “Look at the people Ingo Rademacher tagged in his photo like ANYONE and I mean ANYONE is sitting there going ‘gee, I wonder what Australian born actor who played Jax on General Hospital thinks of today’s mandates.'”

“Never seen someone so desperate for bad press,” the disgruntled user added, sharing an image lifted from Rademacher’s Instagram. 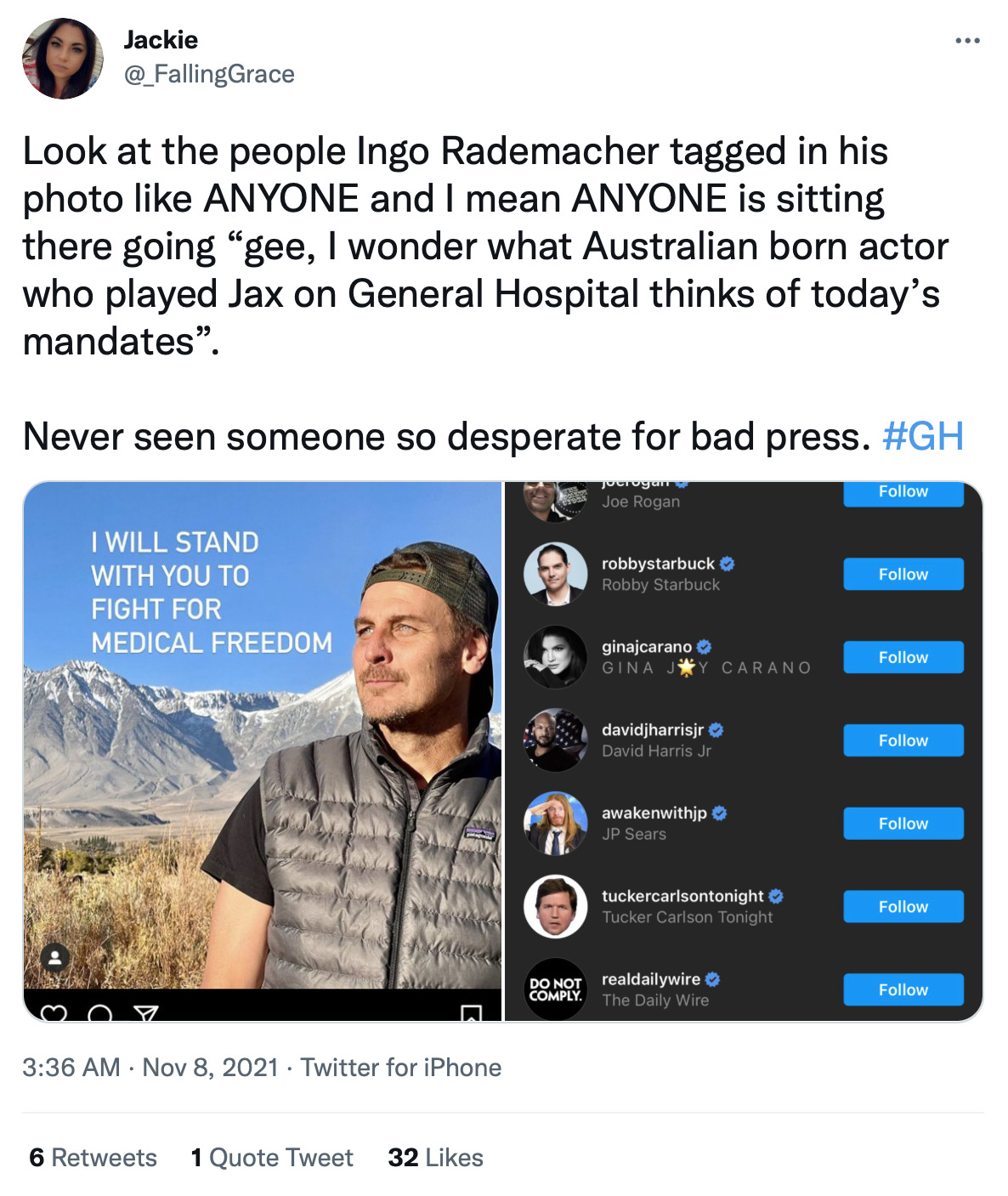 Interestingly, Rademacher shared that particular picture, captioned with the words “I will stand with you to fight for medical freedom. #medicalfreedom, #nomandates #woke #awakening #coersionisnotconsent “, as a form of protest against The Walt Disney Company’s new vaccine mandates.

It is worth noting that Rademacher is no longer part of the General Hospital cast, as Variety reports that the actor is “out at the long-running ABC soap opera because he declined to comply with the production’s vaccine mandate.”

Following the backlash he received from social justice activists, Rademacher took to Instagram to clarify the situation regarding his reposting of Stuckey’s tweet.

“Alright, guys, I want to address this real quick before this gets completely out of control. Of course, it already has,” the actor stated in a video shared on Monday. “The left always likes to run with, ‘Ingo Rademacher is transphobic’ instead of pointing out the fact that I was comparing that, while it’s not okay to call a black woman a white supremacist, I don’t think either that it’s okay to call a transgender an empowered woman because, where does that leave women?”

“Think about that for a second. Where does that leave women? Women have fought so hard to get on a level playing field with men. They weren’t allowed to do anything back in the day. They were nothing, so I don’t agree with that,” Rademacher explained.

He then clarified, “But I do apologise for not crossing out ‘dude’ and putting ‘transgender,’ so I apologise for that. Because me personally, I wouldn’t have written it that way, that was somebody else’s post.”

“Again, that’s not an excuse,” he added. “I should’ve just crossed it out, but the comparison there is just pointing out the hypocrisy of the left-wing media.”

Addressing co-star James specifically, Rademacher said, “I apologise to you as well, sincerely. I think you’re an absolute talent, and you’re very beautiful as well. I don’t think a transphobic man would say that. I think you’re absolutely gorgeous, I really do.” 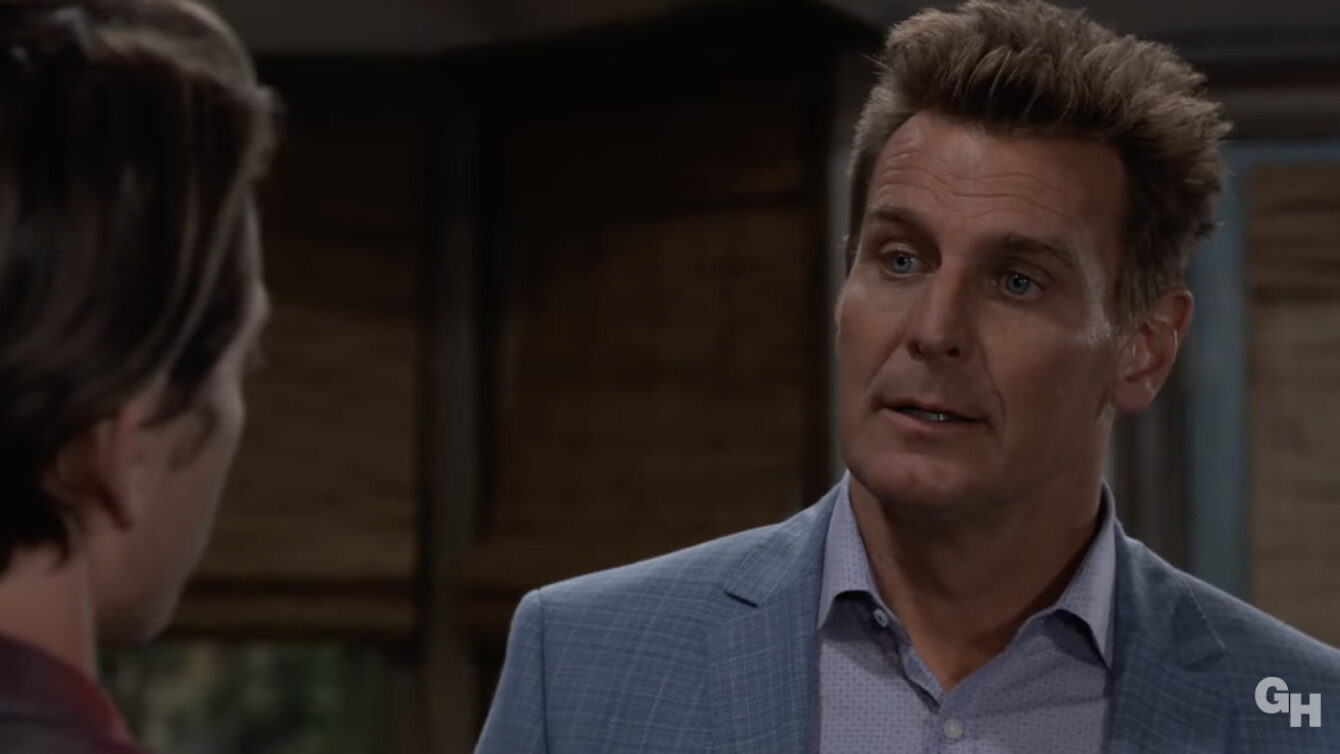 What do you make of Rademacher reposting a tweet deemed transphobic by social justice activists? Let us know your thoughts in the comments section down below or on social media.