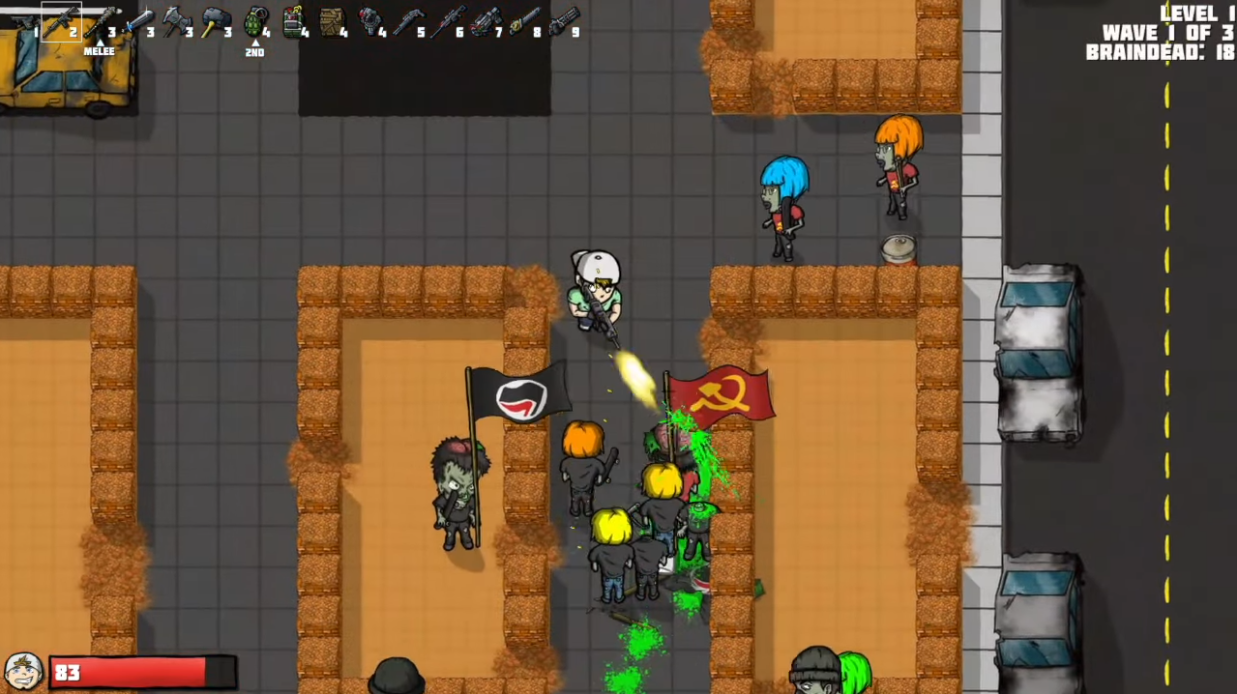 Launched earlier this month, the twin-stick shooter arcade style game describes itself as “a highly satirical fast-paced zombie shooter PC game,” where players “defend yourself from hundreds of braindead attacking you in order to live another day!”

The trailer makes it apparent it is satirizing Kyle Rittenhouse’s defense of his person during the Black Lives Matter riots that engulfed Kenosha, Wisconsin in August 2020.

The trailer continues, “An innocent young man is returning home a hero… But evil never sleeps…And the nightmare repeats once more against the mobs of the BRAINDEAD!”

Along with the description, the player character is designed similar to Rittenhouse’s outfit from August 2020 and also shows the character being attacked by zombies carrying the flags of the Soviet Union and Antifa. The zombies also wear Soviet and Antifa insignia. 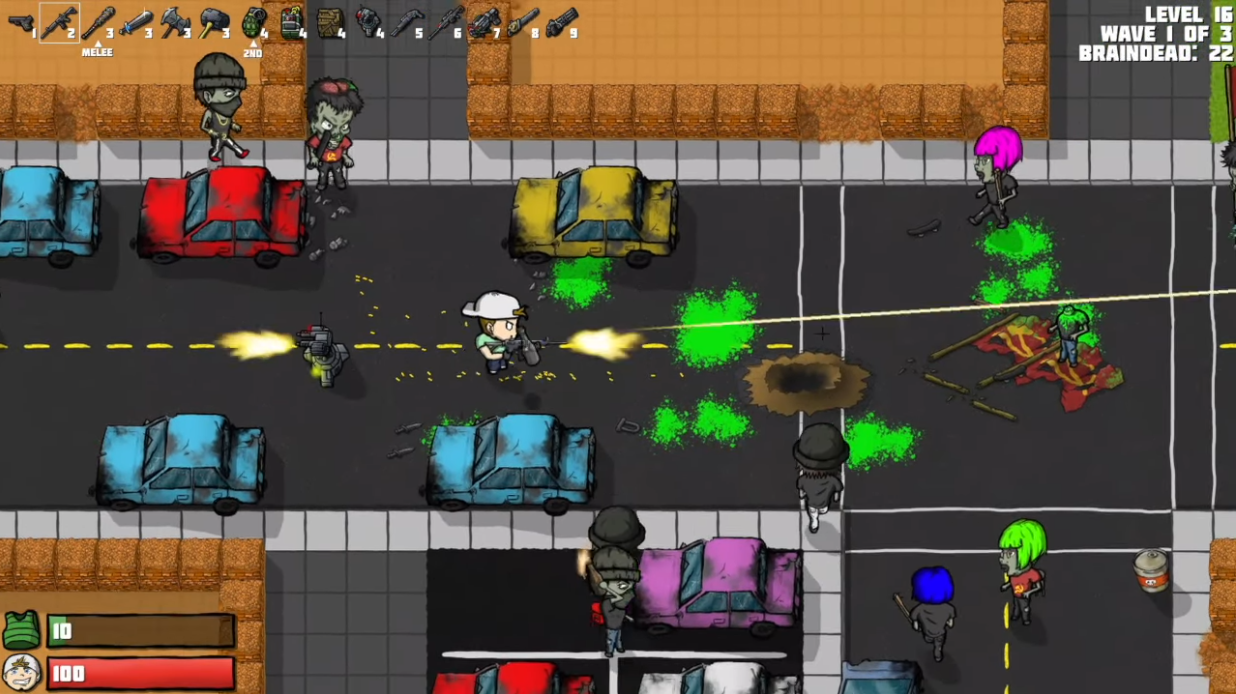 Along with these flags and insignias, their character designs are all stereotypes of Antifa rioters. This includes zombies with neon-dyed hair, morbidly obese zombies, and transgender or crossdressing zombies. They also use improvised weapons and firearms.

As players “Fight for your life against decades of bad parenting & education that has physically manifested into a skateboard-swinging, feces-flinging horde of undead rage!”, they enter randomly generated and fully destructible maps. Players must place their own barricades and gun turrets to help stem the horde, and fend them off using 18 different weapons.

Currently available for $7.95, the game is rated 98% positive across 619 reviews on Steam. 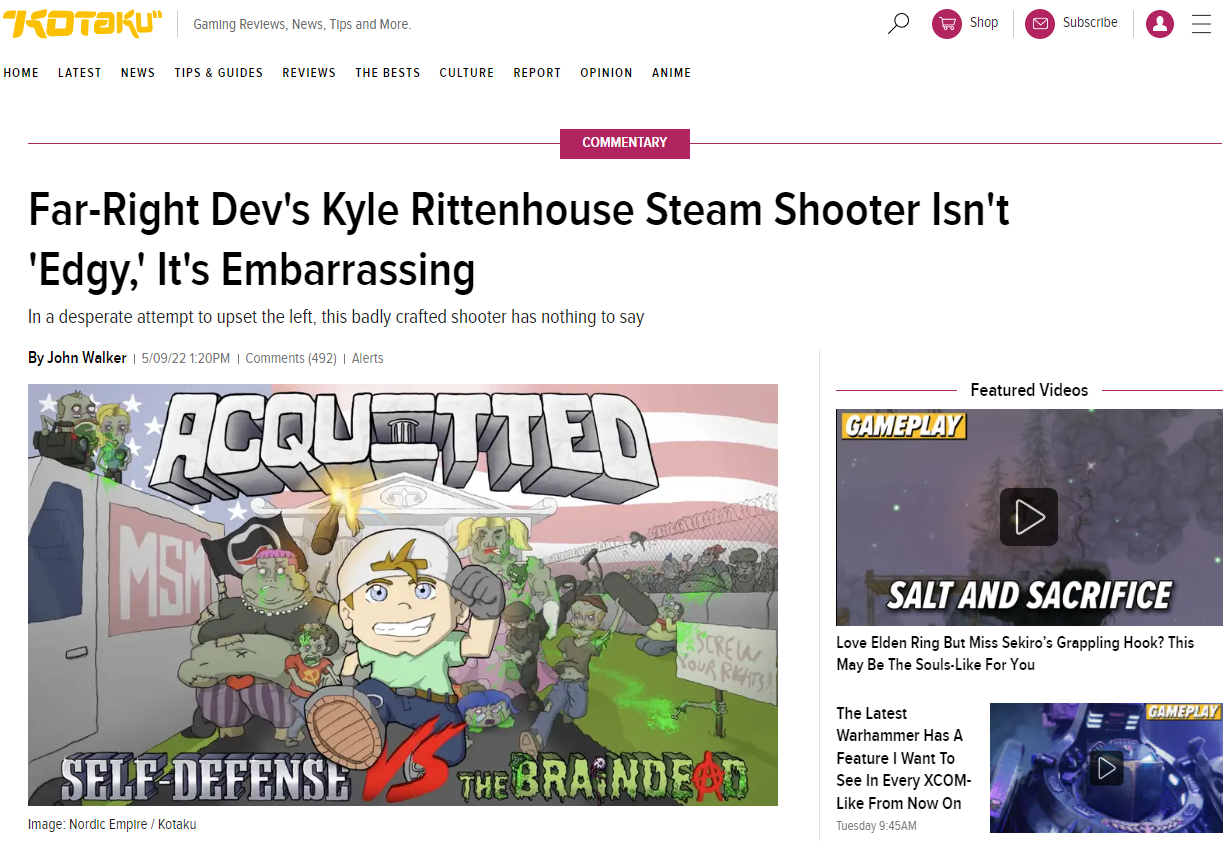 Not everyone is happy with the game however. Kotaku writer John Walker criticized it in his editorial, “Why can’t far-right provocateurs just be good at anything?,” saying Acquitted was “a very poorly made zombie shooter, without even a glimmer of the courage of its convictions.”

While Walker defiantly believes Rittenhouse “got away with killing people,” his criticisms include the game being repetitive, set in the same location, and features simplistic gameplay. Even using zombies wasn’t good enough in Walker’s mind, noting the developer had “no external pressure to censor its own game. It just chickened out.” 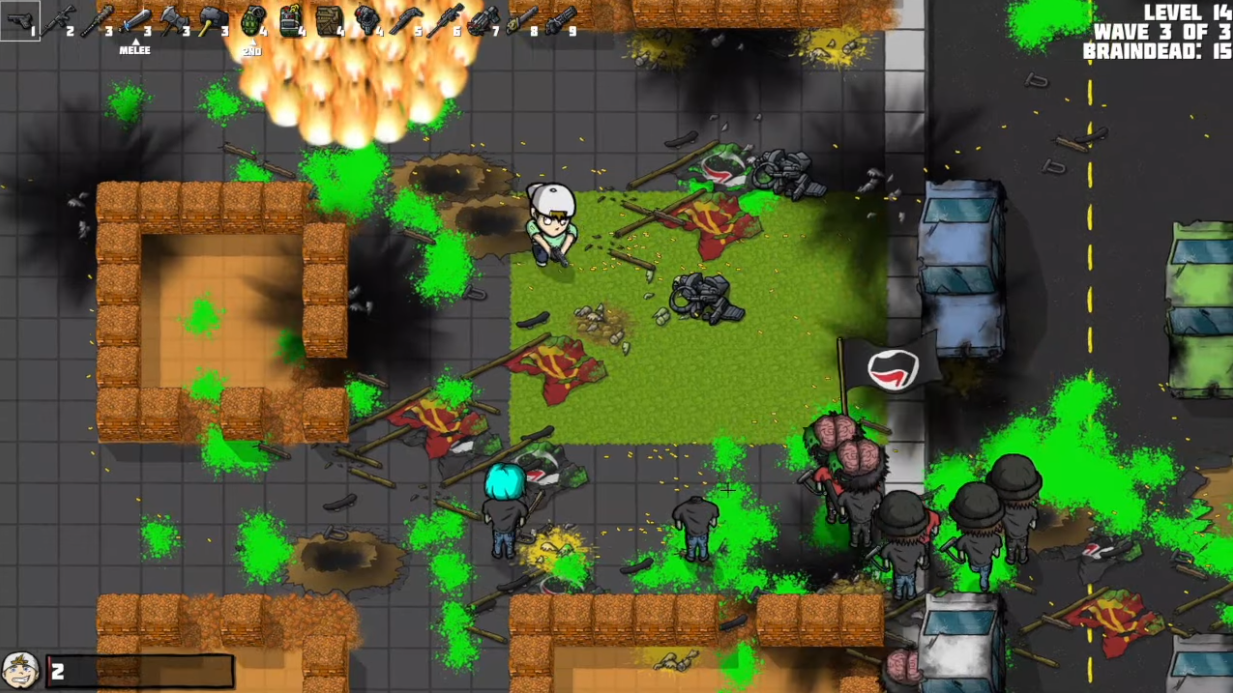 After extensively detailing one of the developer’s involvement in Swedish politics, William Hahne, former press secretary for the Swedish Democrats’ youth league and the founder of Alternative For Sweden, Walker condemns him as “too big of a yellow-bellied coward to make a game that actually says anything.”

“Rittenhouse shooting zombies? What even is that? Even if you’re generous enough to extend the branch that calling ‘woke’ people zombies is some sort of all-time burn, it still makes no coherent sense,” writes Walker.

He also alleges the game fails to “defend Rittenhouse’s actions, let alone portray a coherent argument for self-defense,” nor support the developers’ goal of avoiding “the narratives that are repeatedly forced into modern entertainment [that are] more often than not run contrary to healthy living and many of the foundational values of Western Civilization.” 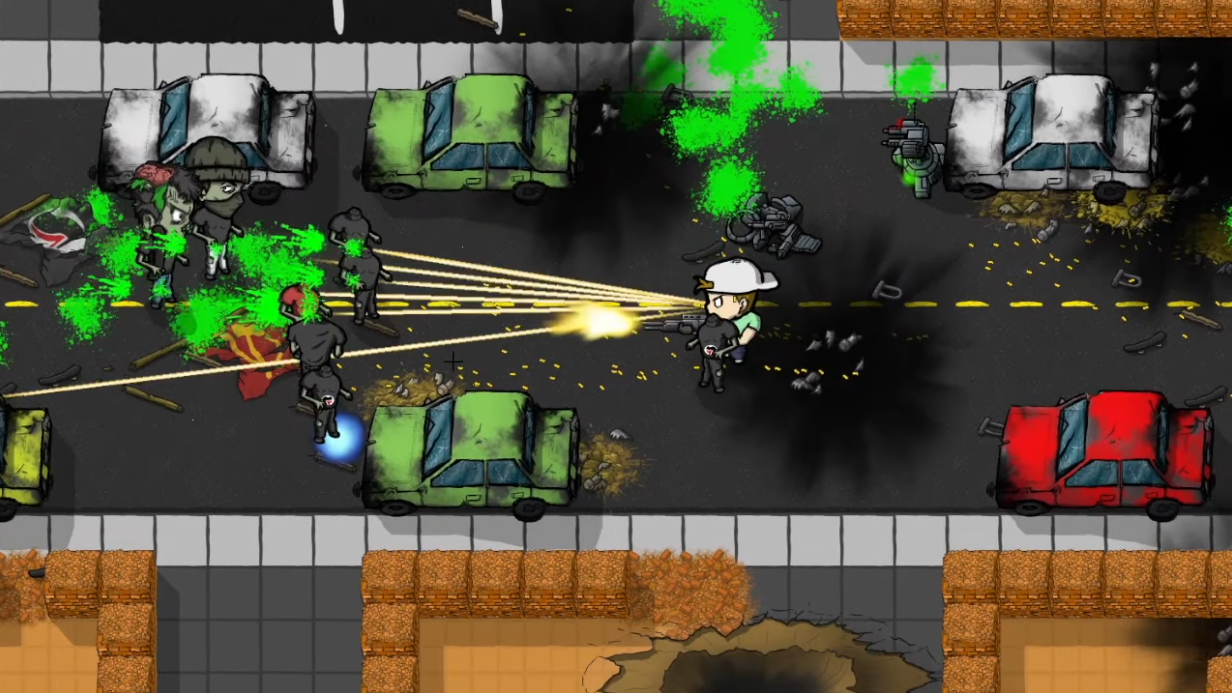 However, Walker did not call for Acquitted to be banned. “It should be left on Steam for all time, so no matter how long they live, this pitiful rubbish will always be attributable to them. They’ll always be the laughing stocks who thought this crap would achieve anything.”

“Don’t give them money, for heaven’s sake. Not even if you’re desperately curious. Believe me when I say it’s worse than most of the incessant waterfall of s–te that pours onto Steam every day. But don’t call for it to be banned, either. They haven’t begun to earn such efforts.” 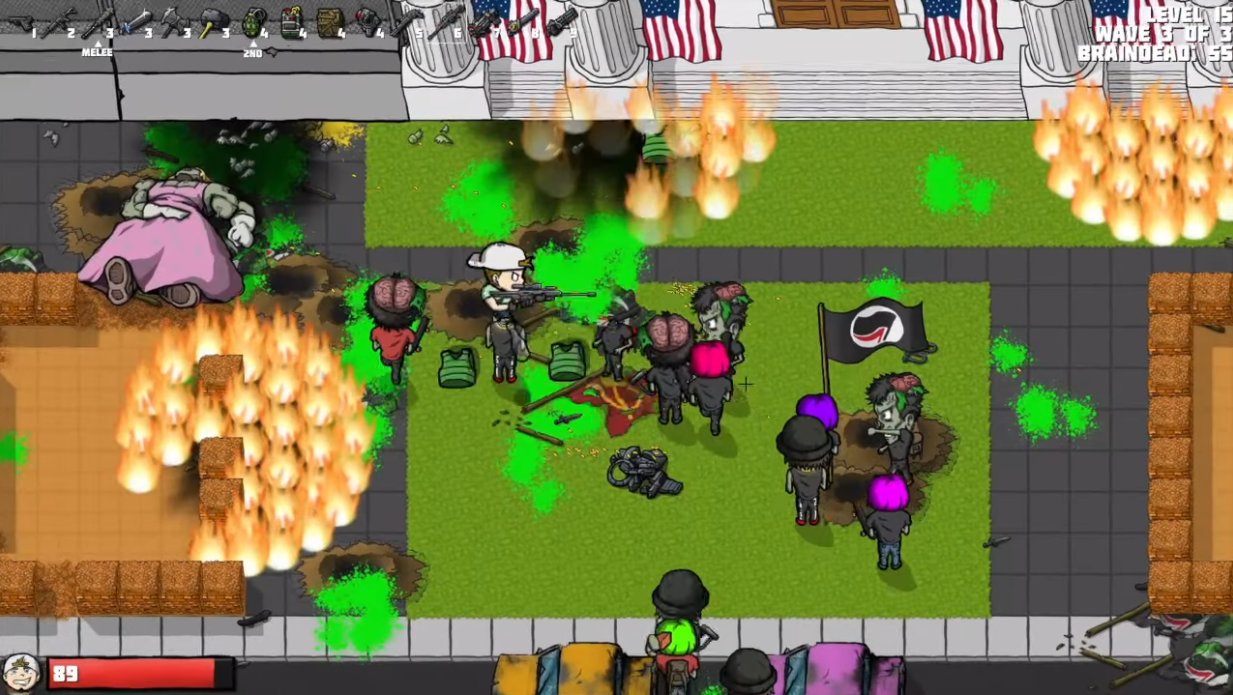 Walker continued to fume on Twitter, as users accused him of lying about his portrayal of the Rittenhouse case. He initially asked for the lies to be listed so he could address them, which Evelina Hahne happily did- the wife of William Hahne.

“If you were a serious journalist you wouldn’t spread lies,” berated Hahne. “1. Two out of three white men who got shot was armed, one with a gun and one with a skateboard. Yet you call them ‘unarmed’. 2. You say that ‘he got away with killing people’, but what he actually ‘got away with’ [was self-defense – according to the law and the verdict itself.]” 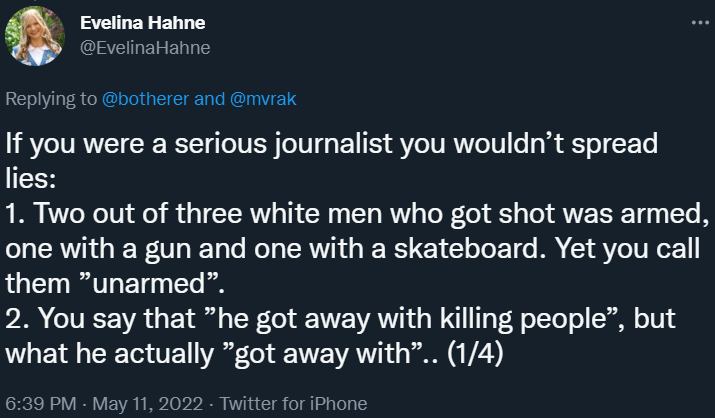 “3. You say that the enemies are being called ‘brainless’ but you can see their brain, but they’re not called brainless but braindead. They still have a brain, it’s just not working,” Hahne continued. 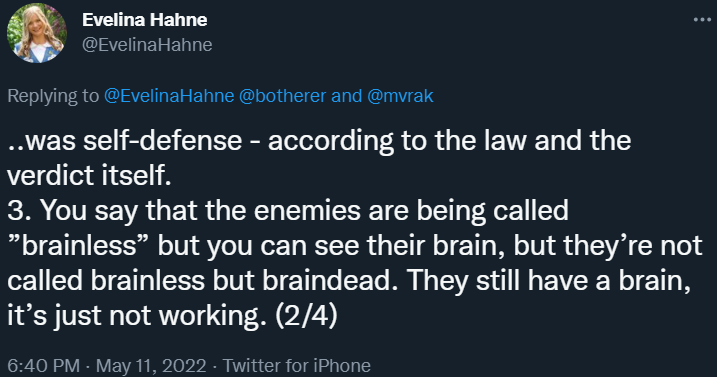 “You cite Alternative for Sweden’s politics,” Hahne explained, in reference to William’s political party, “and state that it’s ‘classic racism’, although nothing in the citing is about other people than Swedes. No minority people are being pointed out and therefore, by definition it can’t be racism.”

“You claim that the game ‘doesn’t make any statements’ and that the main character could be anyone,” Hahne concludes, “but the message hasn’t gone unnoticed by anyone which you also say when you talk about the overwhelmingly positive reviews. The message is obvious to everyone.” 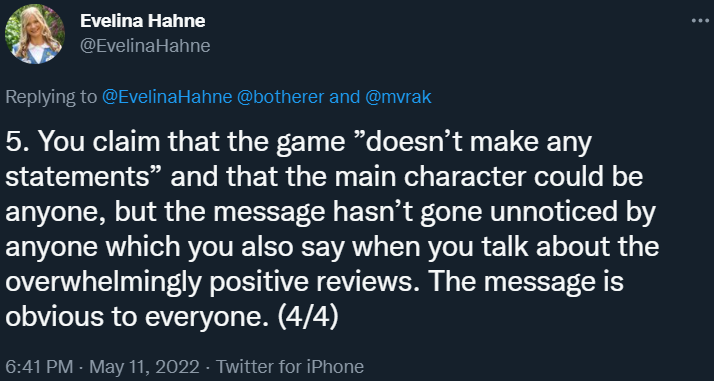 “Please go away, actual Nazi,” Walker dismissed. “‘Please name the lies, and I’ll be sure to address them.’ Another lie!” mocked Hahne. 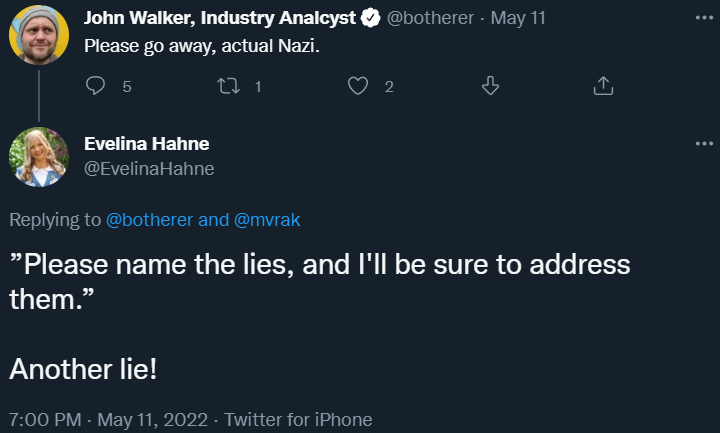 As for Acquitted, it is likely to remain on Steam for the foreseeable future. Valve announced back in 2018 they would allow “everything,” provided it was not illegal or “trolling.” This came after pornographic game makers believed their games were being removed from the platform, only for it to later be clarified the games were being re-catagorized under the new adult games section.

Even so, several adult games with darker themes have been removed from Steam, including Evenicle 2 and Taimanin Asagi. Steam also blocked adult games for German players, after German law ruled their age verification was insufficient. 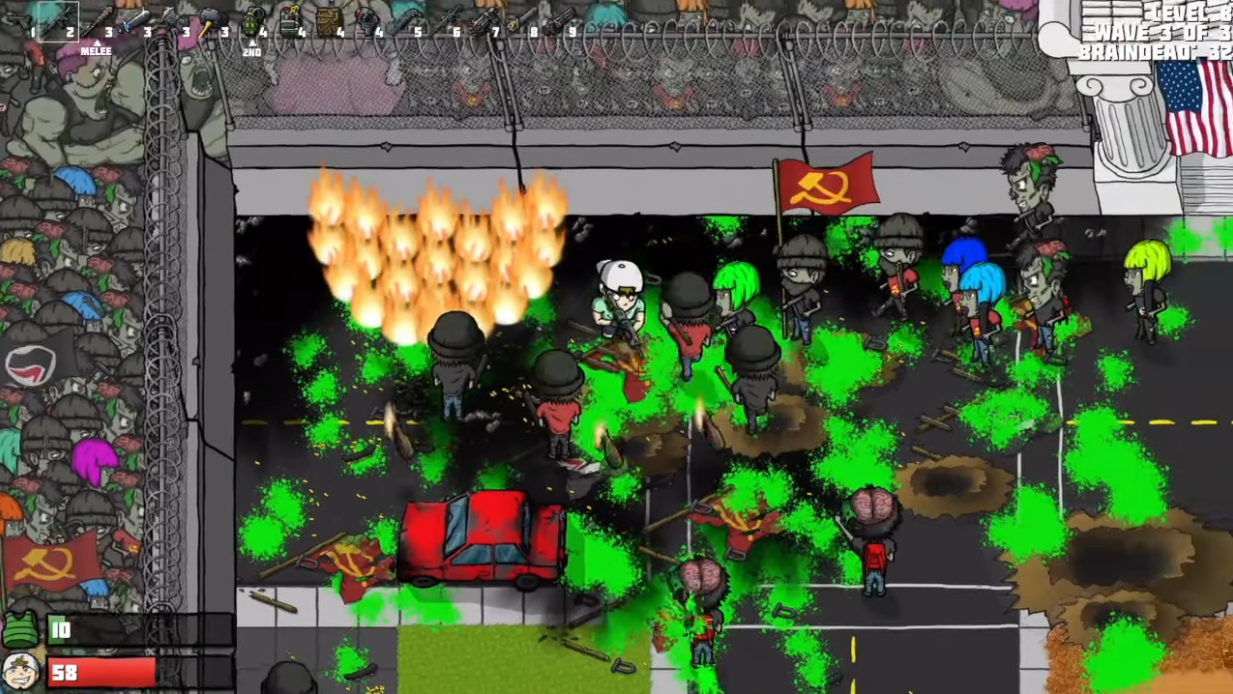 Should a game parodying a real-life incident provide greater commentary? Should those aiming to make commentary make something more grandiose? What do you make of Walker’s attack on Hahne and his failure to address his lies? Let us know what you think on social media, and in the comments below.