In a crushing blow for sentai fans and children of the 90s everywhere, beloved Power Rangers franchise mainstay Jason David Frank has tragically passed away at the age of 49. 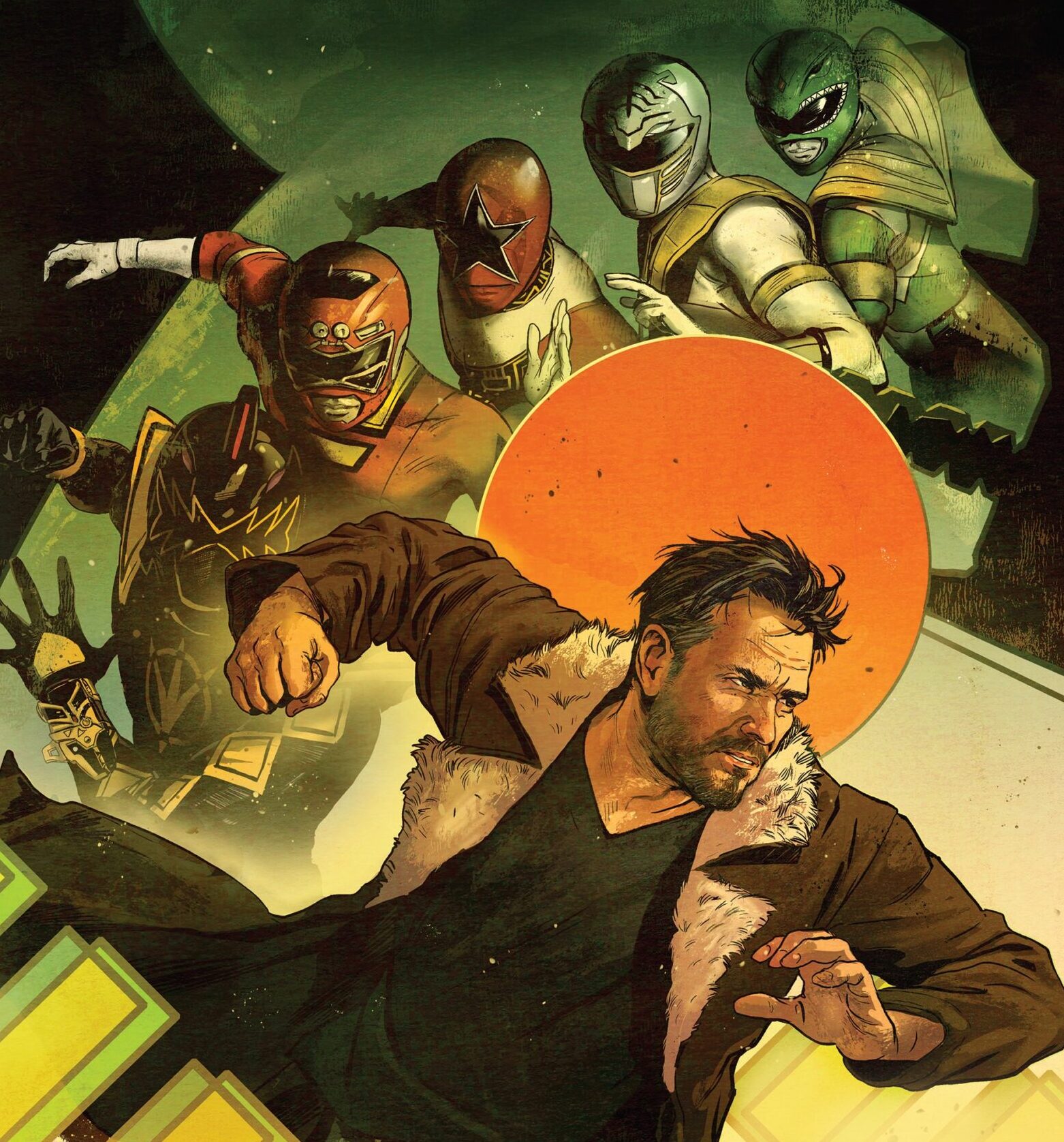 The many Ranger lives of Tommy Oliver (Jason David Frank) on the cover to Power Rangers: Soul of the Dragon (2018), BOOM! Studios via Digital Issue

Frank, who portrayed series anti-hero-turned-hero-and-mentor Tommy Oliver up through 2018’s Power Rangers Ninja Steel, was first reported as having passed on November 19th, courtesy of whispers on social media. 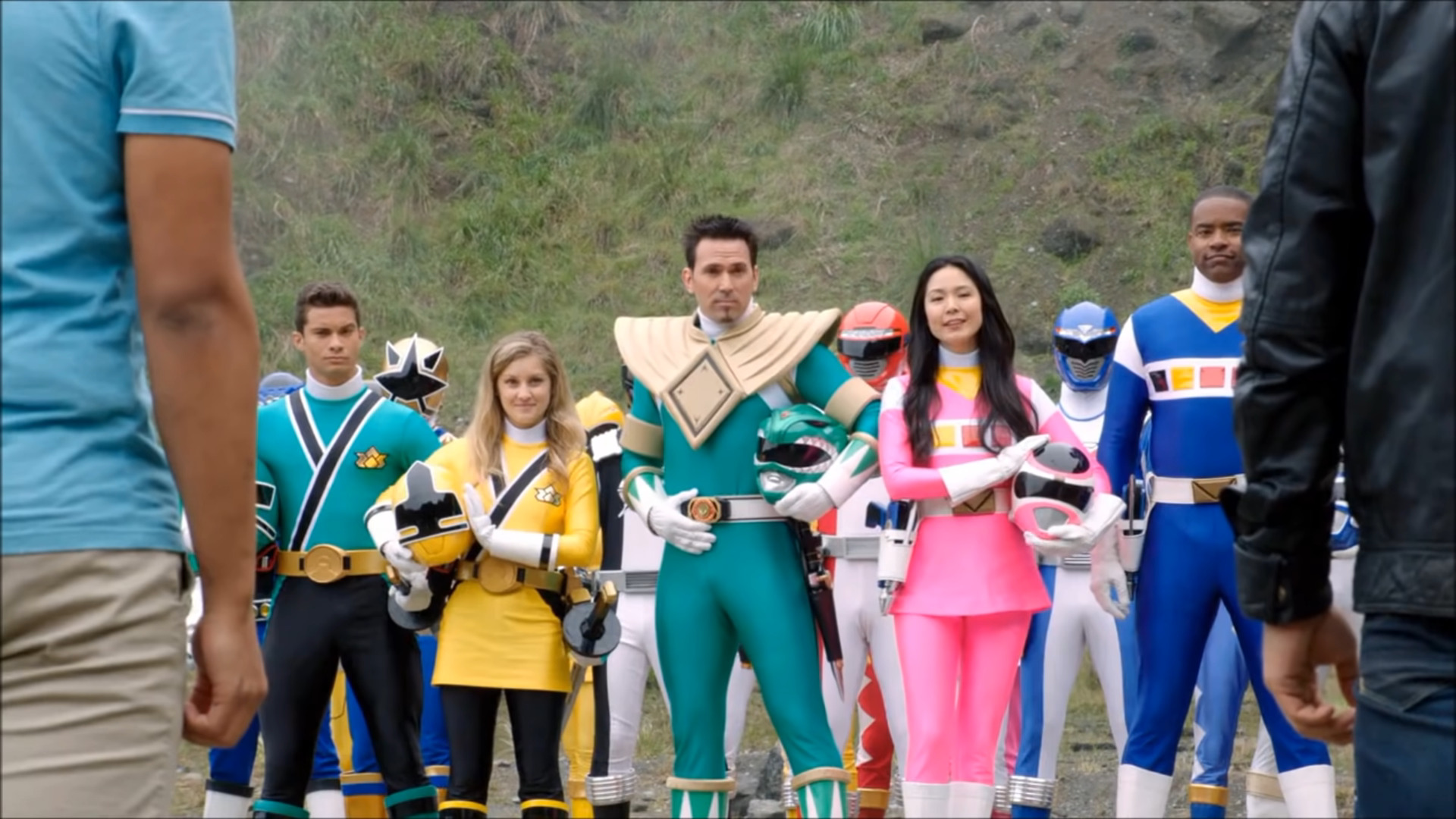 While many fans held out hope that this news was yet another typical internet hoax, it would unfortunately be confirmed by his manager, Justine Hunt, the very next day.

“[We ask for] privacy of his family and friends during this horrible time as we come to terms with the loss of such a wonderful human being,” Hunt wrote in a statement provided to the Associated Press. “He loved his family, friends and fans very much. He will be truly missed.” 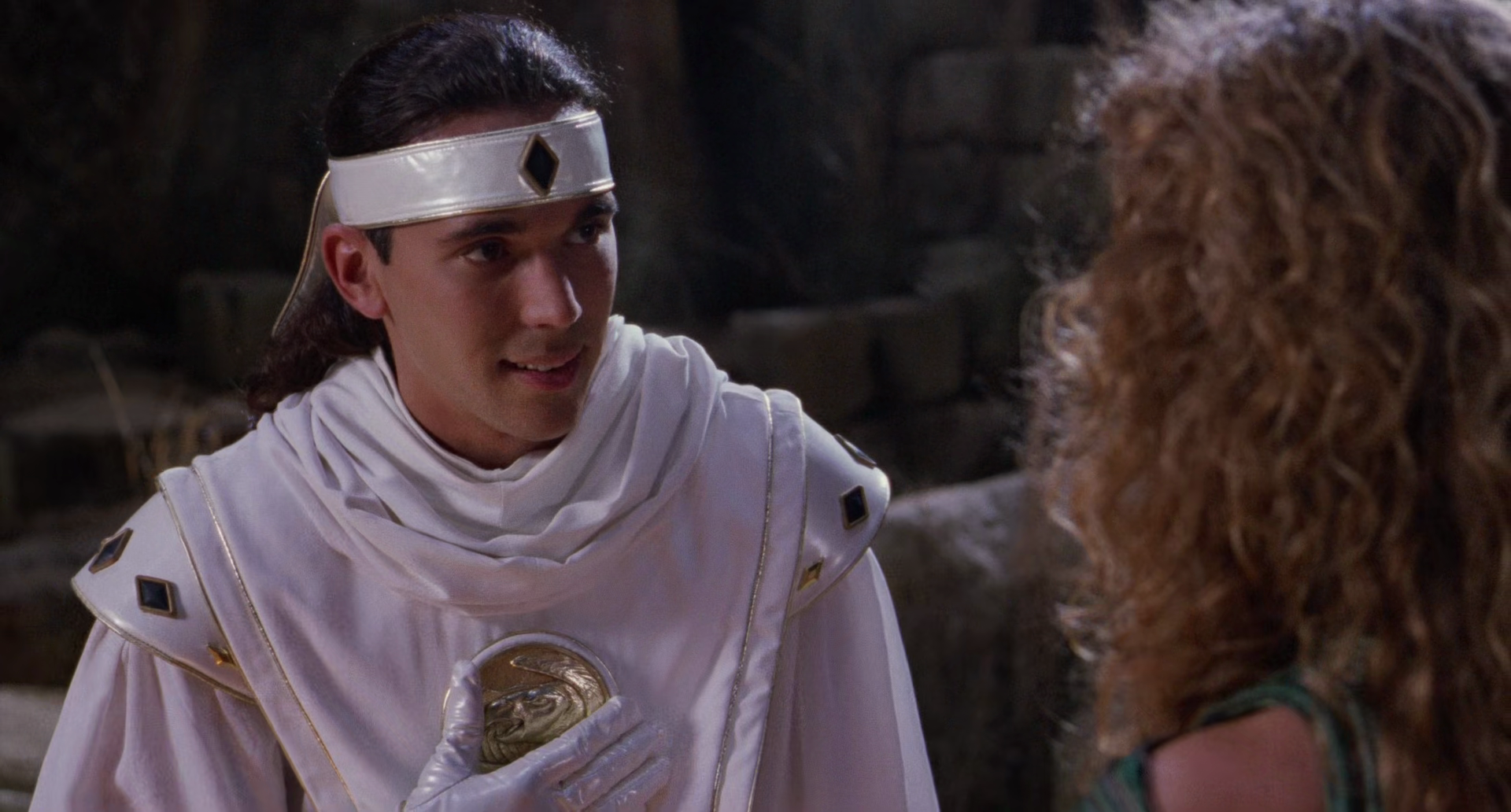 As of writing, Frank’s official cause of death has not been confirmed. However, according to “sources with direct knowledge” who reportedly spoke to TMZ, the actor’s death was the result of an apparent suicide.

Frank is survived by four children, three from his first marriage and one from his second. His second wife, Tammie, filed for divorce in August.

Born in Covina, California in 1973, Frank began his tokusatsu career with his very first role, being cast as the counterpart to Choujinki Metalder‘s Ryusei Tusrugi, Adam Steele, in America’s first attempt at localizing the series, Cybertron.

Though Frank would be cut from the series during its post-pilot retooling into VR Troopers, this temporary setback would open the door for him to land his career defining role as Mighty Morphin’ Power Rangers‘ resident bad boy, Tommy Oliver. 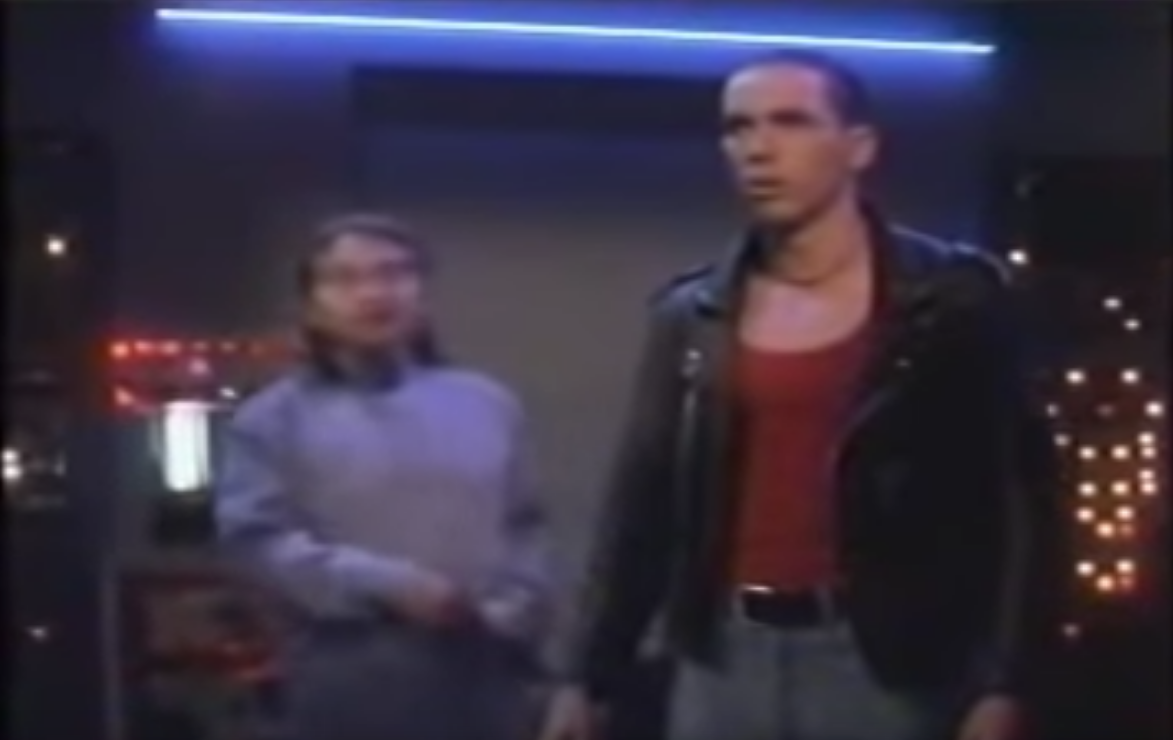 Adam Steele (Jason David Frank) prepares to transform into Cybertron for the first time in the original pilot for Cybertron (1993), Saban Entertainment via YouTube

Cast as the standard ‘evil’ variant of the series’ eponymous team, Frank’s original role as the Green Ranger was surprisingly only supposed to last for a total of fourteen episodes, culminating with his exit from the series in the Season 2 episode “Green No More”. 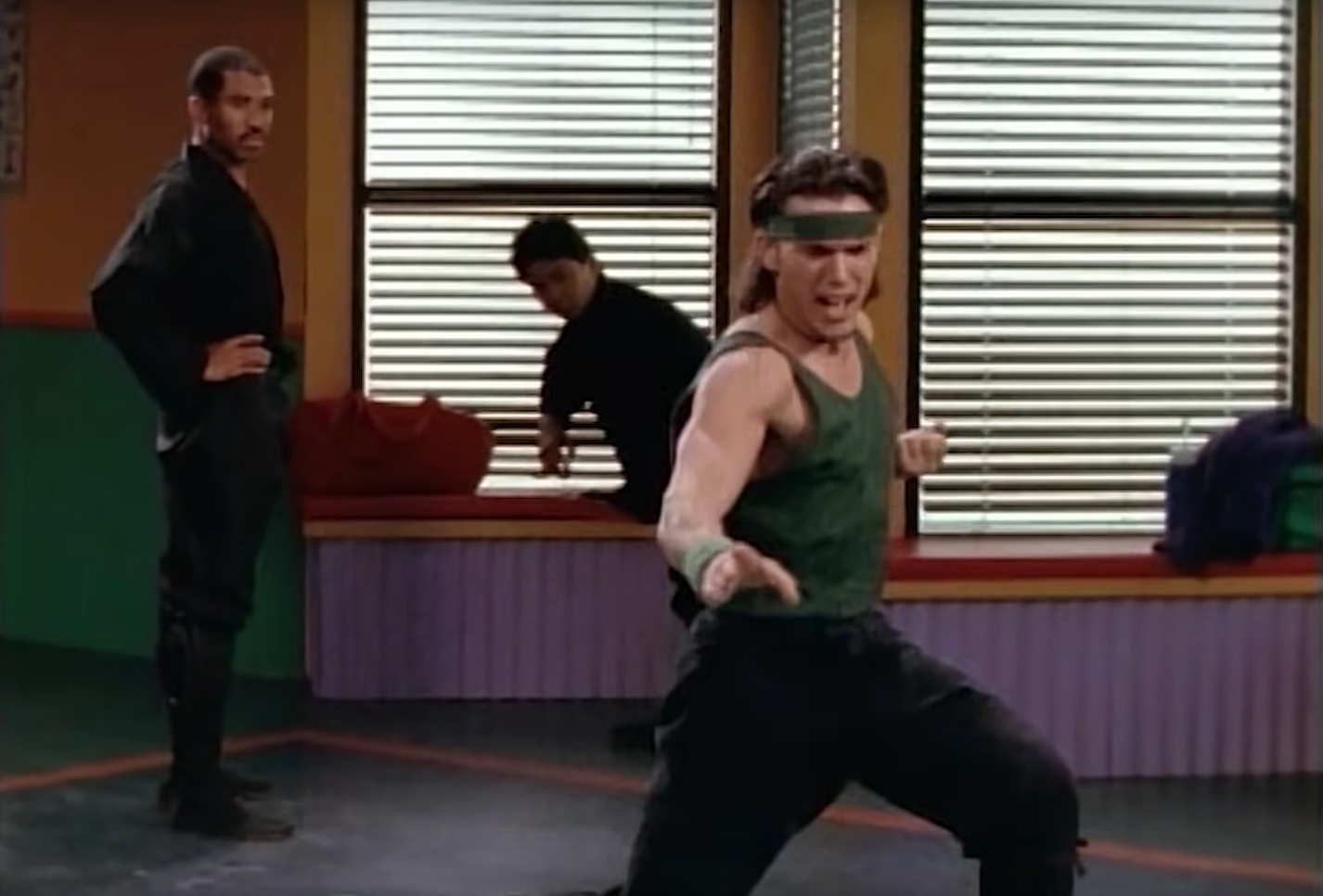 However, much to both the producers’ and Frank’s surprise, his brief performance as Tommy ended up immediately endearing the character to audiences.

As such, rather than waving him off into that Green sunset, Frank was brought back in a more permanent capacity, with Tommy later being reintroduced to the series as the Tigerzord-driving, Saba-wielding White Ranger. 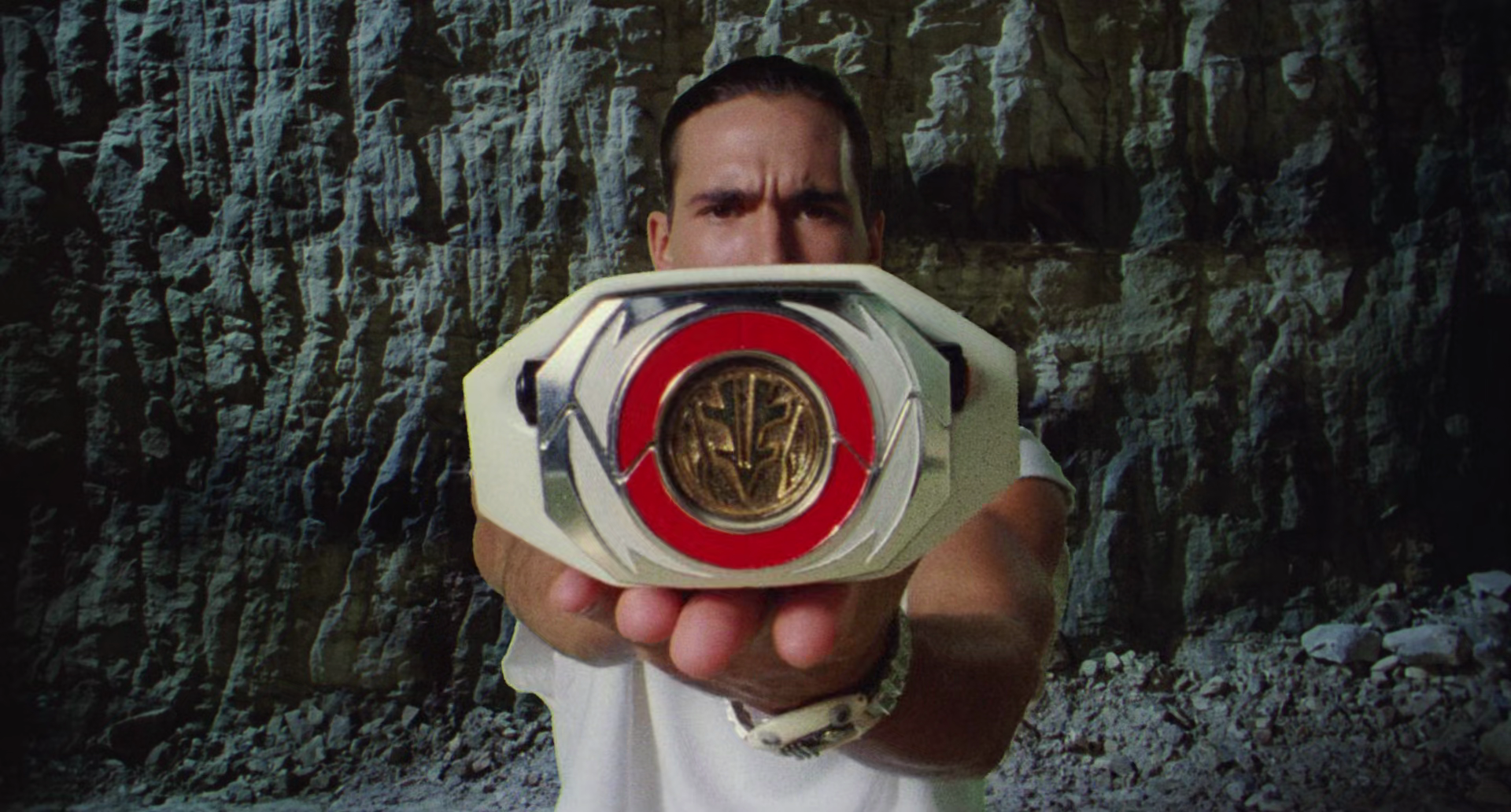 From there, Frank’s American sentai career would see him take up the mantle of both the Zeo and Turbo team’s Red Ranger, as well as Dino Thunder’s Black Ranger.

The late actor’s most recent reprisal of the role – which now sadly also stands as his final overall – was in the Ninja Steel episode “Dimensions in Danger”, wherein he appears alongside a number of other past Rangers to assist the series’ titular team in the fight against the villainous Draven and his evil army. 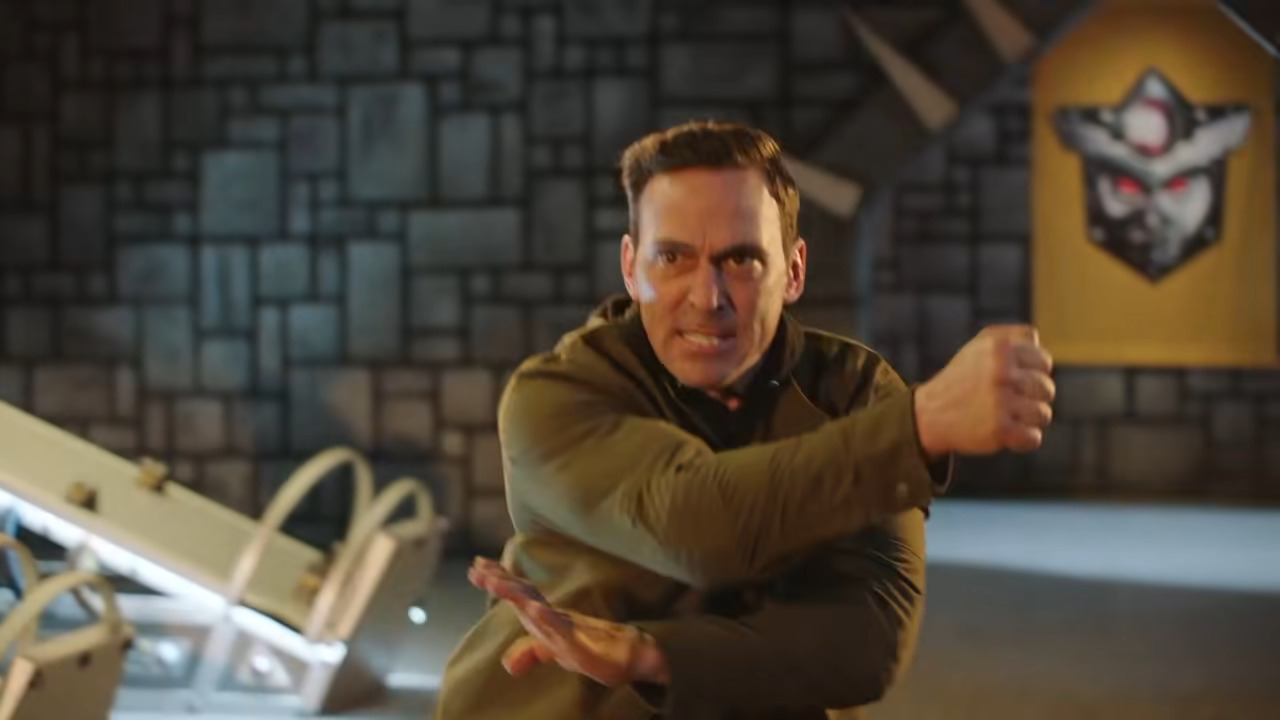 Following his tenure as a mainline Power Rangers cast member, Frank, already an accomplished practitioner of various styles, would continue to train in martial arts (even developing his own hybrid style, Toso Kune Do, in 2003).

This passion would eventually lead him to explore a career in competitive MMA, where he would go on to secure an undefeated record across five fights in 2010, winning four in the amateur circuit and one in the professional.

Though his acting career would be temporarily set to the back-burner during this period, Frank would feature as Bloodshot in Valiant’s Ninjak vs. the Valiant Universe short film. 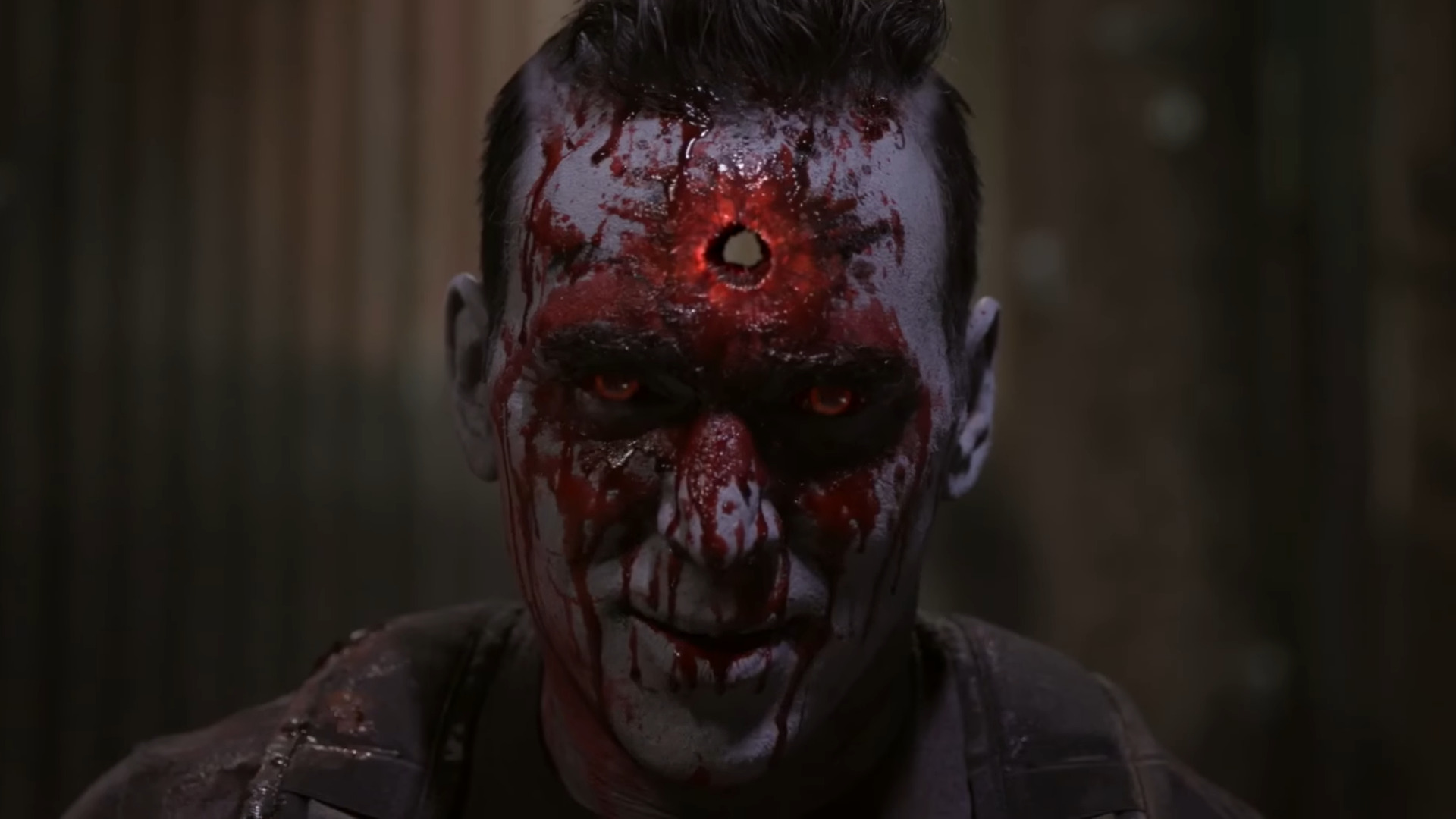 Bloodshot (Jason David Frank) heals after being shot by a group of thugs in Ninja vs the Valiant Universe (2018), Bat in the Sun via YouTube

In 2020, Frank, along with prominent comic book fan film production company Bat in the Sun, launched a Kickstarter campaign for a live-action martial arts film titled Legend of the White Dragon.

Set to feature the actor as the White Dragon, an original toku hero based upon his past Power Rangers roles, the film was originally proposed as a mini-series, but was expanded in scope following an outpouring of fan support and interest in the project. 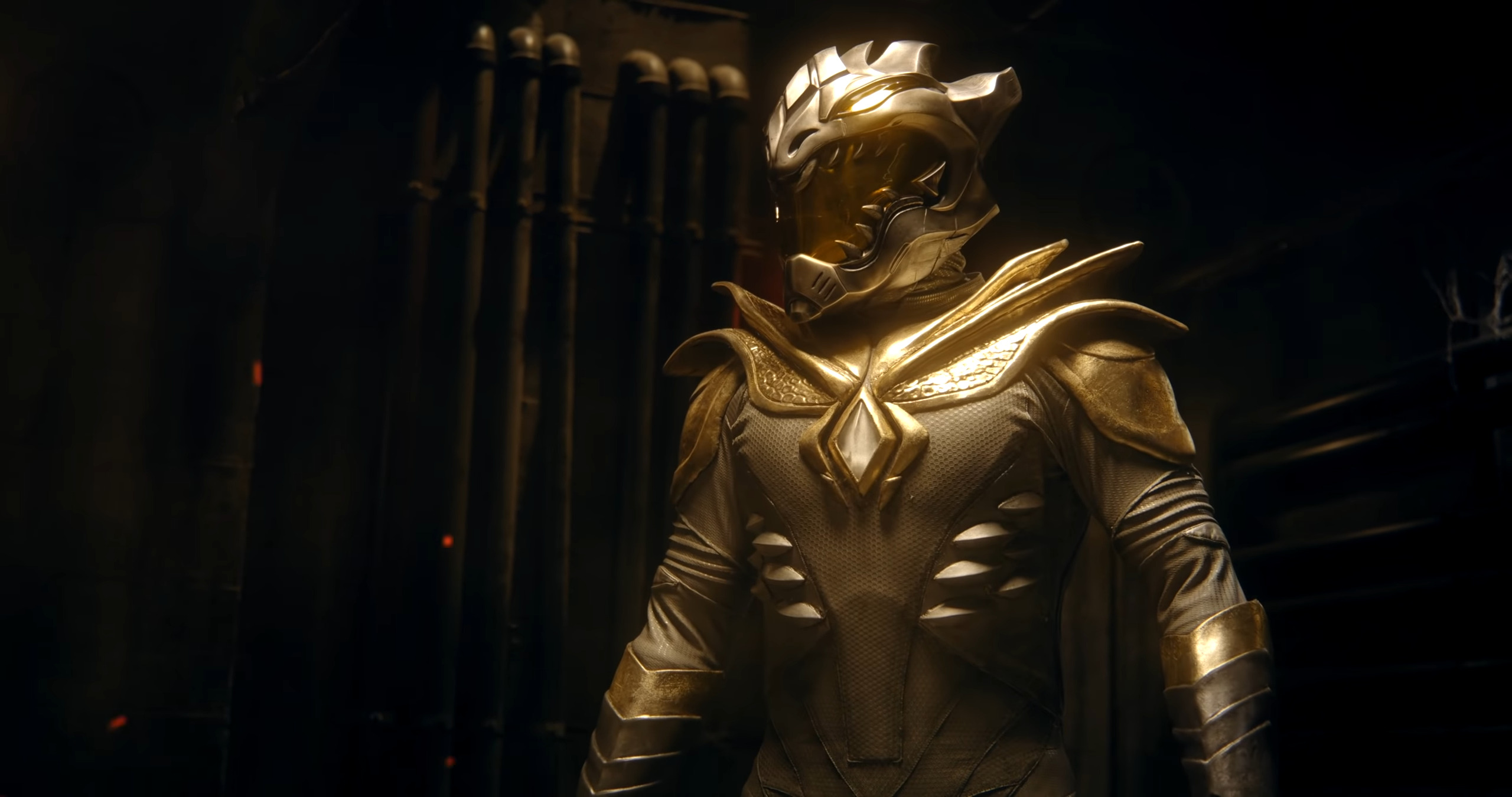 As a result of this expansion, Legend of the White Dragon’s release has been delayed to 2023.

Upon its release, it will mark Frank’s final role. 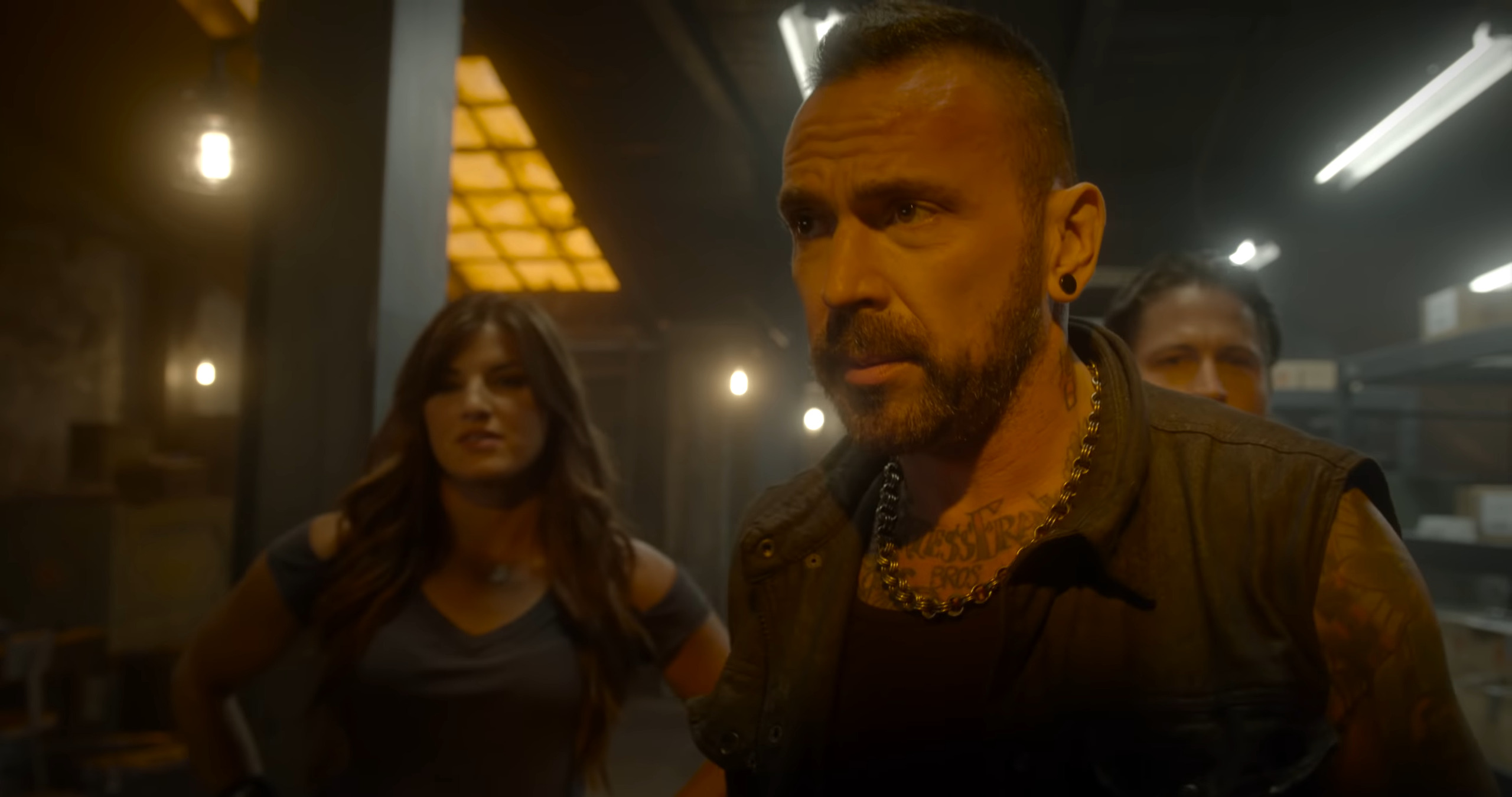 In light of the news of Frank’s passing, tributes from across the industry for the actor began to pour out on social media, most notably from his fellow Mighty Morphin co-stars.

Making reference to the 2001 auto accident death of Yellow Ranger actress Thuy Trang, Black Ranger actor Walter Emanuel Jones shared a picture of himself, Frank, and their fellow original Rangers Austin St. John (Red) and David Yost (Blue) at the 2017 premiere of Lionsgate’s cinematic franchise reboot alongside the caption, “Can’t believe it…RIP Jason David Frank🙏🏾. My heart is sad to have lost another member of our special family.” 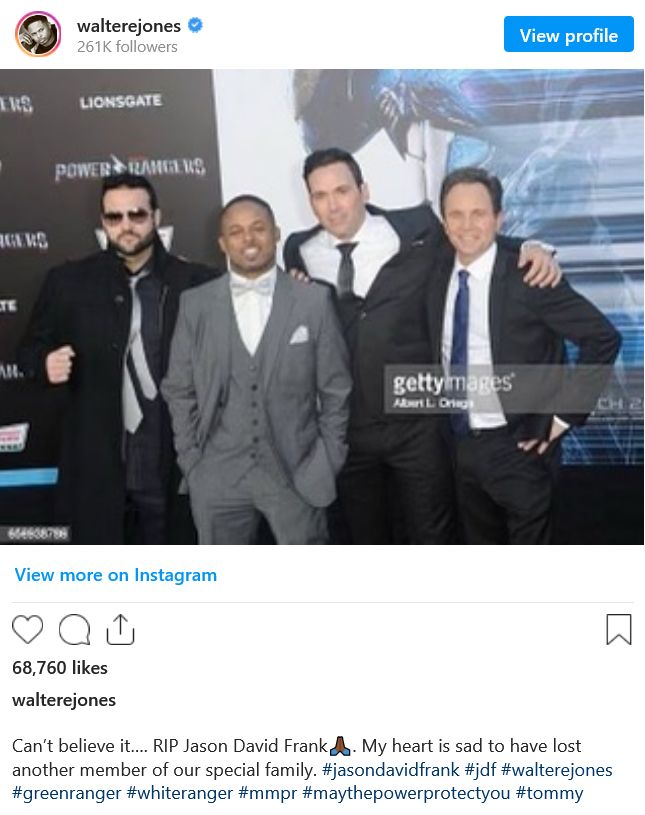 “Jase, you were beautiful and truly unique My life just won’t be the same without your frenetic, hilarious, caring, driven and creative ball of energy,” wrote Pink Ranger actress Amy Jo Johnson. “I will always love you, dear friend. Please Rest now In Peace…” 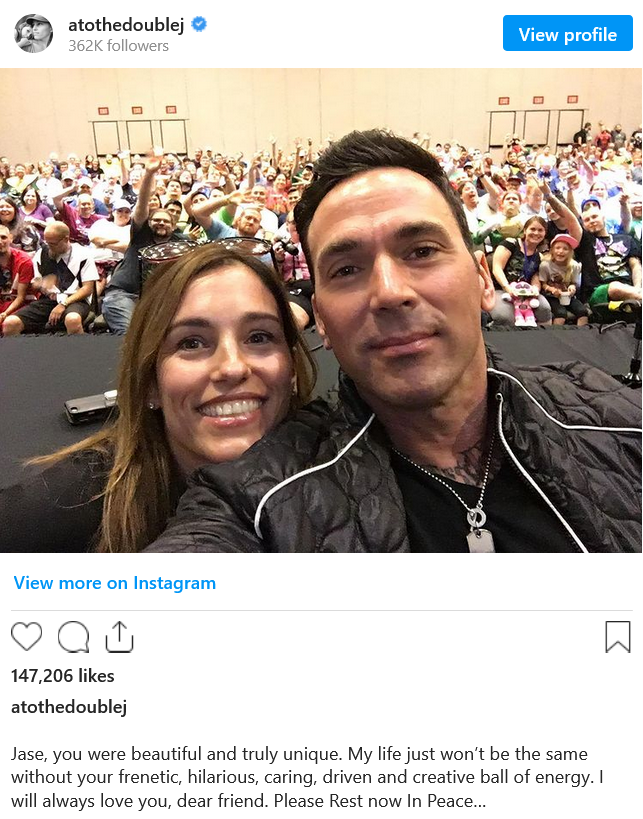 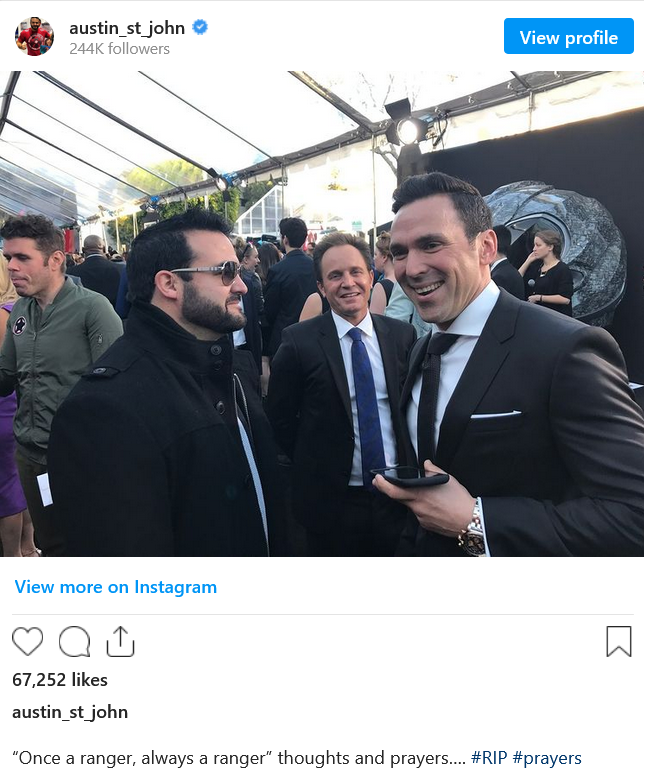 Reaching out from Japan, Frank’s Super Sentai analogue, Kyoryu Sentai Zyuiranger Dragon Ranger actor Shiro Izumi eulogized, “Sad news has arrived today. I heard that Jason David Frank, who was the Dragon Ranger in the Power Rangers, has passed away.”

“I’m shocked by the news of Americans like my siblings,” he added. “Everyone please continue to support Dragon Ranger. Forever and always a Dragon Ranger.”

May the Power protect you. 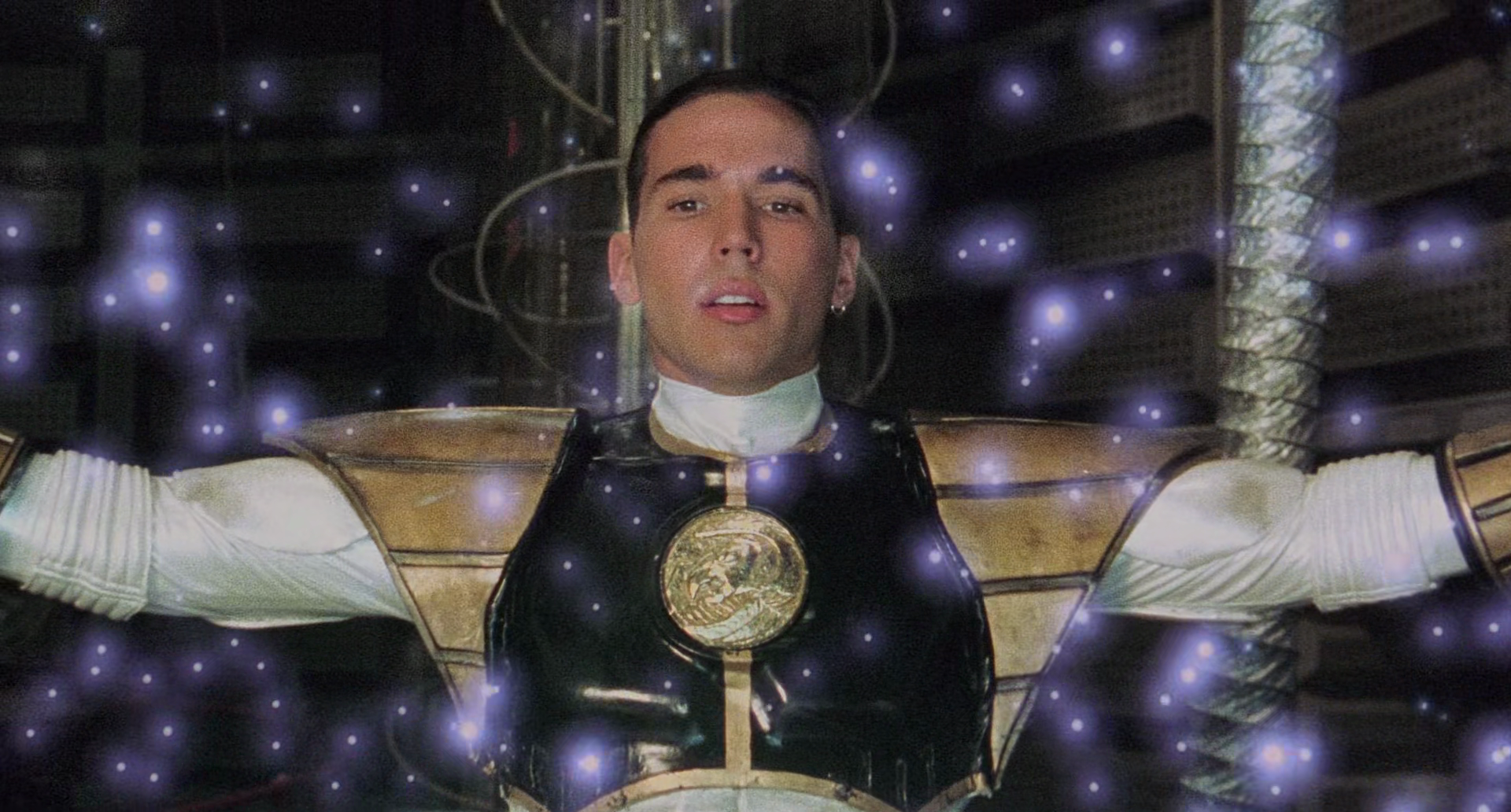 Tommy (Jason David Frank) joins with the other Rangers to revive Zordon in Mighty Morphin Power Rangers: The Movie (1995), Saban Entertainment via Blu-ray