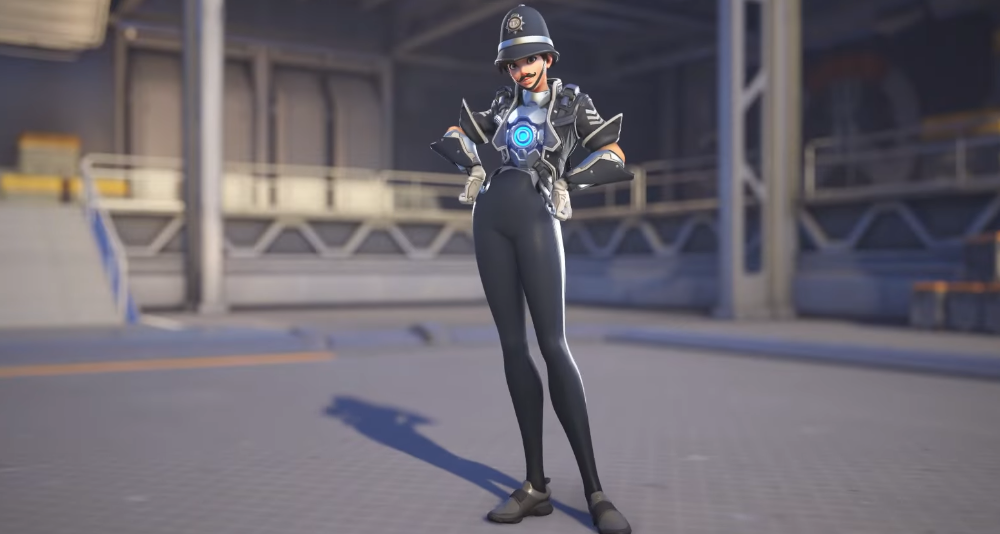 A full body shot of Tracer in her Constable Tracer skin via Overwatch 2 (2022), Blizzard Entertainment

In late November, Kotaku’s Alyssa Mercante reported on Blizzard Entertainment adding the Constable Tracer skin to Overwatch 2. The skin evokes the stereotypical image of a “British bobby,” a classic UK police uniform with a small mustache. At this time of writing, the accompanying bundle on Battle. net appears unavailable.

Mercante argues that the skin is egregious, as were the prior police uniform-inspired skins when they were added. This included 2017’s “certainly tone deaf” Officer D.Va skin, and 2019’s Riot Police Brigitte skin. The latter is of note, due to that occurring the year of George Floyd’s death during his arrest, and ensuing Black Lives Matter-motivated protests and riots. 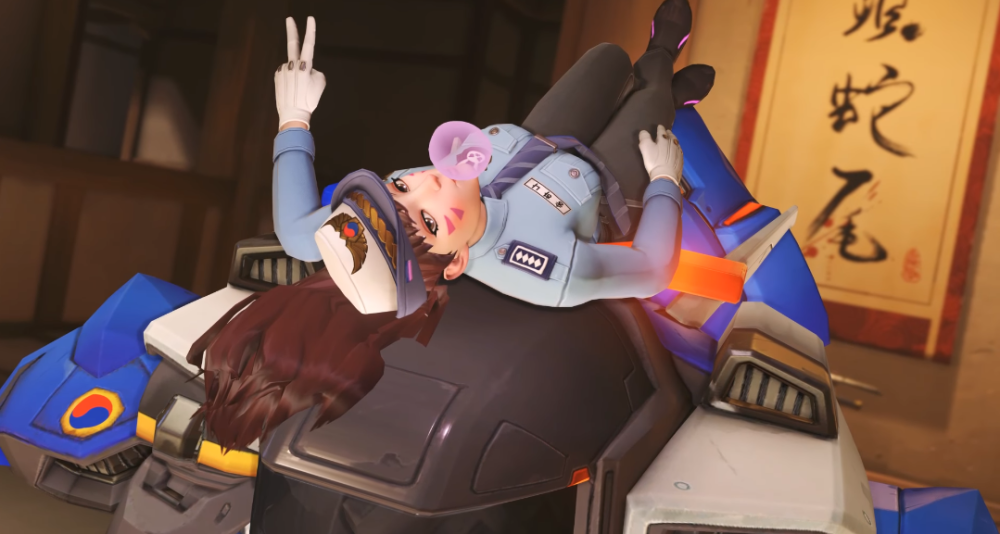 D.Va lazes on top of her mech in her Officer skin, blowing bubblegum and flashing a peace sign via Overwatch (2016), Blizzard Entertainment

The event resulted in pro-Black Lives Matter content in entertainment industries, including video games. Some notable examples are Apex Legends and Spider-Man: Miles Morales, Ubisoft apologizing after the villains of Tom Clancy’s Elite Squad utilized a raised black fist in their iconography, and IGN including links to several supporting charities on their front page, to name a few.

Long after the inciting incident, major entertainment industry companies continue to offer some form of support, or cut ties with those who didn’t, and celebrities keep offering their two cents.

References to the police have also been censored in some video games. Epic Games removed police cars from Fortnite, and Warner Bros. Interactive Entertainment changed Velma’s police-summoning attack in MultiVersus. The move now calls on the Mystery Machine to drag away imposters. 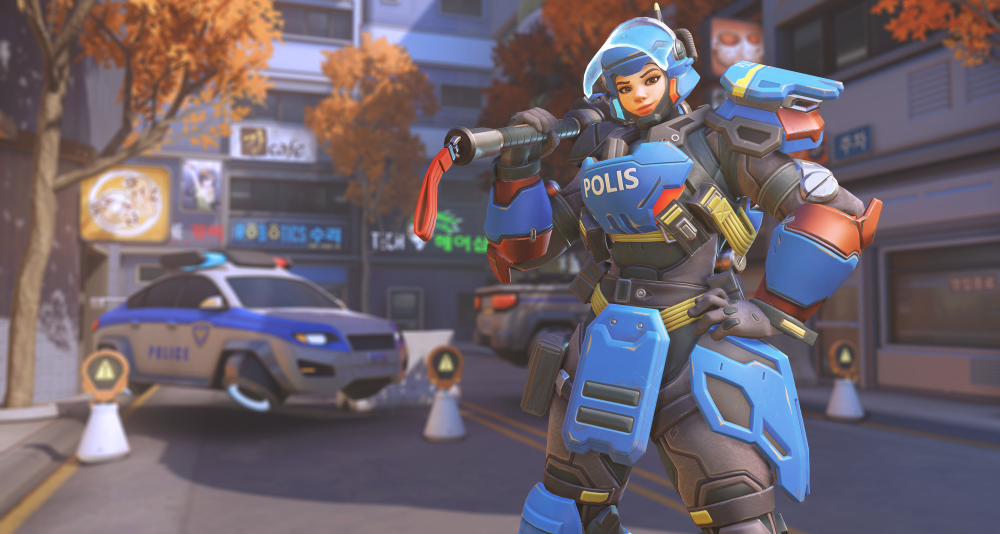 Brigitte in her Riot Police skin during the Anniversary Remix event via Overwatch (2016), Blizzard Entertainment

As such, police-themed content in video games (and media in general) is still a sore subject for some, including Mercante; arguably treating 2017’s Officer D.Va skin with outrage in hindsight.

“Yes, in May of 2019, while America was reckoning with clear and consistent proof that police brutality overwhelmingly affects communities of color and witnessing how protests against that brutality were often met with increasingly militarized police forces,” Mercante prefaces, “Blizzard thought it was a good idea to give a character with a shield a Riot Police skin. Oof.” 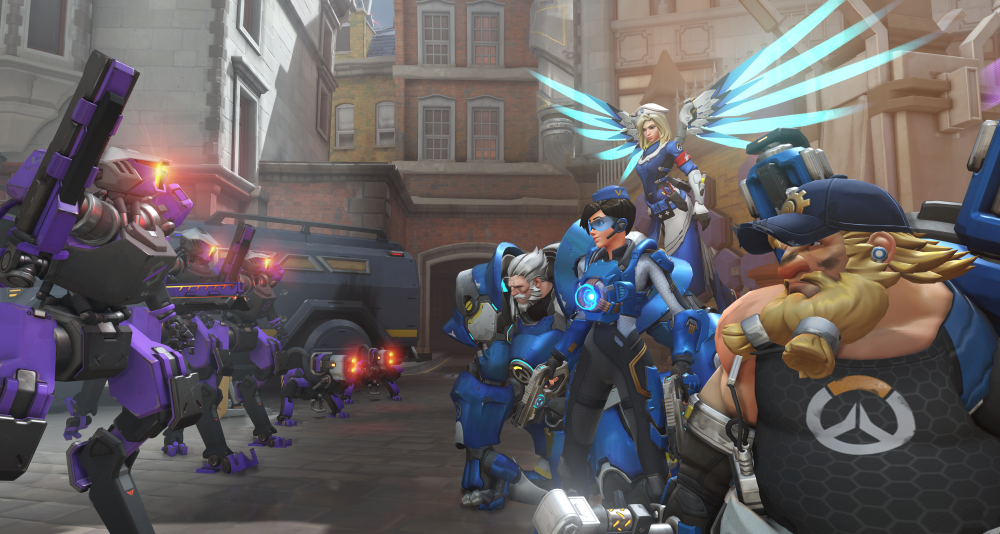 Reinhardt, Mercy, Tracer, and Torbjörn face down with Null Sector Omnics on Kings Row in the Uprising game mode via Overwatch (2016), Blizzard Entertainment

“The in-game cop skins feel like Blizzard is saying the quiet part very, very loud,” she argues. The Kotaku writer explains Overwatch lore as the heroes essentially being “cops who were forced to become vigilantes after their organization is disbanded following investigations into some of their ethically questionable and legally shaky tactics.”

While the Overwatch organization helped solve the Omnic Crisis — where decommissioned automated robot factories started to produce armed machines — a group of Omnics called Null Sector would later attempt a revolt in the UK due to inhumane treatment. Tracer was sent to help after begging her superiors, against the express wishes of the UK Prime Minister for Overwatch to not get involved. 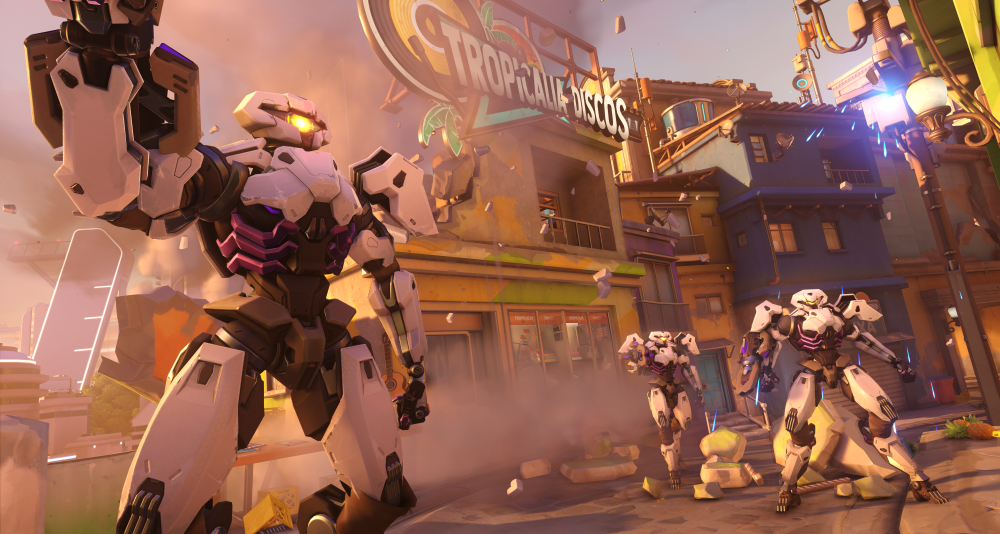 Mercante describes Null Sector as “an omnic revolutionary group often referred to as terrorists,” possible suggesting their methods weren’t purely violent. This is despite their methods being exactly that — the “Kings Row Uprising” started with terrorist action by them, and their continued “war” across major cities around the world in Overwatch 2 (with players fighting them in PvE game modes in 2023).

She even admits new hero Rammatra is “the leader of that very same terrorist organization Tracer was sent to stop. I wonder how he’d feel about seeing Tracer in a cop skin?”

Continuing, Mercante summarizes that the Overwatch organization was “a global police force with virtually unfettered reign. That’s why this Tracer skin is so incredibly frustrating,” she emphasizes: “Blizzard could choose to keep the ‘cop’ bit quiet, but seems determined to shout it from the rooftops of King’s Row—ya know, the place where the cops were sent to violently quell an uprising.” 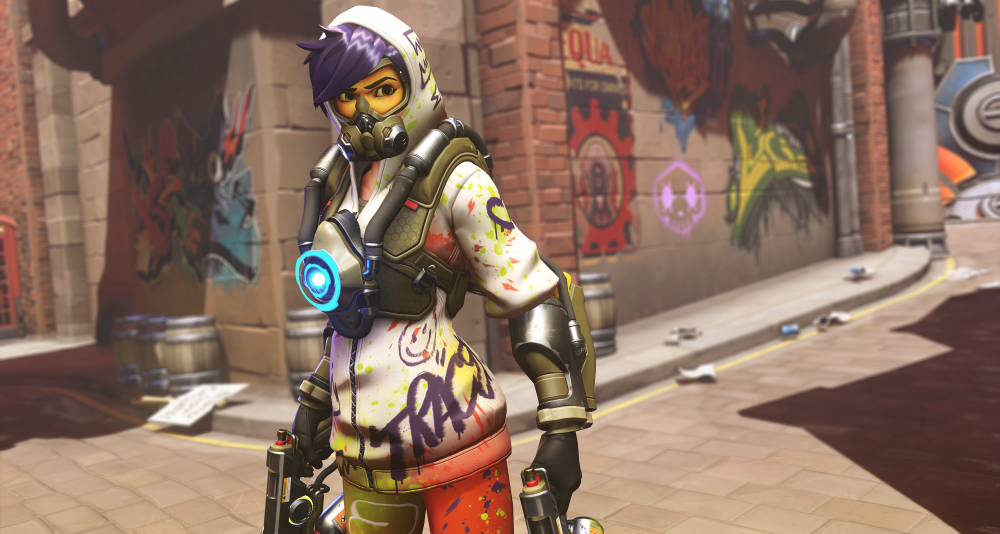 Tracer in her Tagged Tracer skin during the Anniversary Remix event via Overwatch (2016), Blizzard Entertainment

“And while it’s cute to see Constable Tracer (canonically a lesbian) doing a little gender-bending, Blizzard could achieve the same effect by giving her a Freddie Mercury-inspired skin,” Mercante suggests. “It would go quite nicely with Moira’s Bowie look, and it wouldn’t have any of the problematic implications that come with adding yet another police-themed cosmetic into the game.”

“Interestingly, Overwatch has yet to drop a cop skin for the most appropriate character: Roadhog.” As said character has a pig motif in his design, Mercante’s sneering conclusion is obvious. She also noted in the article that “Kotaku reached out to Blizzard for a comment regarding the ideology behind this latest cop skin.” 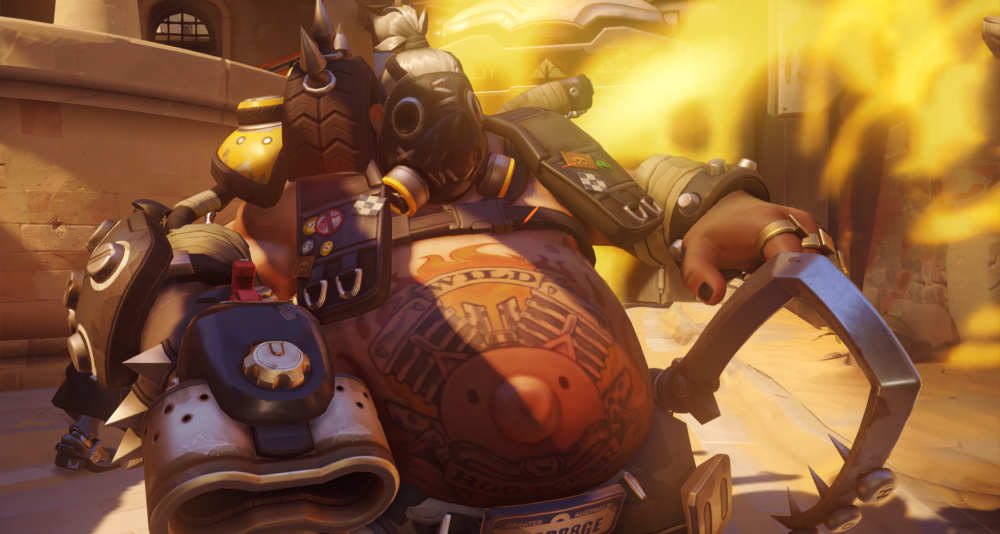 Roadhog trundles through the battlefield via Overwatch (2016), Blizzard Entertainment

RELATED: IGN Staff Reviewer Who Praised ‘The Last Of Us Part II’ As A “Masterpiece” Hired By Naughty Dog, Gets Social Media Backlash

Erik Kain took to the plate against Mercante in his editorial for Forbes, deeming it “Silly Outrage Over Police In Video Games.” He opens noting that it’s not even his first time, having previously written about the outcry against Overwatch police skins 2019 — deeming complaints by Vice “Ridiculous Clickbait.”

Returning to his latest piece, Kain briefly expresses how he felt the skin was poorly designed, but pivots back to discuss how “police are apparently no longer allowed to be in video games. Period. There can be soldiers, terrorists, bank robbers, cannibals and any number of other things but not cops. Cops are, in this particular cultural moment, the worst. Yeah.” 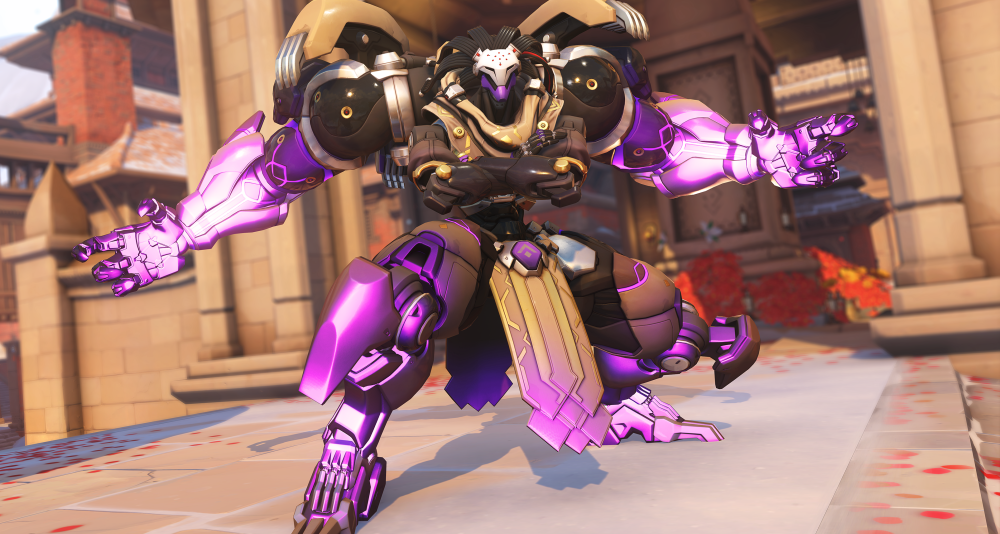 Kain argues that Mercante is “mostly just assuming her readers already agree with her. It’s more finger-wagging than case-making.” He then mocked Kotaku reaching out to Blizzard Entertainment over the “ideology” of the skin. “The ideology behind putting a cop skin in a video game about futuristic cops? That seems a bit on-the-nose as far as questions go but okay.”

“I hope the folks at Blizzard got a good chuckle reading that request,” Kain mocks.

He then derides Mercante’s quip about Rammatra. “Gee, I wonder how Tracer feels seeing the leader of the terrorist organization she was sent to stop? But also: It’s a video game about shooting at the other team in colorful multiplayer matches. Why are you spending your time wailing and rending garments and gnashing teeth over this stuff?” 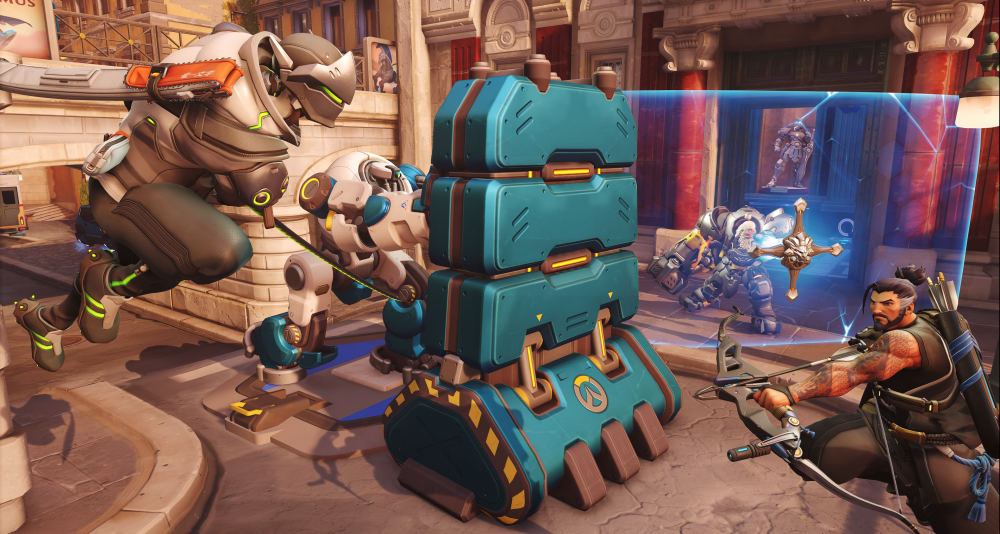 Genji, Reinhardt, and Hanzo support the robot moving the barricade in Push via Overwatch 2 (2022), Blizzard Entertainment

Kain questions why soldiers in Call of Duty “illegally travel to third-world countries to stop terrorists” didn’t garner outrage from Mercante. “A Constable Tracer skin somehow ranks higher on the outrage totem pole? (Franky, neither of these things is outrageous, I just find the ranking a bit confusing).”

He then denies her argument that Blizzard should “Keep the ‘cop’ bit quiet” as she failed to explain why. “Her assumption is apparently that police are not just bad but uniquely bad—to the point that police should never be included in video games for any reason (unless they’re included as a critique of police, I suspect).” 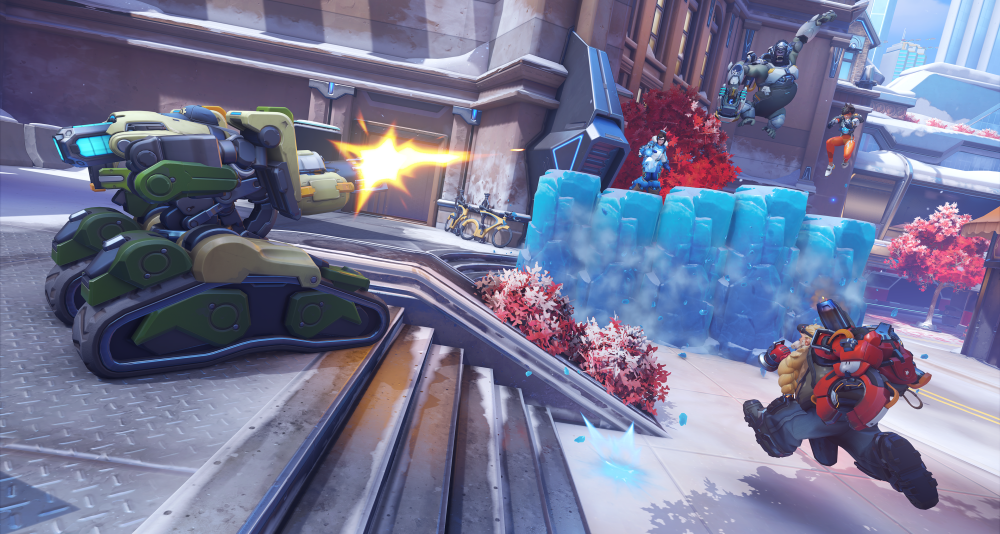 Kain maintains that while he does believe “there are bad cops and corrupt police departments” and supported reform efforts, he found “this kind of argument juvenile and naïve in the extreme.” He criticizes how those who condemn the entire police force until they are in need of them.

“It’s not perfect, I get it, but we don’t live in a Utopia where nothing ever goes wrong. Violent criminals really do exist, some of whom are capable of doing terrible things. I get tired of this notion that all cops are somehow bad and that even including something like an innocuous constable skin in a multiplayer shooter is morally questionable,” Kain defies. 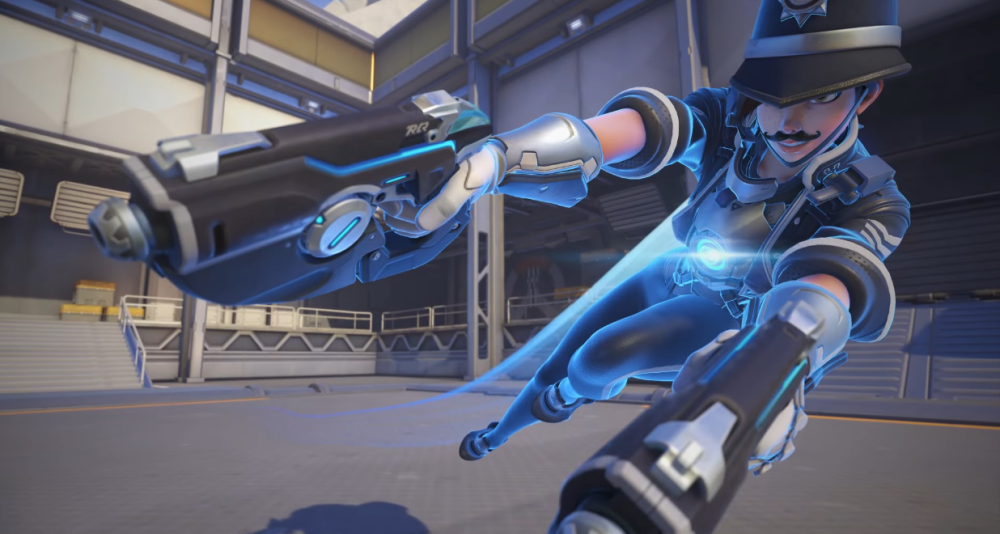 Tracer in her Constable Tracer skin, blinking around with Pulse Pistols drawn via Overwatch 2 (2022), Blizzard Entertainment

“There is no case being made here beyond ‘cops are bad, Blizzard is bad to include a cop skin’ and that’s just not an argument. It’s a declaration. It’s preaching to the choir,” he stamps out.

Nonetheless, Kain proposes the Roadhog police skin is a “good idea,” and calls on Blizzard to “Make it so.” Sarcasm or not, both Mercante and Kain’s pieces show why Blizzard Entertainment may avoid doing that in Overwatch 2, or even overtly unflattering allusions to police in other games.