Science fiction is an interesting genre, as it’s technically a springboard for stories to dovetail into other forms of storytelling. The ’90s was a period where a wide assortment of clever and creative science fiction films got the green light, producing some of the most memorable gems of the decade, and beyond.

There were sci-fi comedies, action epics, and even dramatic stories that challenged the concept of humanity, and the future. The best ones continue to stand the test of time, even if their CGI and visual effects have taken a few knocks over the following two decades. 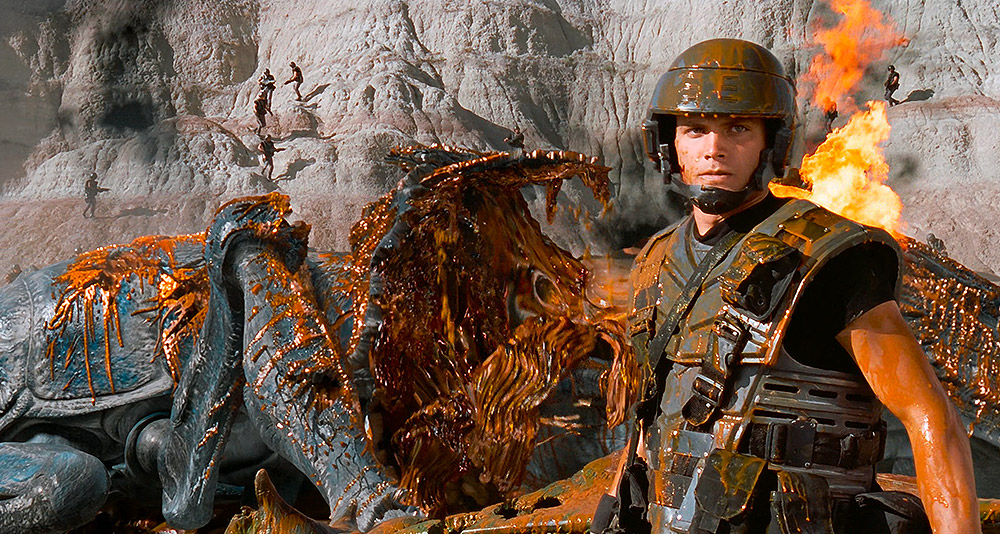 Starship Troopers was a simple premise based on the 1959 novel by Robert A. Heinlein, which glorified the concept of a strong military in opposition to an alien force known as the “Bugs.” RoboCop and Total Recall director Paul Verhoeven adapted the source material according to his own storied experiences with war, and cranked out a fun, entertaining, and incredibly gory sci-fi hit.

Behind all of the special effects and overt political and social satire was a very fun and exciting adventure. The characters were likeable, the action scenes were thrilling, and the gritty comic book violence helped tamp down whatever political rhetoric framed the edges of the story. 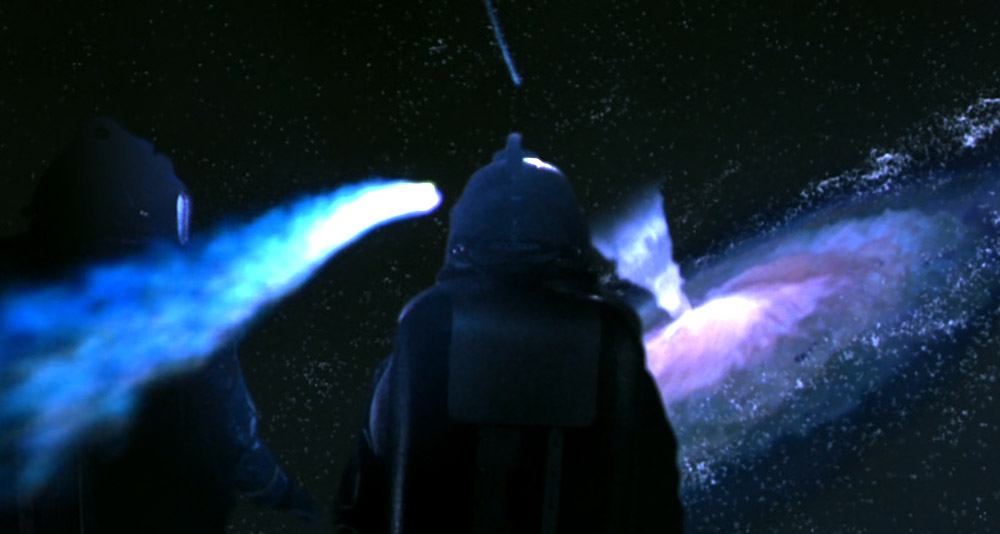 Norman and Beth replay a log from a ship’s recorder in ‘Sphere’ (1998), Warner Bros.

Sphere is an underappreciated classic hampered by a budget that prevented the filmmakers from bringing their full vision to life. Yet, what’s on screen is fantastic, with a level of tension rarely glimpsed in sci-fi films. The story involves three experts brought in by the U.S. Navy to investigate a strange golden sphere sitting on the floor of the Pacific Ocean.

Little do they realize the powers hidden within the sphere, which begin to manifest through the crewmembers. What follows is a series of cataclysmic events, rampant paranoia and distrust among the survivors, which threatens to kill them all. As the revelations about the sphere are uncovered, the film suddenly shifts into a scathing commentary about the human condition. 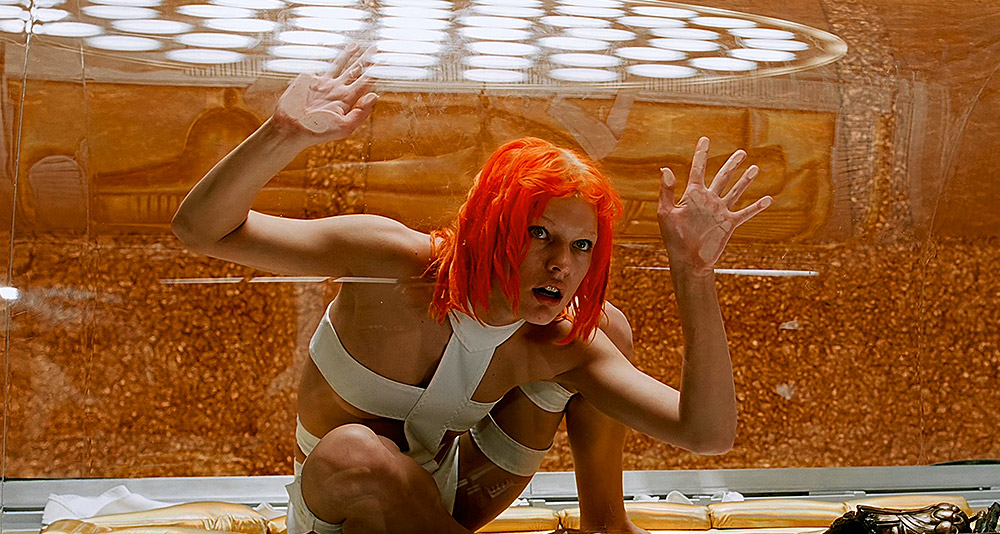 The Fifth Element was a major success, due in large part to its ability to craft a fun and enjoyable moviegoing experience. It doesn’t take itself too seriously (an understatement, to be sure), the casting is both unorthodox and perfect at the same time, and the visuals are fresh, inventive and entertaining.

The story is a bit wonky, but that’s part of the film’s charm. In essence, it’s about little more than a down on his luck cab driver who happens upon a beautiful woman who holds the secret to saving the universe from a terrifying evil force. Laughs, tears and cheers are what make up the film’s formula, turning it into an instant classic. 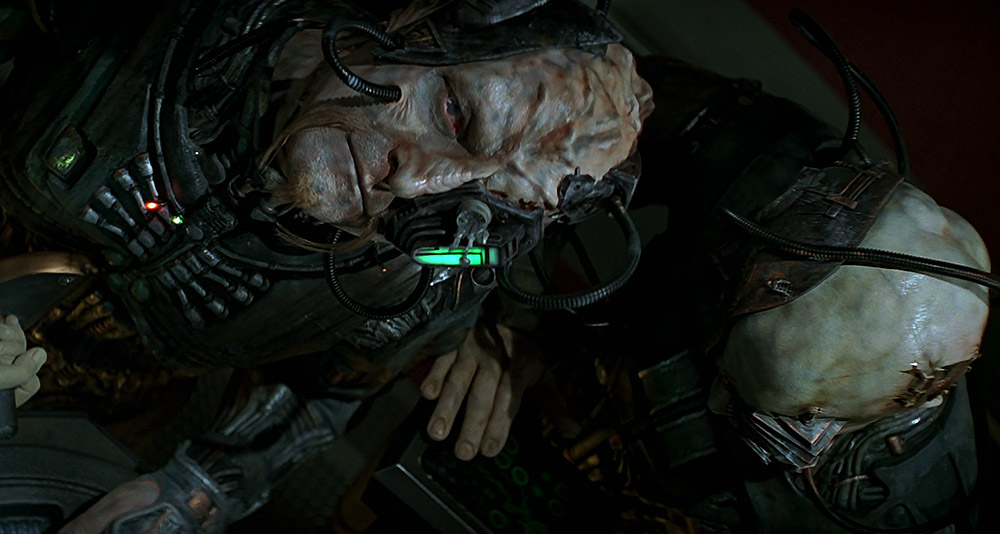 Star Trek: The Next Generation’s foray to the big screen began with Generations, but actor/director Jonathan Frakes decided to up the ante with First Contact, a sequel primarily focused on a climatic battle with the dreaded Borg. For the first time, this intractable foe was represented in all of its terrifying might, making the film a mixture of both sci-fi action and horror elements.

The pacing of the film was brisk thanks to the directorial style of “Two-Takes Frakes,” but not without considerable plot weight. The film leveraged comedic relief at just the right times, while allowing the dramatic elements and tension to carry the rest of the story. All in all, one of the best Star Trek big screen films of all time. 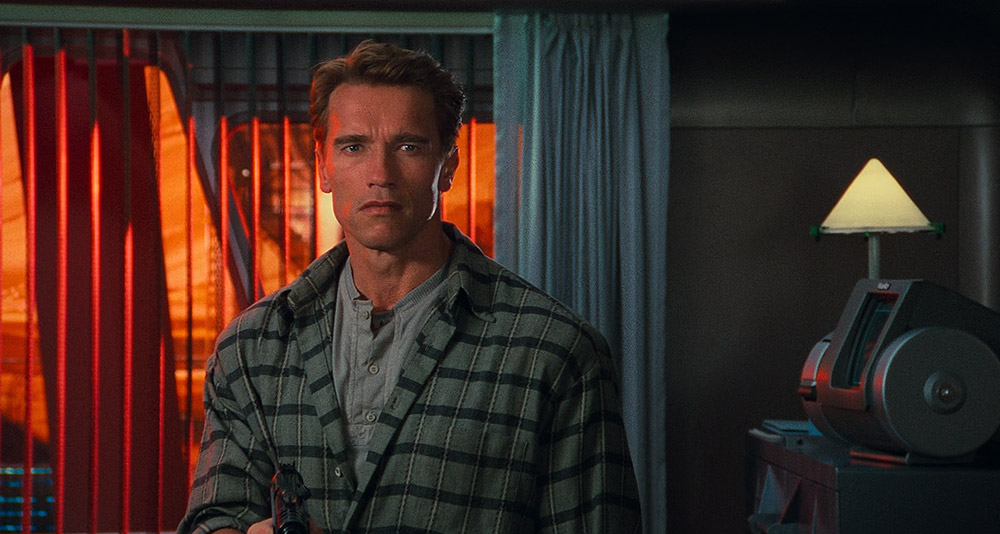 Paul Verhoeven had already made a name for himself with the ultra-violent action hit RoboCop, and he brought the exact same pacing, directorial style and tone to 1990’s Total Recall, a loose adaptation of Philip K. Dick’s We Can Remember It For You Wholesale. The plot revolves around Arnold Schwarzenegger’s character Douglas Quaid, a regular blue-collar worker with dreams of vacationing on Mars.

He gets his wish after a disastrous event at a memory implant company, where he soon discovers that he’s a double agent working for a nefarious Martian Governor. It’s non-stop action from start to finish as Quaid attempts to figure out who he really is, and whether his experiences are real, or just memories implanted in his own mind. 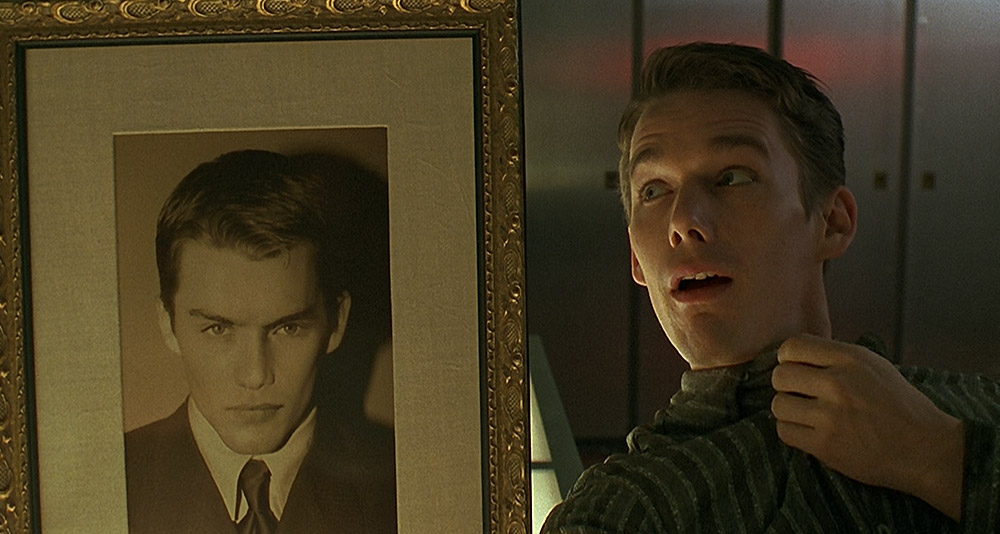 Gattaca offered sci-fi fans a completely different take on the genre; one that focused far more on character development as it pertained to future societal changes. The story focuses on Vincent (Ethan Hawke) as a janitor with dreams of going to space. Unfortunately, in this society, everyone’s future is predetermined to them by their genes.

Vincent tries to disprove that notion by gaming the system with the help of a genetic elite named Jerome (Jude Law), who was paralyzed in a car accident. The film mixes nail-biting tension via a cat and mouse chase, with much larger critiques directed at genetic manipulation and the ever-present threat of societal elitism. 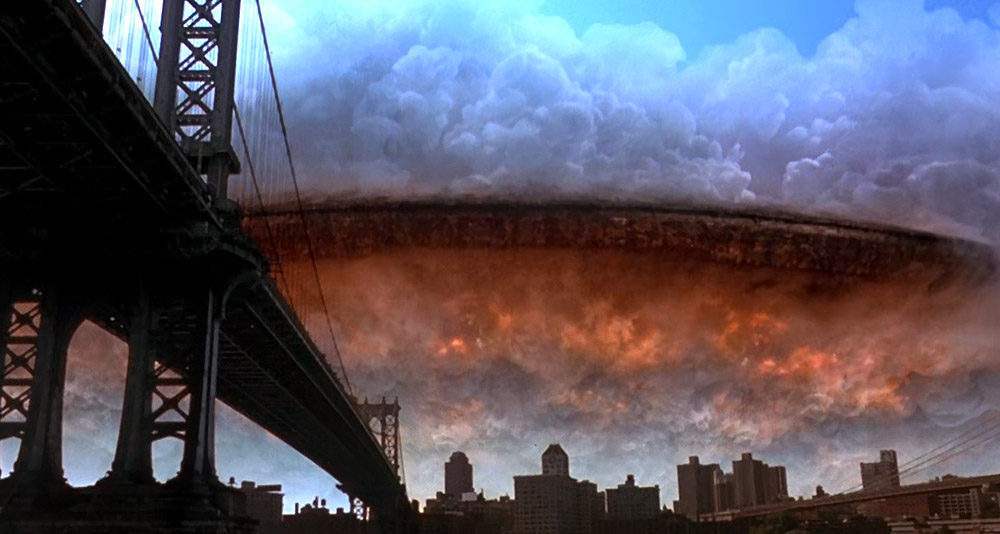 Sci-fi summer popcorn flicks don’t get much more shallow and direct than Independence Day, but it still remains a classic of the genre. It’s little more than an alien invasion movie, but director Roland Emmerich upped the bar by focusing on pivotal scenes and shots that had real, true impact for moviegoers at the time.

The movie focused largely on mass-devastation that decimated Earth’s cities, while the second half of the film focused on humanity’s counterstrike. The movie is capable of generating genuine terror, but it is kept in check with great comedic timing and a cast of loveable characters that made audiences cheer at the end of the final act. 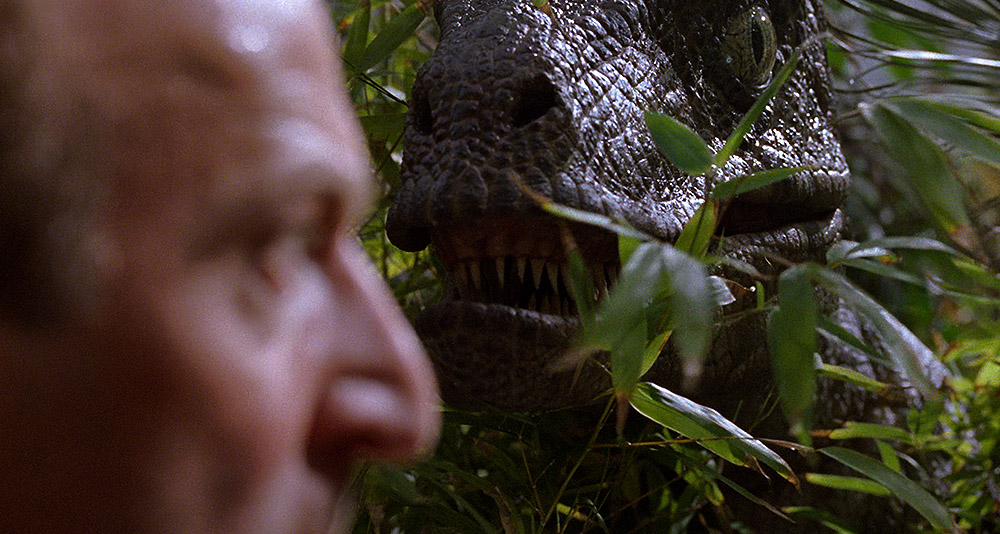 A velociraptor sneaks up on Muldoon in ‘Jurassic Park’ (1993), Universal Pictures

No other sci-fi film captured the hearts and minds of so many moviegoers across all age groups during the 1990s than Jurassic Park. Steven Spielberg masterfully adapted the original Michael Crichton source material for a PG-focused audience, while simultaneously upping the visual effects bar through a use of early CGI and traditional puppetry.

The result was near-perfection that single-handedly revitalized humanity’s fascination with dinosaurs for years to come. Jurassic Park was all about excitement, tension and terror as its snack-sized human characters evaded one dino attack after another in an attempt to escape. Every sequel since the original has suffered, but Jurassic Park faces no threat towards its iconic status. 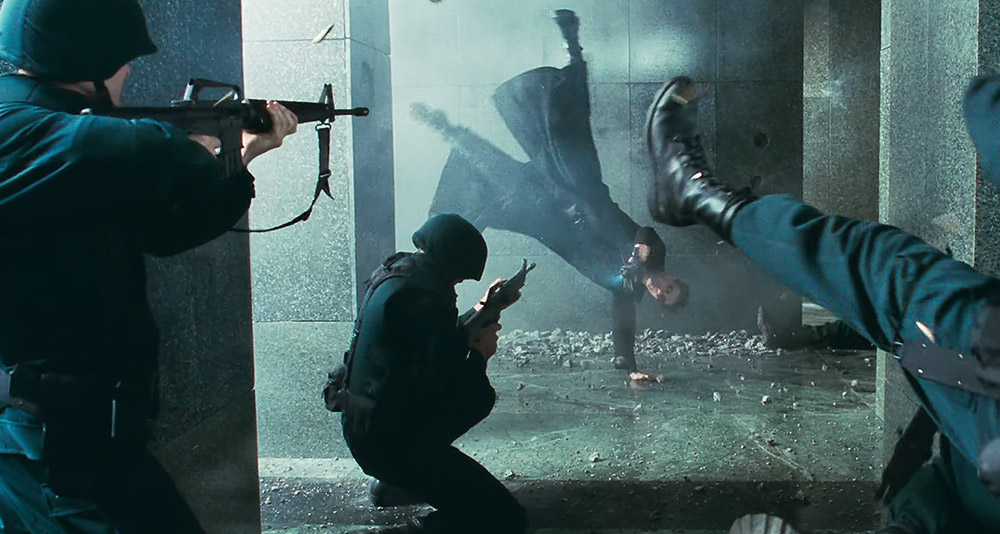 The Matrix was nothing short of a worldwide pop culture phenomenon that blended both science fiction action, classic kung fu films, and deep philosophical messages to produce a dynamite experience. Keanu Reeves shined as Neo, a regular guy thrown headfirst into his own destiny as humanity’s Moses-type liberator from a race of sentient machines.

The film broke a number of barriers both in visual effects and storytelling, while unchaining itself from the restrictions of reality. Its follow-up sequels may have gotten progressively worse over time, but the original Matrix continues to stand tall as one of sci-fi’s most inventive and successful attempts at breaking out of the mold. 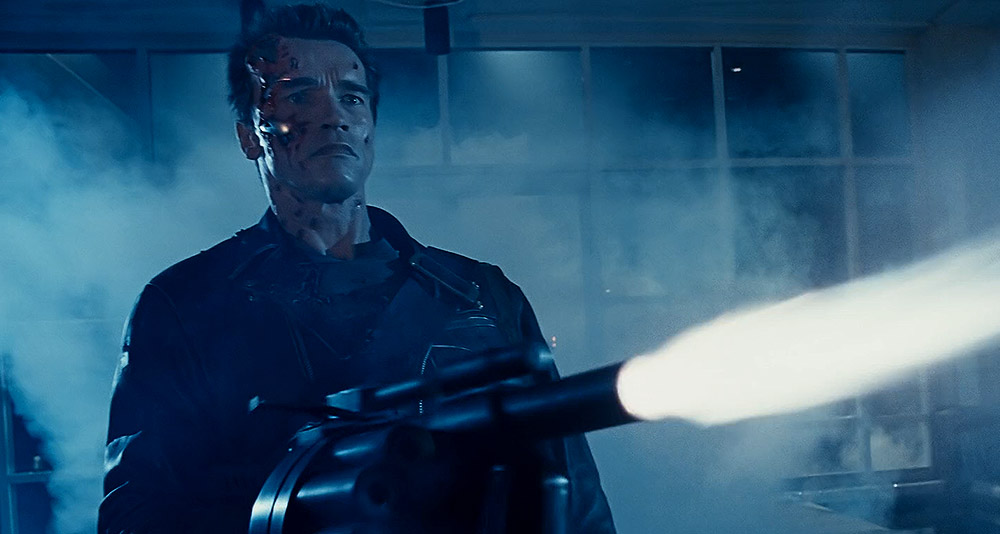 No other sci-fi film of the 90s was as iconic as James Cameron’s Terminator 2, a follow up to his seminal 1984 original. Arnold Schwarzenegger made a grand return to form, swapping homicidal tendencies for the role of a protector. The addition of Edward Furlong as a young John Connor, along with Linda Hamilton’s impeccably perfect performance as Sarah Connor meant instant chemistry for the cast.

Terminator 2 was, and continues to be, an indescribable thrill ride with some of the most daring and breathtaking action sequences ever committed to film. Those who haven’t seen it would be wise to pick up the Special Edition of the film, which fleshes out the narrative and offers meatier padding to an already healthy run time.