Anita Sarkeesian has once again sparked a wave of discourse after the notorious feminist media critic cried foul and played the victim after receiving pushback against a complaint she made against ‘boob armor’ in The Mandalorian. 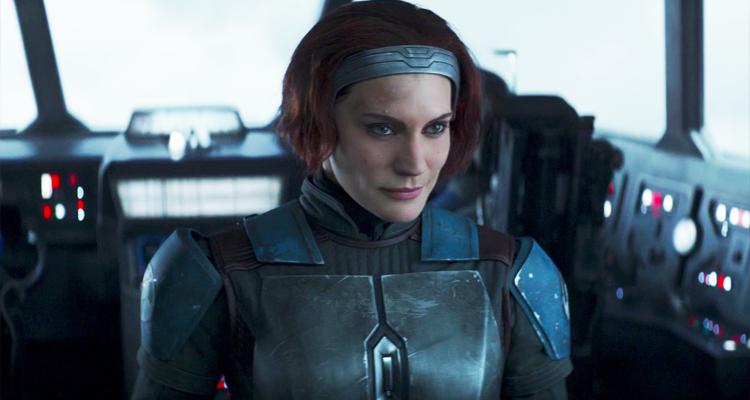 While this latest season of The Mandalorian has thus far shown numerous moments worthy of fan excitement, such as Din Djarin’s straight-out-of-Knights-of-The-Old-Republic Krayt Dragon hunt or Baby Yoda’s potentially genocidal eating habits, few events in the second season have enjoyed as big of a fan reaction as the return of fan-favorite Mandalorian, Bo-Katan Kryze.

Making her first appearance since the Star Wars Rebels episode Heroes of Mandalore, Bo-Katan appeared alongside newly introduced Mandalorians Koska Reeves and Axe Woves, clad in their unique Mandalorian armors and offering Din Djarin information on the Jedi in exchange for his assistance in raiding an Imperial vessel.

While most fans agreed that the appearance of the fully-armored Mandalorian trio was a highlight of the episode, Sarkeesian took issue with how Bo-Katan and Koska’s armors were designed to allow room for their chests. 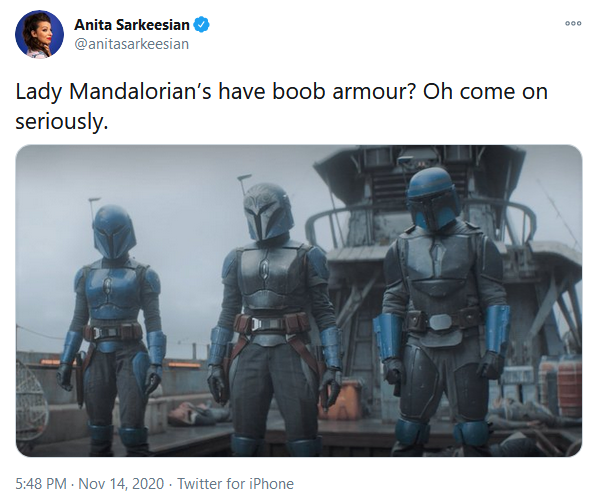 Unsurprisingly, Sarkeesian’s take received massive amounts of pushback, with many fans noting that the armor wasn’t boob armor, but rather just armor made specifically for the female body, and asserting that the critic seemed to just be looking for an issue to be upset with.

“Looking at the three, seeing has how he has similar plating that’s flat to his chest is telling that this CHEST armor is just made to contour to their chests,” observed @Super_Shanko.  “more so than made for sexual intent as the women there have protruding chests vs the man there.” 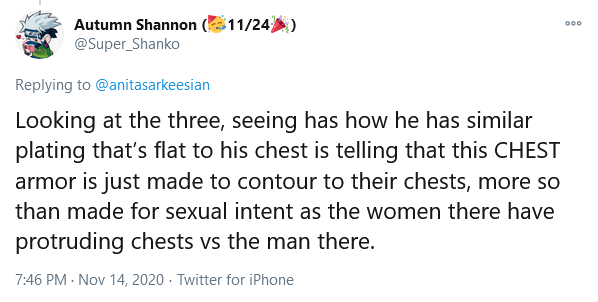 In response to one user who sarcastically replied to Anita “Yes, it’s terribly sexist to cater to women’s needs in combat armor”, author and US Army Iraq War combat veteran Ryan Leigh Dostie noted how in real life, the “real problem” for female soldier’s gear is, in fact, how “the sappy plates are flat and smash against our breasts and flatten them and it’s so uncomfortable.” 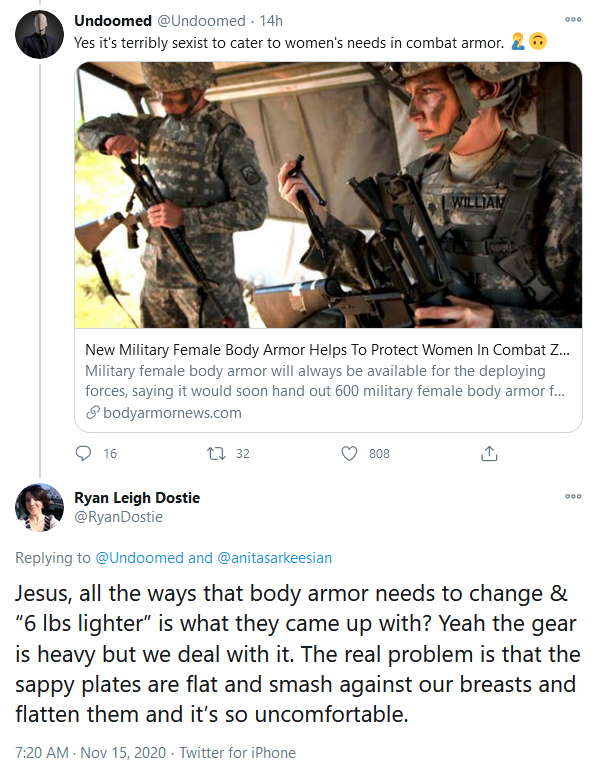 “It’s almost like 50% of the planet have these fleshy mounds on our chests that hurt if they are squished to hard!” asserted @RaptorGamma. “Not everything you see is mysonistic! [sic]” 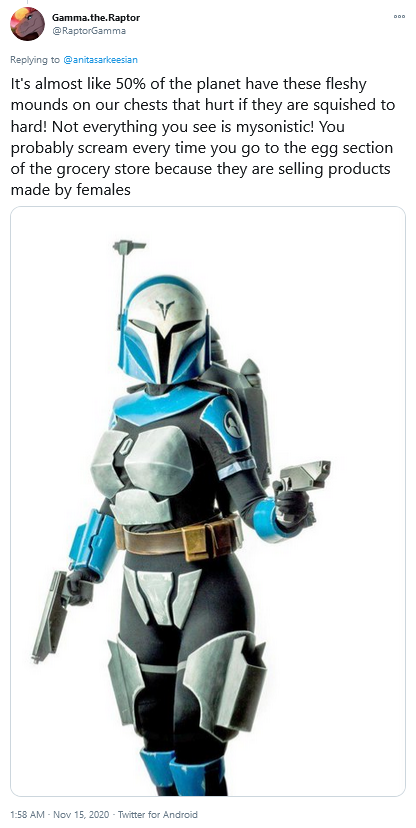 It should be noted that Bo-Katan has appeared in her chest-accommodating armor since her first appearance in the Star Wars: The Clone Wars series in 2012.

Considering Sarkeesian’s media critiques and her Feminist Frequency website rose to prominence in 2011, it seems that she only took notice of Bo-Katan’s appearance in The Mandalorian due to the show’s current popularity. 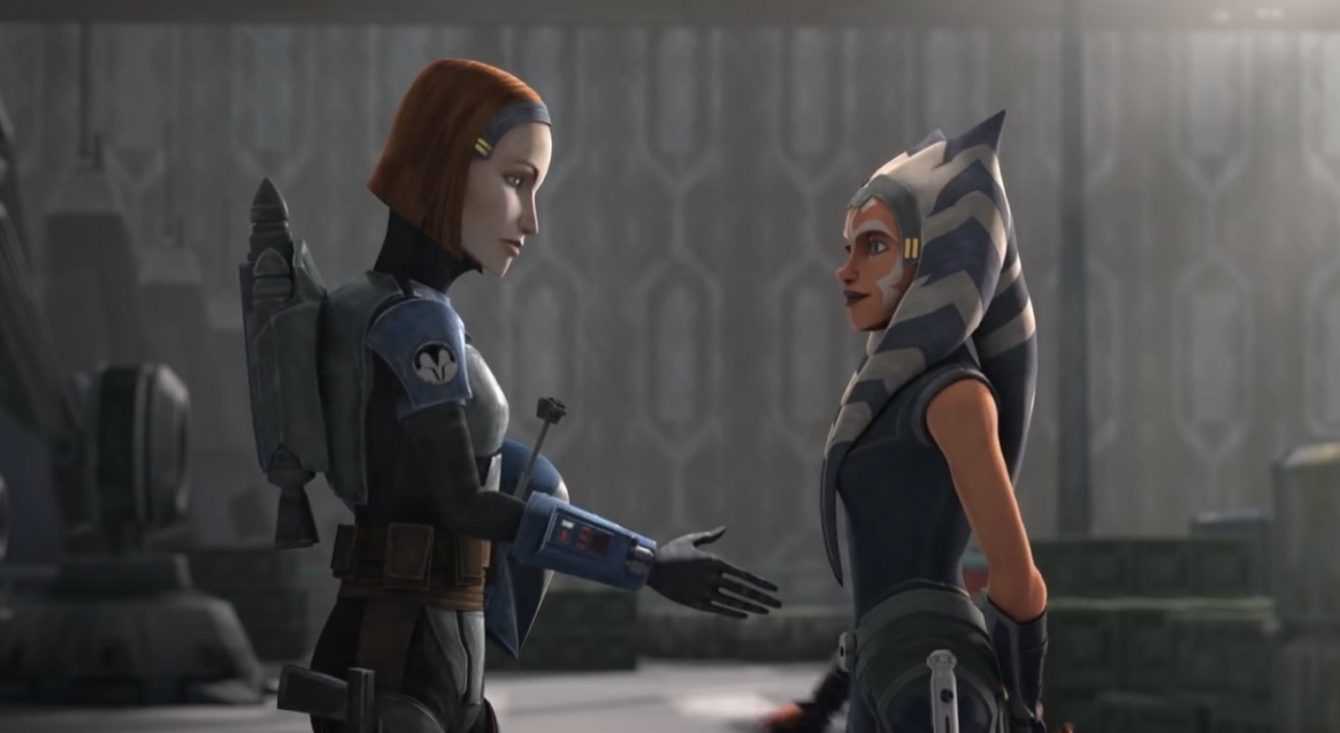 After receiving a massive ratio on her initial tweet, with over one-thousand replies compared to a little over fifty likes, Sarkeesian turned her sights on her detractors and quipped “But for real, we already did this”, providing a screenshot comparison of the engagement on her tweet with the similarly abysmal ratio seen on her last attack on The Mandalorian, in which she asked during the series’ premiere, “Am I extremely tired or is there not a single speaking character in the first episode of the #Mandelorian [sic]??”. 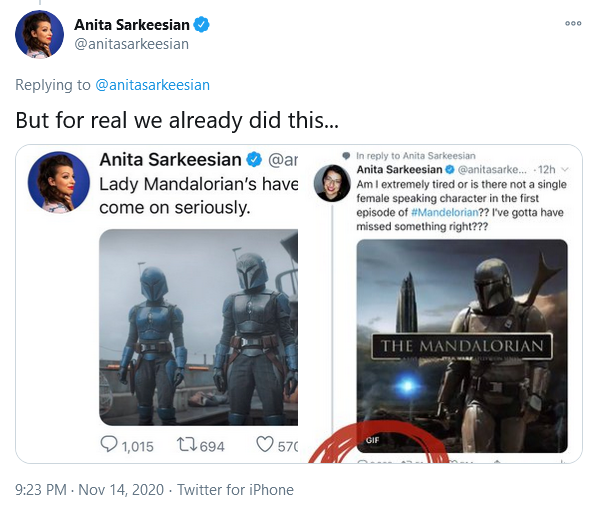 Sarkeesian would then launch into a tirade against those who disagreed with her armor-related complaint, strawmanning her critics as “grown ass children” who “throw these embarrassing temper tantrums when a woman has even the slightest critique on the mainstream, corporate media they feel ownership over.”

“They keep trying to gate keep THE MOST POPULAR FRANCHISE IN THE WORLD.” 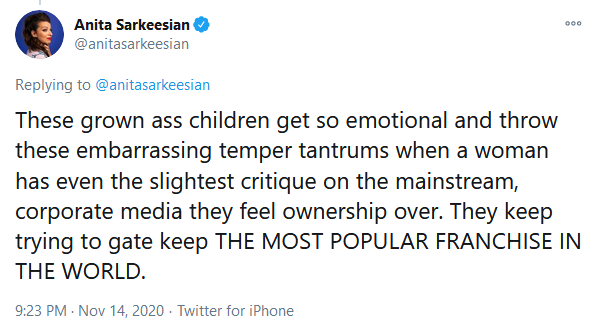 “Sorry to burst your bubble but the jig is up y’all,” she continued, claiming that “Star Wars isn’t some niche exclusive tree club where you hang up a “No Girls Allowed” sign and dictate the terms of the discourse. It never was and that is not changing any time soon,” despite literally no one criticizing for her gender and criticism being focused exclusively on her bad faith complaint. 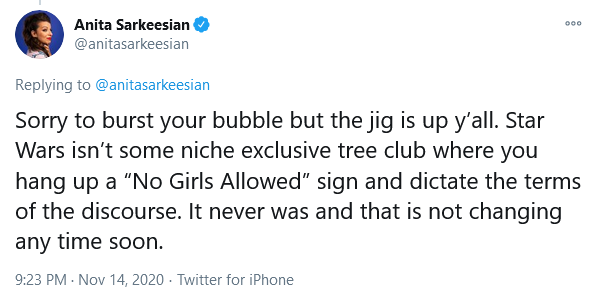 Unfortunately for Sarkeesian, audiences across Twitter, particularly women, once again disagreed with her arguments.

“I actually like a lot of your criticisms and think you have important points,” wrote @thestorygiver. “but when women are pointing out that they have worn stage or reenactment armor with a chest allotment for comfort and you ignore that it feels sort of scummy :c” 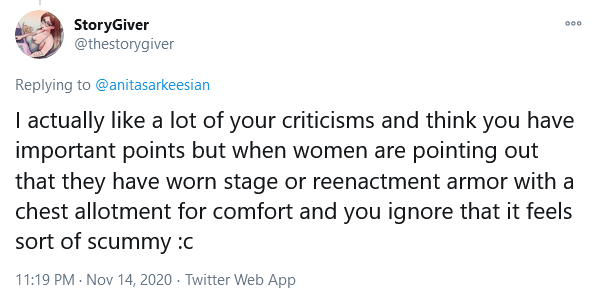 “Star Wars has always been inclusive,” said Belet-Seri. “It’s people like you , notorious agitators, who try to antagonise and demonize fans that are the problem.” 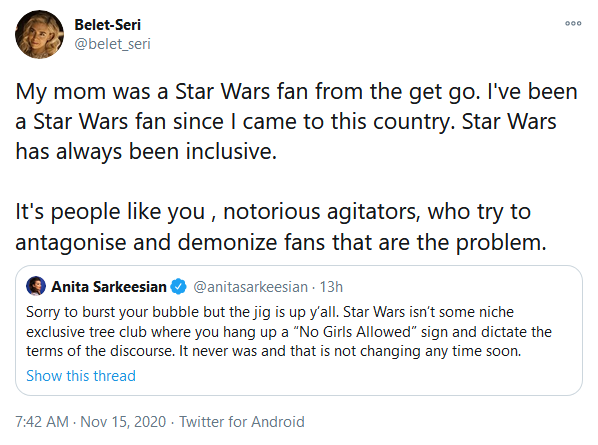 “Girl this is so embarrassing,” declared @teethlikearms. “this is the kinda shit that takes the credibility from feminist discourse.”

She then described how, “Mandolorians don’t have “booby armour” they have moulded chest plates to protect their bodies, bodies which have boobs there,” before concluding by calling Sarkeesian a”f—in weirdo”. 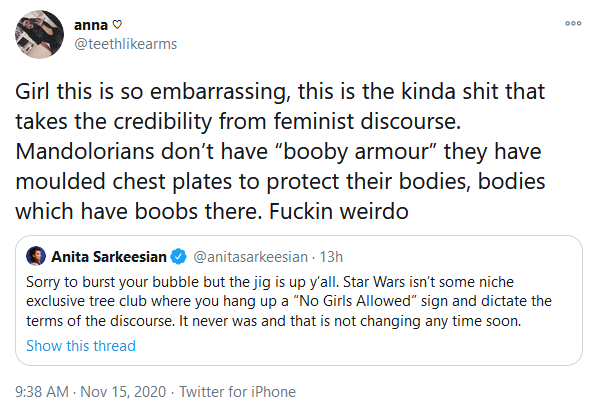 What is your take on Anita’s take? Are the Mandalorian boob armors sexist or practical? Let us know your thoughts on social media or in the comments down below!