Booksmart movie director Olivia Wilde has recently been targeted by social justice warriors, who have taken to social media to cry over an analogy that the actor and director made that has seemingly hurt their feelings.

If you are unfamiliar with Wilde, she started her career as an actor — starring in such films like Cowboys & Aliens and TRON: Legacy — and in 2019 made her debut as a director with the coming-of-age teen comedy Booksmart.

More recently, Wilde has been tapped to direct a Spider-Woman film. 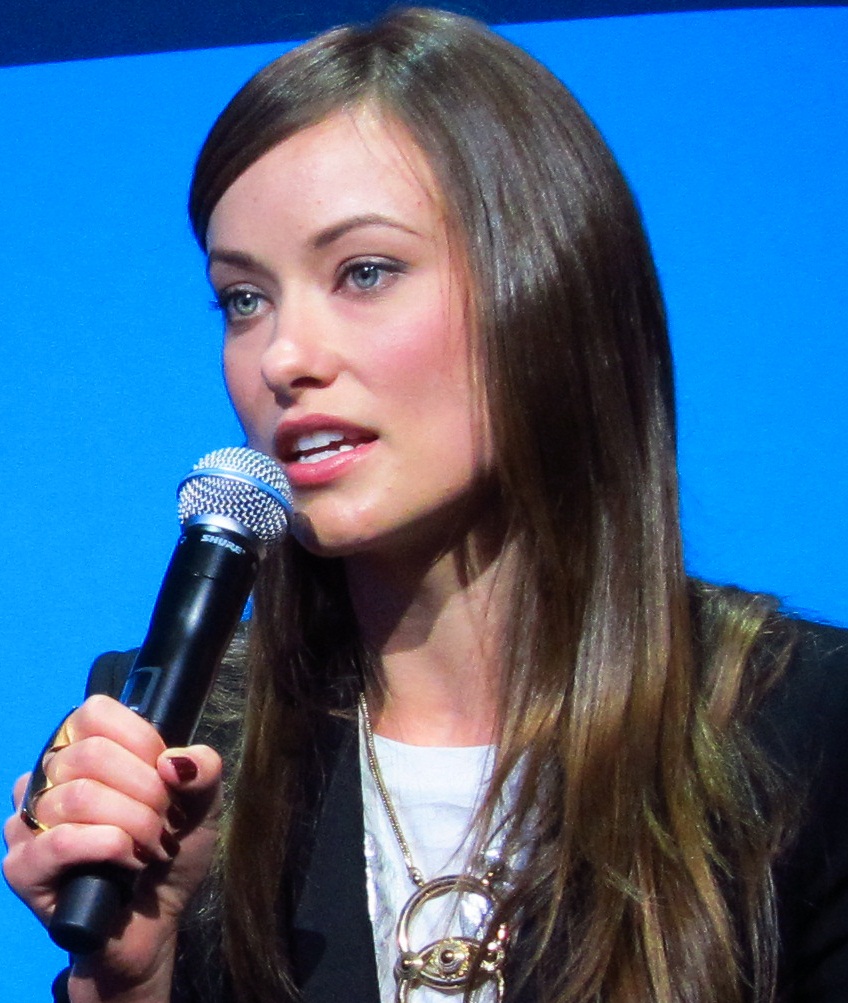 In an interview on Off Camera with Sam Jones published in June 2019, the actor compared changing careers to coming out of the closet, and SJW snowflakes have been throwing a tantrum since.

“I almost feel like someone who’s come out of the closet,” Olivia Wilde told Jones.

She continued, “Like, there’s this feeling of, like, honesty about what I really want to do and what I feel my role is.”

“It’s a level of comfort I haven’t felt in a long time… of, sort of, being true to myself,” Wilde explained when talking about her experience switching from actor to director.

You can listen to the full episode down below, but that specific part that has social justice warriors triggered can be found at the 13:02 minute mark.

A post shared on Twitter by user @LSupdated wasted no time throwing a tantrum about Olivia Wilde comparing her career shift to coming out of the closet — going as far as saying that they are “beyond disgusted.”

“Olivia Wilde. I am beyond disgusted,” reads the comment by @LSupdated.

It continues, “How dare you invalidate the LGBTQIA+ community like that. Comparing a change in jobs to coming out of the closet, how insensitive could you be?” 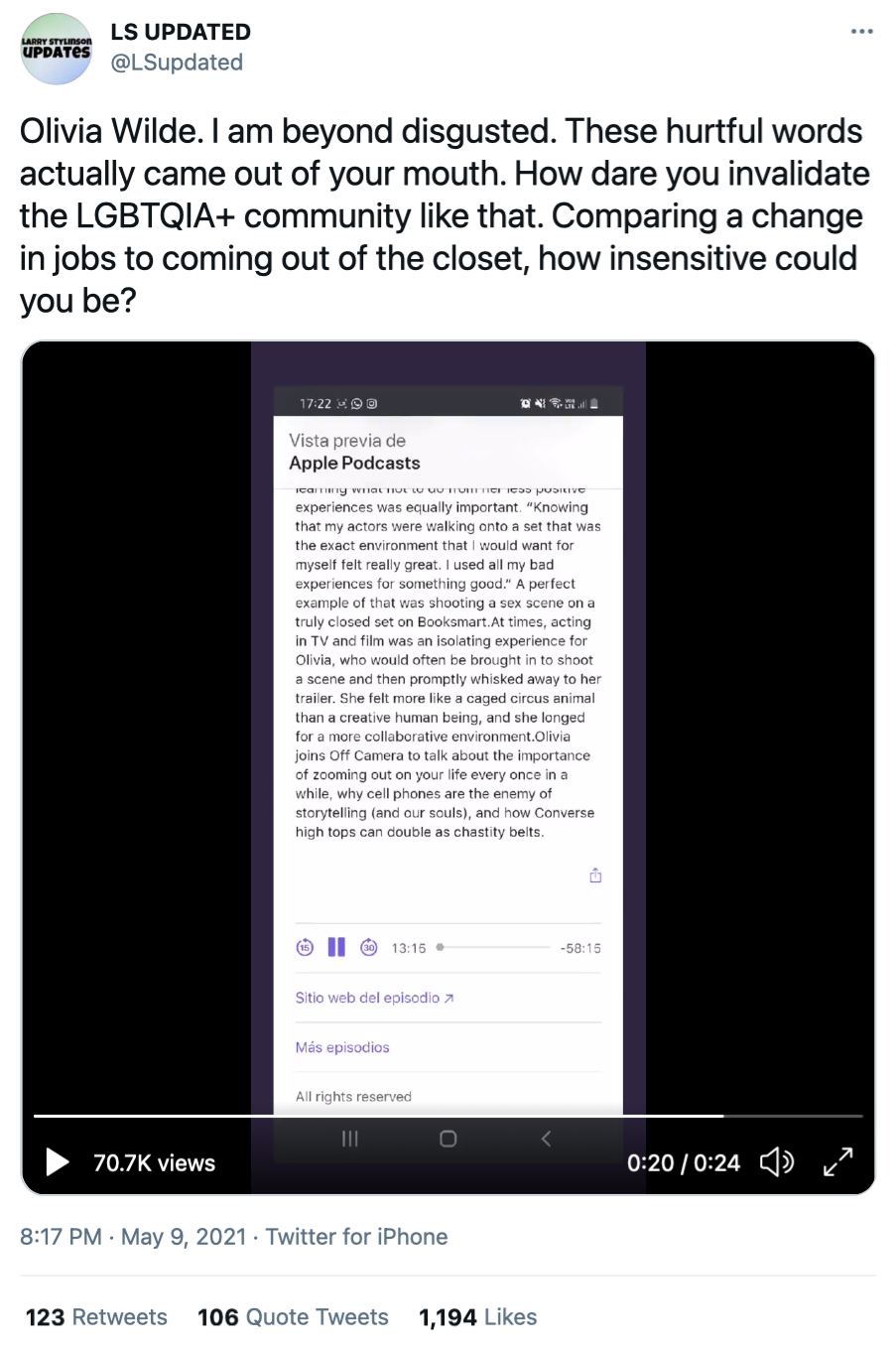 The user was also the one who shared the 24-second clip in which Wilde can be heard making the “controversial” comparison. However, the user wasn’t done just yet, adding that, “Any respect i actually had for you Olivia Wilde is gone.”

“This is the same woman who tried to shame NewYorkers for not giving up their train seat to her rich pregnant as&,” adds Twitter user @ancor288, who then goes on to explain, “not knowing if people were just tired from 12-14 hour shifts or dealing with their own health issues.”

Finally, the user added that “she could afford a chauffer…” and proceeded to share an animated gif in order to let everyone know that they don’t like Olivia Wilde. 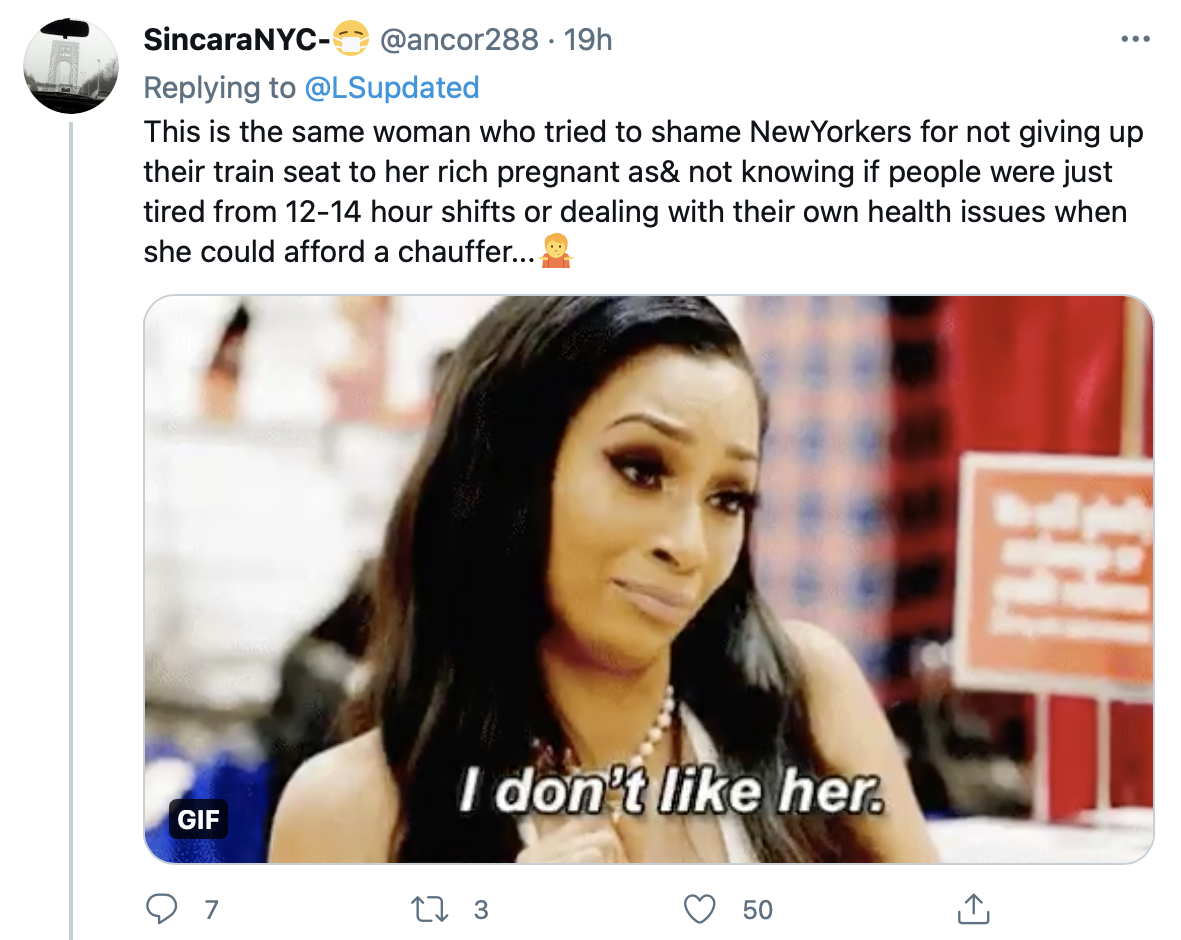 Common sense can also be found on @LSupdated’s thread. Take YouTuber Merry Mayhem, for example, she was not on board with the cancellation of Olivia Wilde, and explained how this makes them look bad.

“omg can the overly sensitive gay folks please sit down and stop making the rest of us look bad please?” the user expressed.

She added, “It’s bad to force everyone to walk on freaking eggshells around us.”

She concluded writing, “It was a bad comparison, that’s all.”

“I’m gay and I still don’t get how this is offensive in anyway,” states Twitter user @_MuchNinja_.

These are only some of the top comments on the initial tweet by Twitter user @LSupdated, but some other threads attempting to cancel Olivia Wilde can be found on the social media platform’s feed.

Here’s one example by user @fallinggexhalee, who states, “the fact that olivia wilde compared coming out to changing her f***ing profession is honestly so s***** and messed up, it makes me sick.”

“i’m not out yet bc i’m honestly scared to come out & it makes me scared every day,” the user continued, adding that, “this makes me feel sick, f*** olivia tbh.”

As made obvious by some of these tweets, social justice warriors are clearly, and tightly holding on to that moral high ground.

Twitter user @magicallylwt, for instance, lets us all know that Olivia Wilde isn’t being cancelled because of who she is or isn’t dating, mind you, but because of the way she expressed herself about changing careers.

“no one is cancelling olivia wilde because shes ‘dating’ harry[Styles] so lets stop those comments before they even start,” adds this Twitter user, making sure that people don’t cancel Olivia Wilde for the wrong reasons.

The user continues, “shes being ‘cancelled’ because shes invalidating the lgbtq+ community, NEXT.”

Olivia Wilde has not made any comments in regards to the cancel culture mob targeting her for something she said back in 2019.

With that being said, chances are that she will be addressing the “controversy” rather sooner than later, especially since she has been on the woke side of Hollywood for some time now.

In October of 2016, Wilde shared and article published by The New York Times’ Nicholas Kristof titled “When Whites Just Don’t Get It,” with the caption “If we’re so concerned with ‘personal responsibility,’ shouldn’t we show some?” 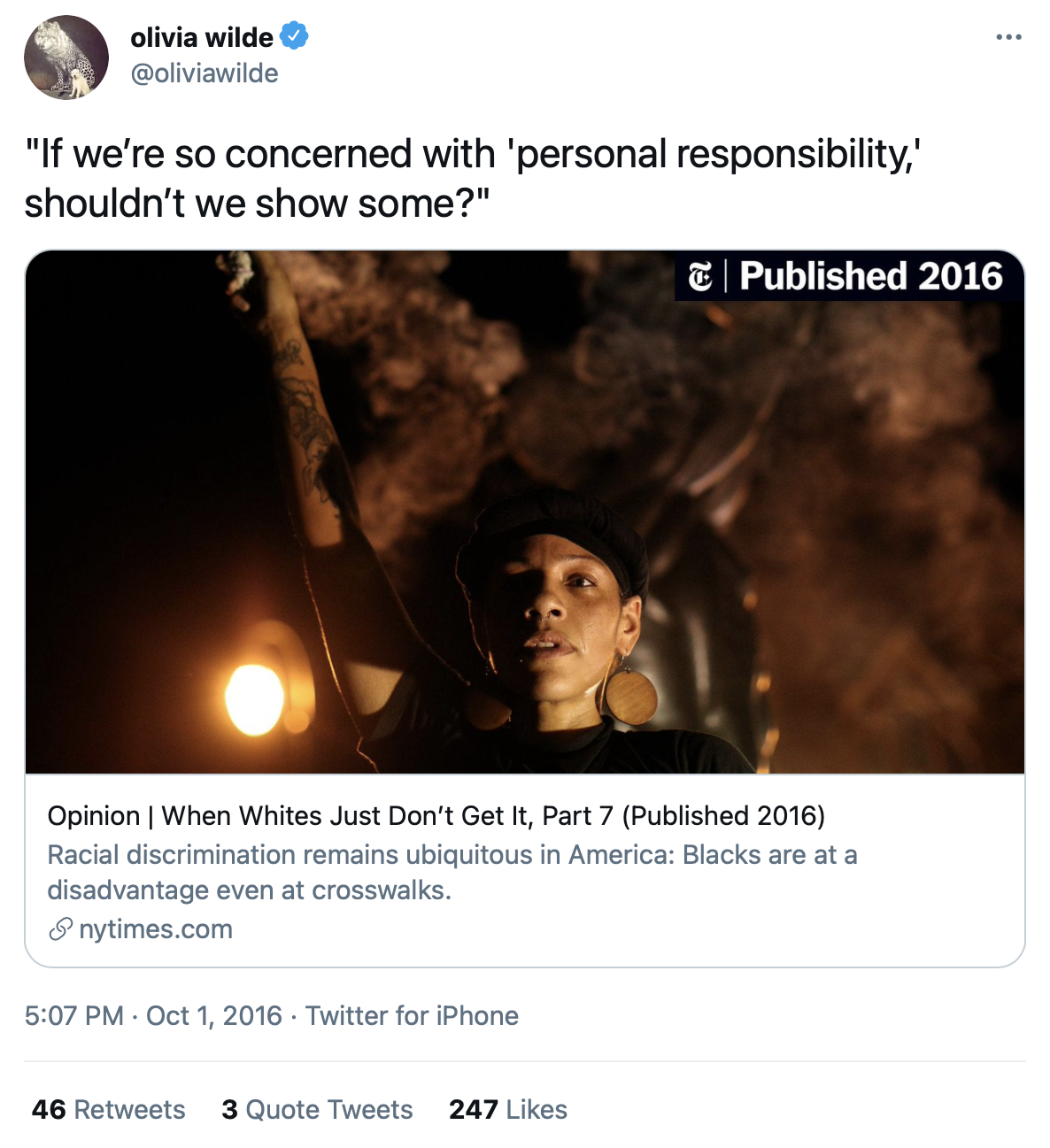 The former actor has also taken to Twitter to express her opinion on Delta airlines censoring an explicit sex scene in her movie Booksmart, and also condemning the company for censoring the word “lesbian,” stating that said decision “is just batshit insane.” 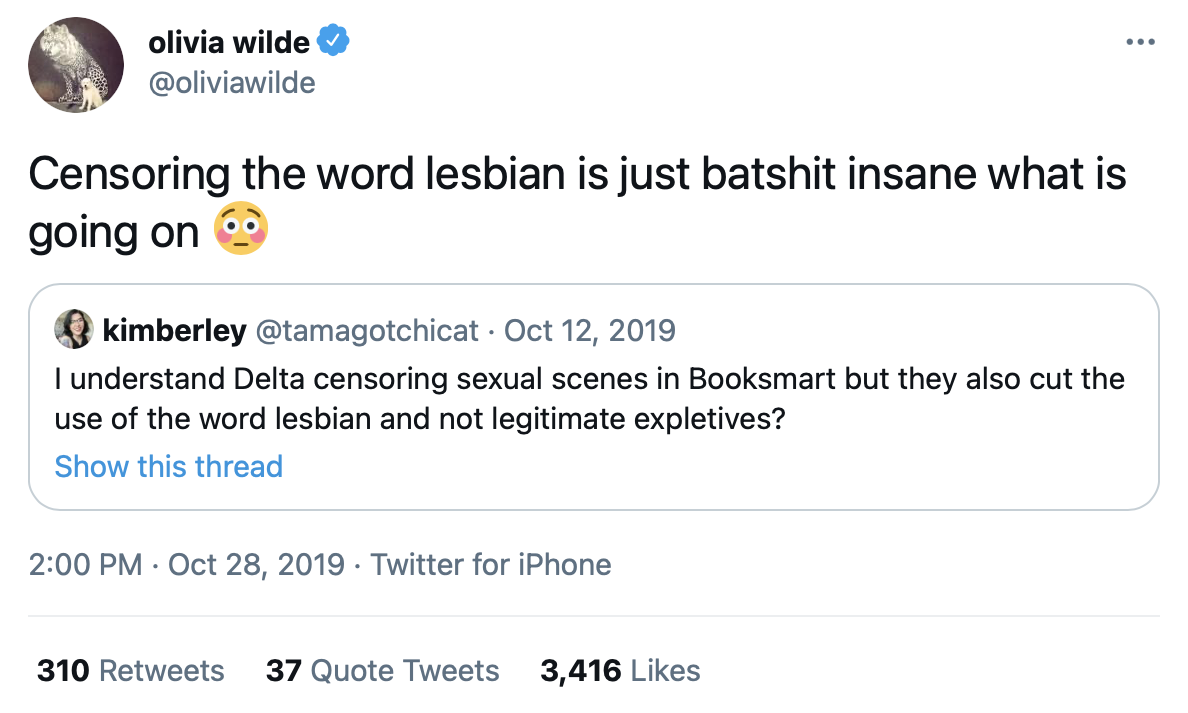 Olivia Wilde being targeted by the cancel culture mob is further proof that social justice warriors just love to eat their own; all it takes is one single misstep.

Not to mention the interview is from 2019, which means that snowflakes are actively trying to cancel people for what they’ve done or said in the past.

What do you make of the backlash Olivia Wilde has been getting lately? Let us know in the comments section down below or on social media.