Actor and comedian Bill Murray, best known for his involvement in the Ghostbusters franchise and his many roles on Saturday Night Live, has recently shared his experience during the COVID-19 pandemic, claiming that this is “the most challenging time” of our lives.

In an interview with The Independent’s Kevin E G Perry, Murray recalled the making of his most recent concert film, New Worlds: The Cradle of Civilization, originally filmed in 2018, noting that it is a time capsule in a world still dealing with the pandemic.

“It is a time capsule,” said Murray acknowledging Perry’s comment about the film, which actually opens with the actor clambering over the heads of the audience, before pointing out, “You just made me take a deep gasp of a breath.”

The Ghostbusters actor then went on to assert that there is nothing like a global pandemic, explaining why he believes the COVID-19 pandemic can’t be compared to anything we, as individuals, have experienced in our lifetime. 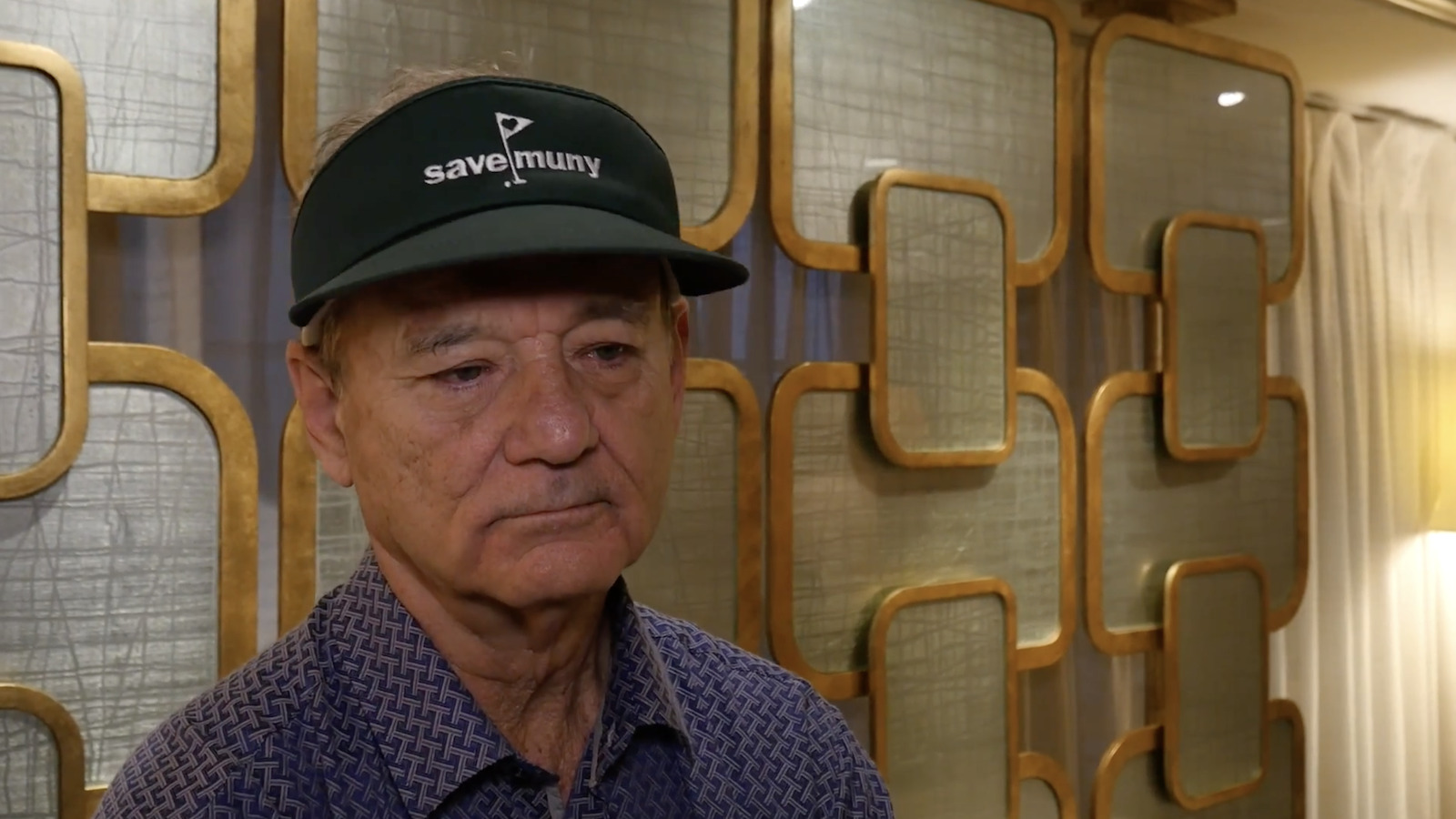 “We just went out with our friend to walk the dog, and you’re wearing a mask, everyone’s wearing a mask. The dog is the only one who’s completely alive! He’s living the dog’s life,” Murray explained.

He elaborated, “The rest of us are afraid to die, and afraid to kill, so we’re masked up and we’re injected, and so forth,” adding, “It’s the most challenging time of this life cycle for us.”

“We didn’t have a world war or a depression, the things our ancestors had,” Murray assessed, before concluding, “This is the hand we got dealt and if you fold, you can’t win.”” 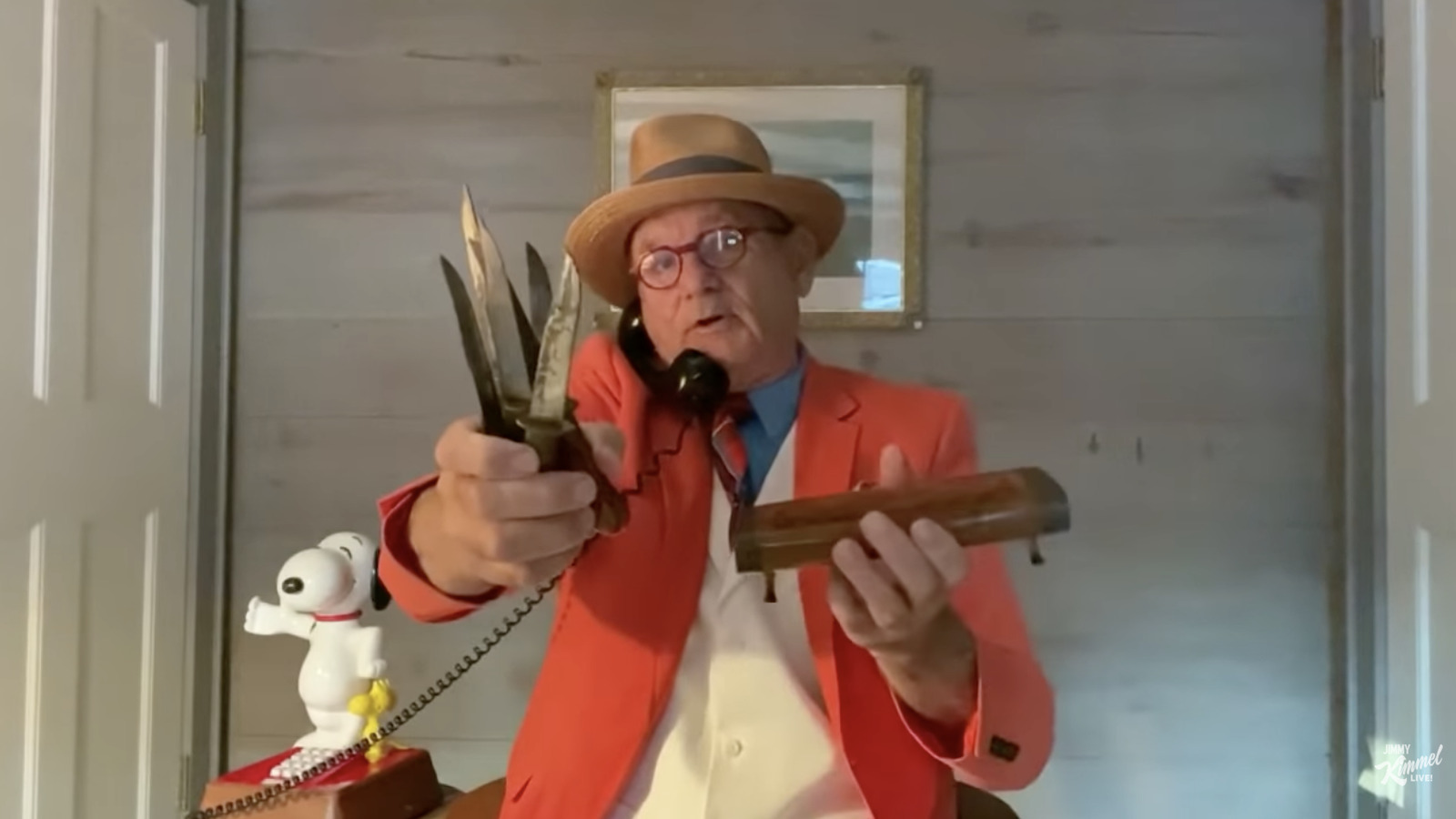 Bill Murray’s recent interview has actually caused quite the stir on social media, more particularly on Twitter, with some users taking issue with the actor’s comments on the COVID-19 pandemic.

“no bill, we’re afraid of going bankrupt because the cost of medicine is out of control,” wrote @Eisplan in response to the actor’s comments.

The user continued, “long covid is also pretty serious. bill could get covid and long covid and never worry about how he’s going to eat. that’s not how it is for most americans.” 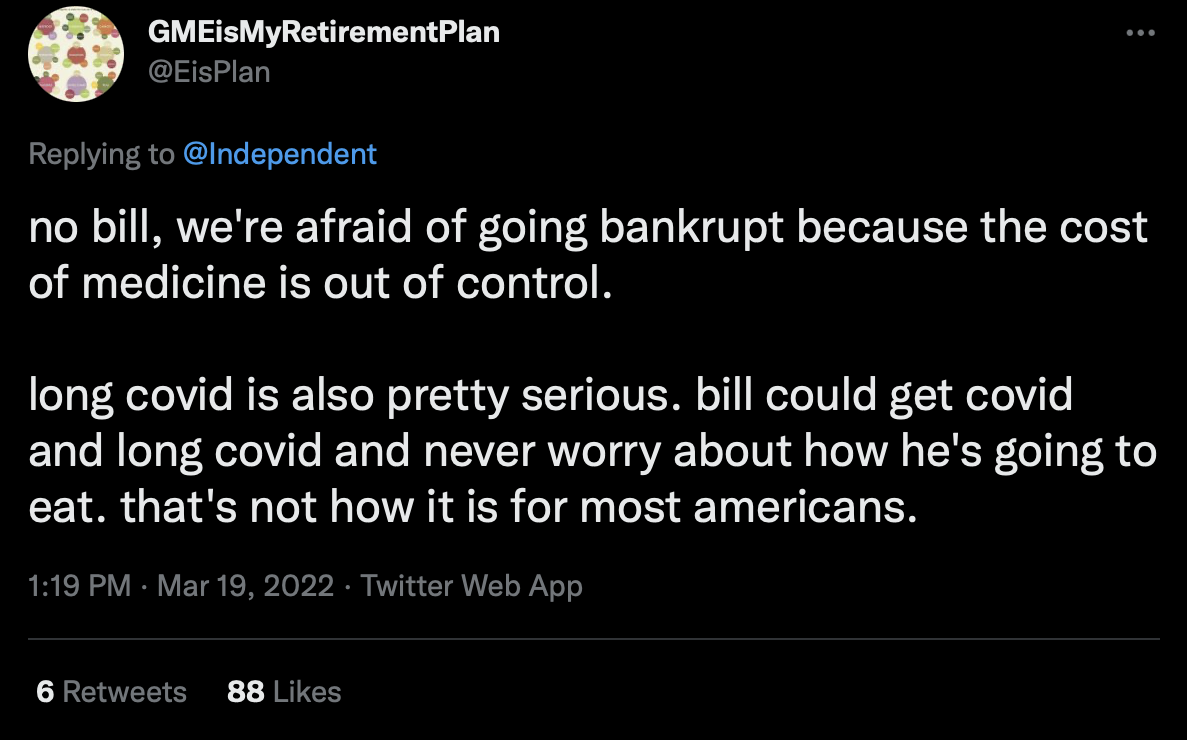 RELATED: Bill Maher Gets Social Media Backlash For Expressing His Opinion On COVID-19 Mask Mandates: “I Don’t Want To Live In Your Masked, Paranoid World Anymore”

“Um so maybe we re alive BECAUSE we wore a mask,” asserted another user.

“Bill Murray has enough history that I get why one may not like him. I know he’s always been an ass, never argued that. I liked some work enough to, idk ignore the person & enjoy the performance,” declared @Frogula.

They went on, “We all do somewhere But damn right I’m afraid to die. I know what covid can do. A—” 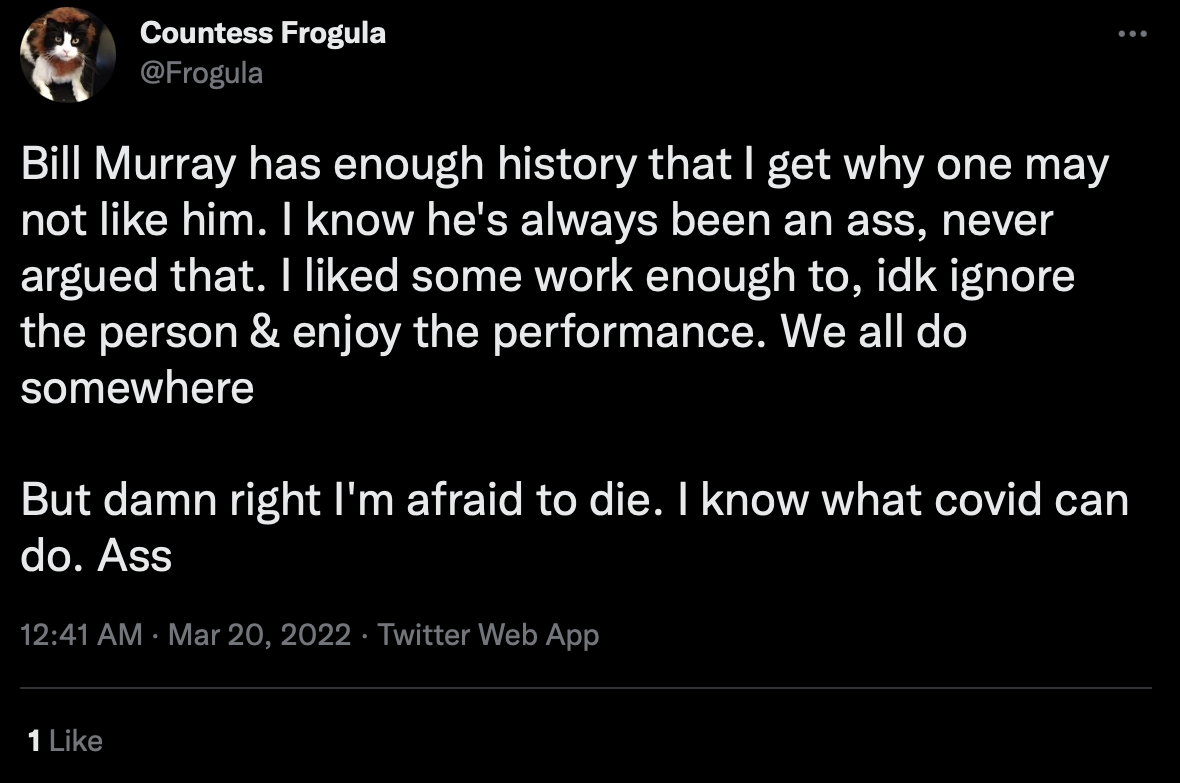 @Tiffany54656986 wrote, “Waiting to have a memorial service for my 25 year old niece who died of Covid because she was afraid of the vaccine. Crematorium is backed up a MONTH due to all of the DEATHS. My cousin OWNS the mortuary. Still can’t get it done sooner. But please tell us about DEATH Bill Murray.” 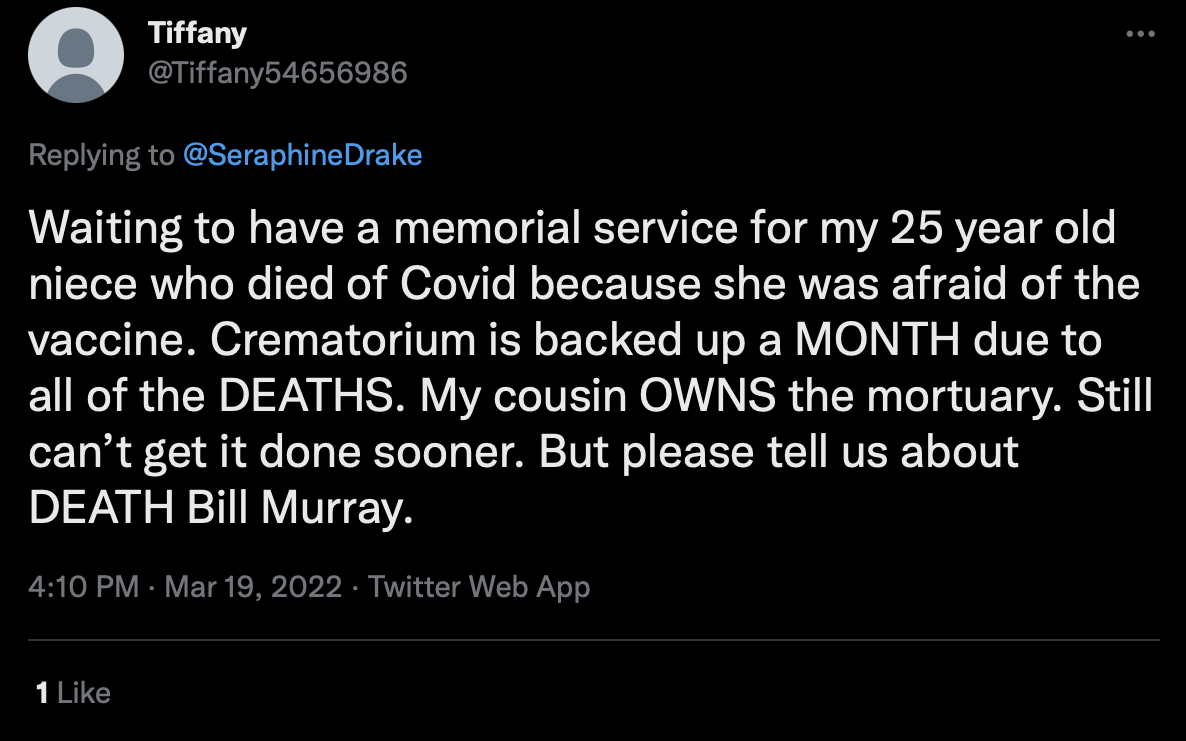 “BILL MURRAY IT’S TO SOON, SO SHUTUP BECAUSE PEOPLE HAVE LOST THEIR LOVE ONES!” write yet another disgruntled user.

He further added, “MAN 6.08M HAVE ALREADY DIED FROM THE COVID-19 VIRUS, AND HONG KONG & CHINA ARE ON SHUTDOWN AGAIN!! ITS A SORRY OLD NON JOKES COMING FROM A WRINKLE OLD MAN!” including the #Wearadamnmask hashtag twice. 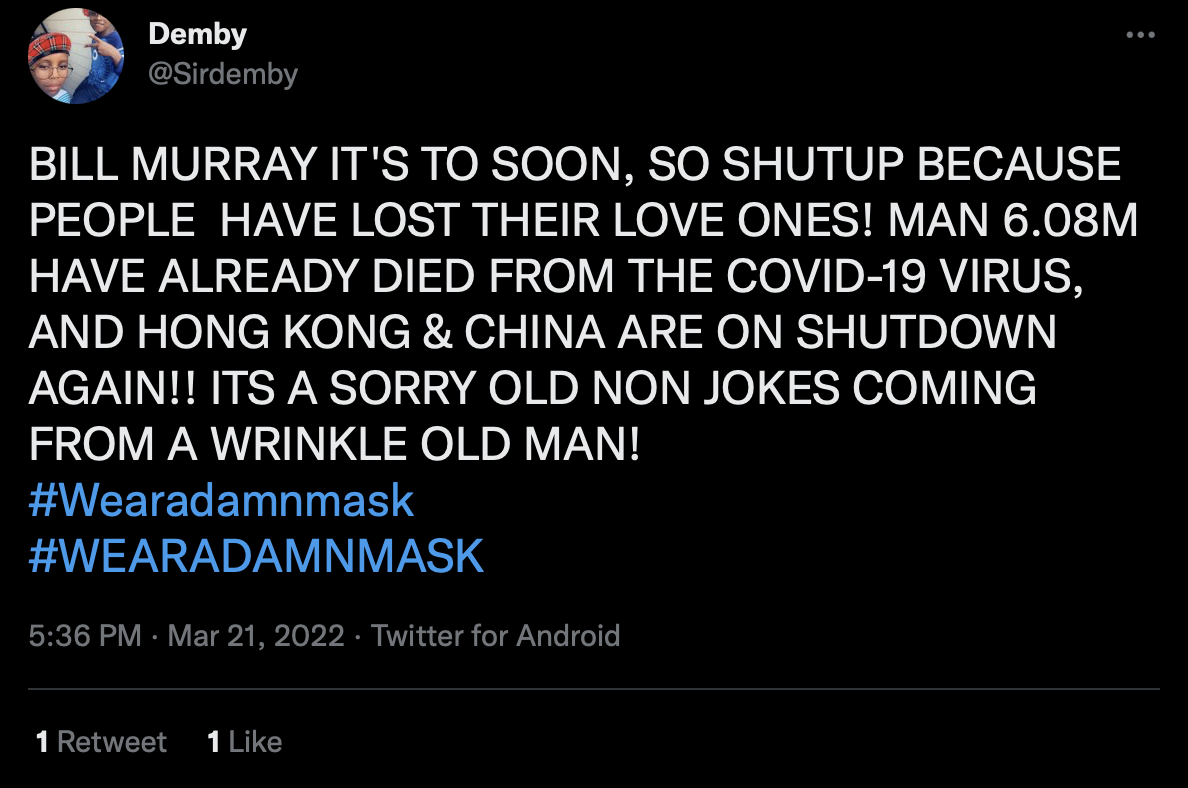 While Murray was getting some backlash for his comments on his experience wearing a facial mask during the pandemic, other users simply decided to fixate on The Independent’s headline, which simply quoted the actor saying, “We are afraid to die and afraid to kill.” 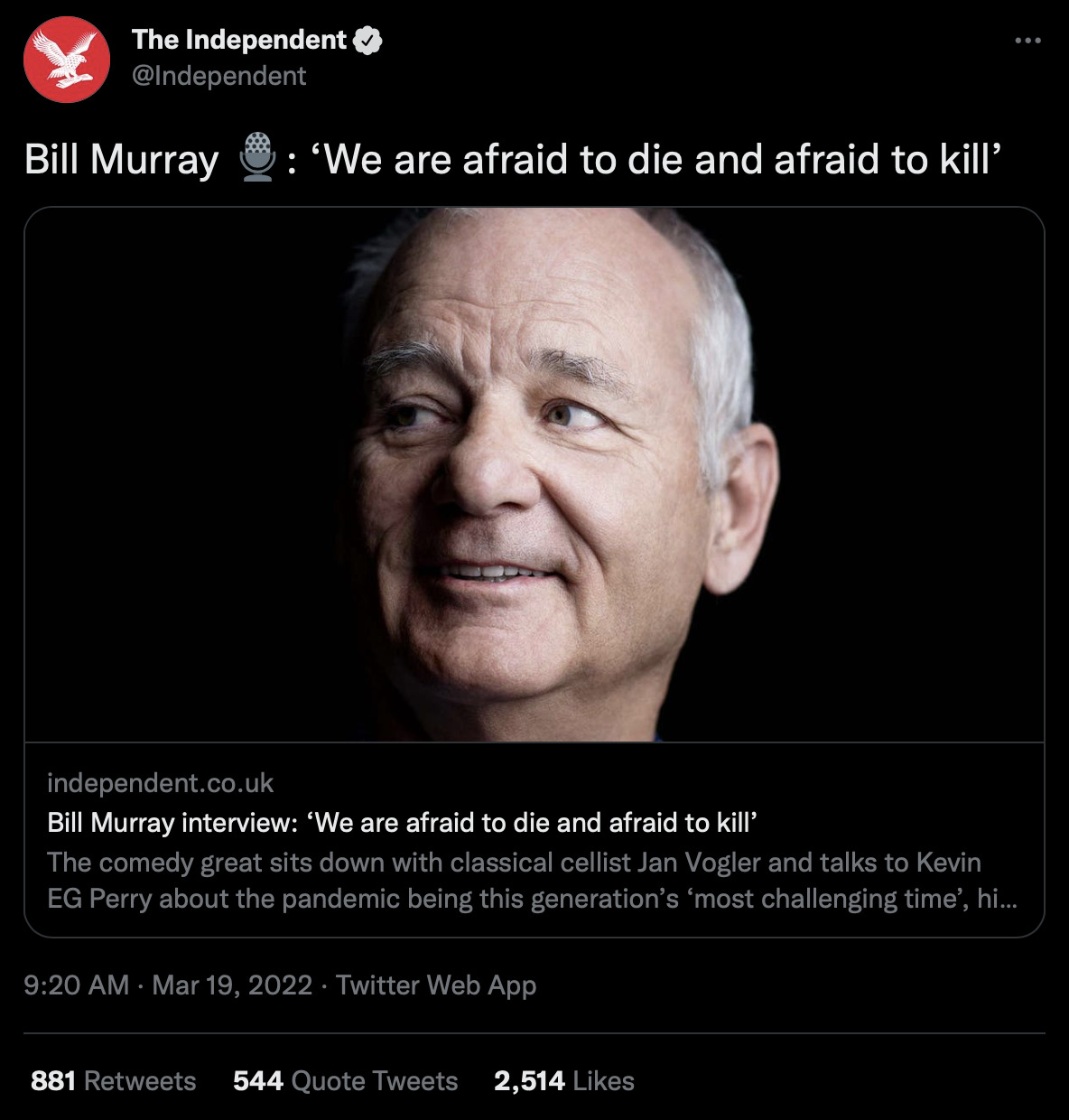 It is worth mentioning that some users noted that The Independent’s interview with Bill Murray was locked behind a paywall, so they couldn’t have access to the full article. This did not prevent them, however, from making a reactionary comment denouncing the actor for something he never said.

“Death is kinda permanent Bill, so yeah” wrote @Hea1y, seemingly alluding to the quote of Bill Murray shared by the publication’s post on Twitter.

“Bill M can suck my dic[sic] for all I care,” read the comment of a reactionary user. 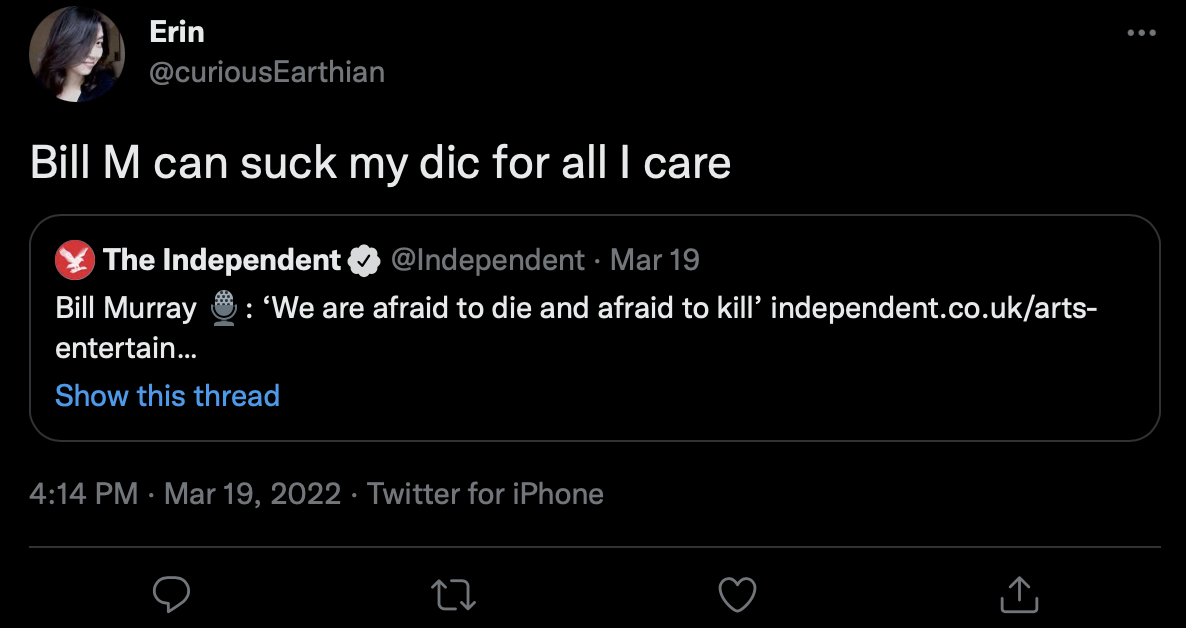 “I mean, yes? We are? Those are reasonable things to be afraid of? What am I missing,” wrote @la_guettler, who evidently missed the context provided in Bill Murray’s full interview. 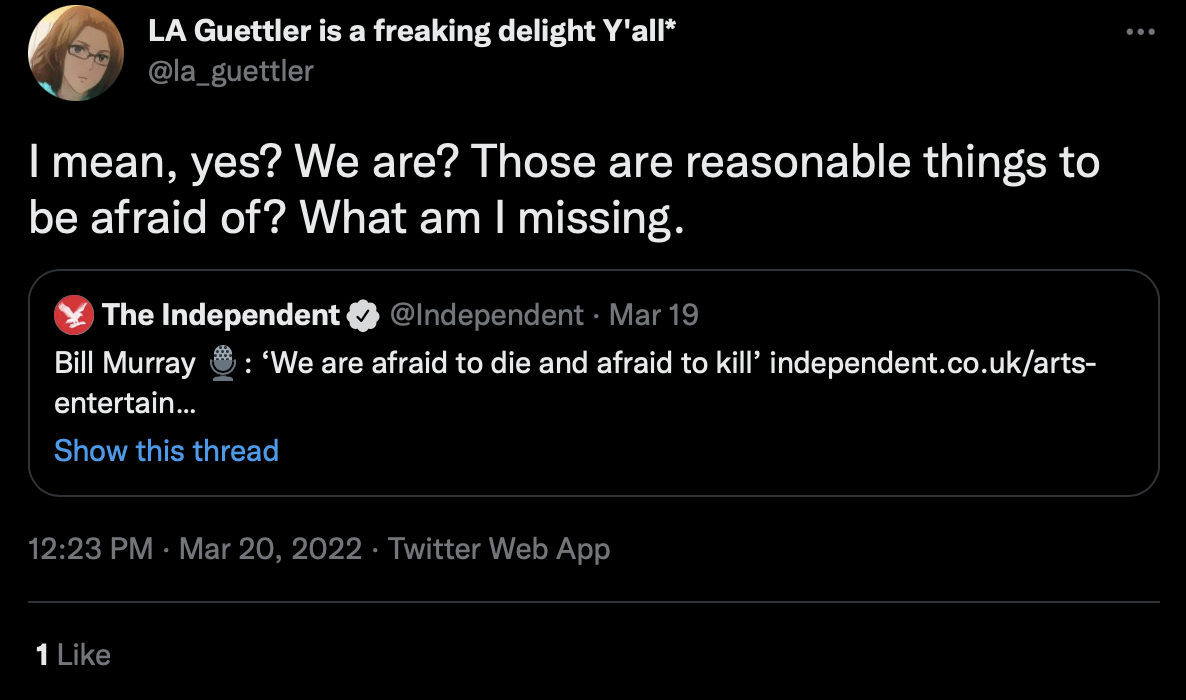 @peasty01 accused Murray of being an “entitled moron,” claiming that the actor is “wishing death on others from his arrogantly privileged position and lifestyle.” 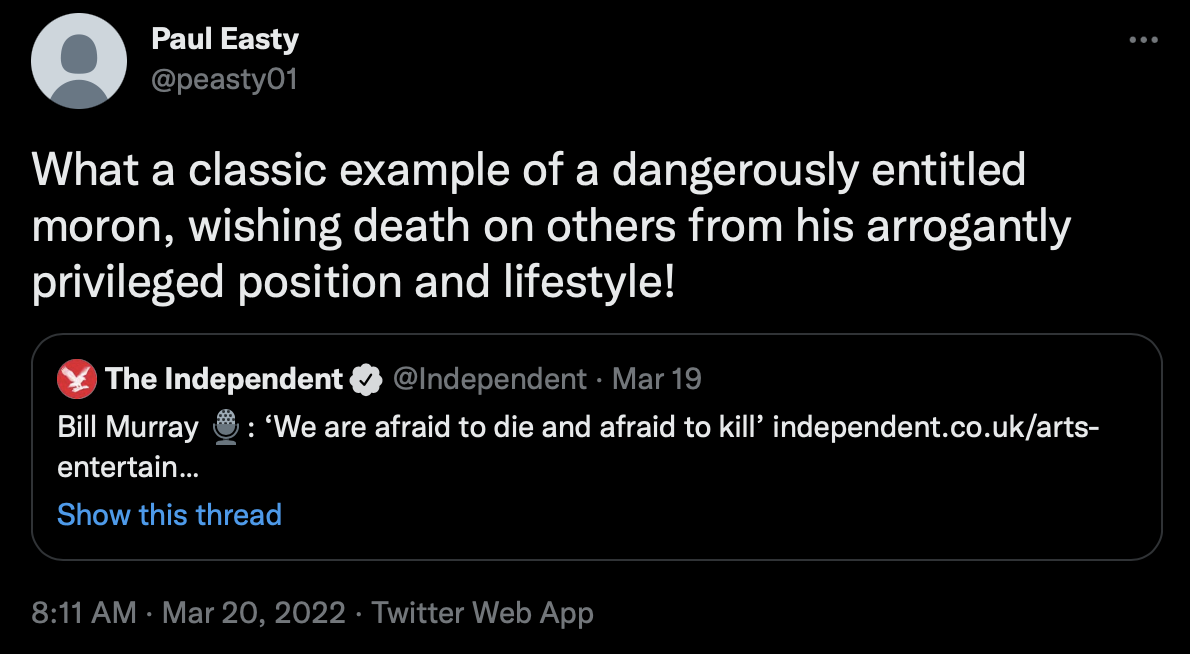 “I for one am glad y’all are finally gonna be reminded that Bill Murray is kind of an asshole,” prefaced @sarahekite. “Not a rock star or a beloved, cool grandpa, elevated to the same lofty status as Bernie or Mick Jagger or even The Dude. Feel free to peel that sticker off your car windows now. OOF” 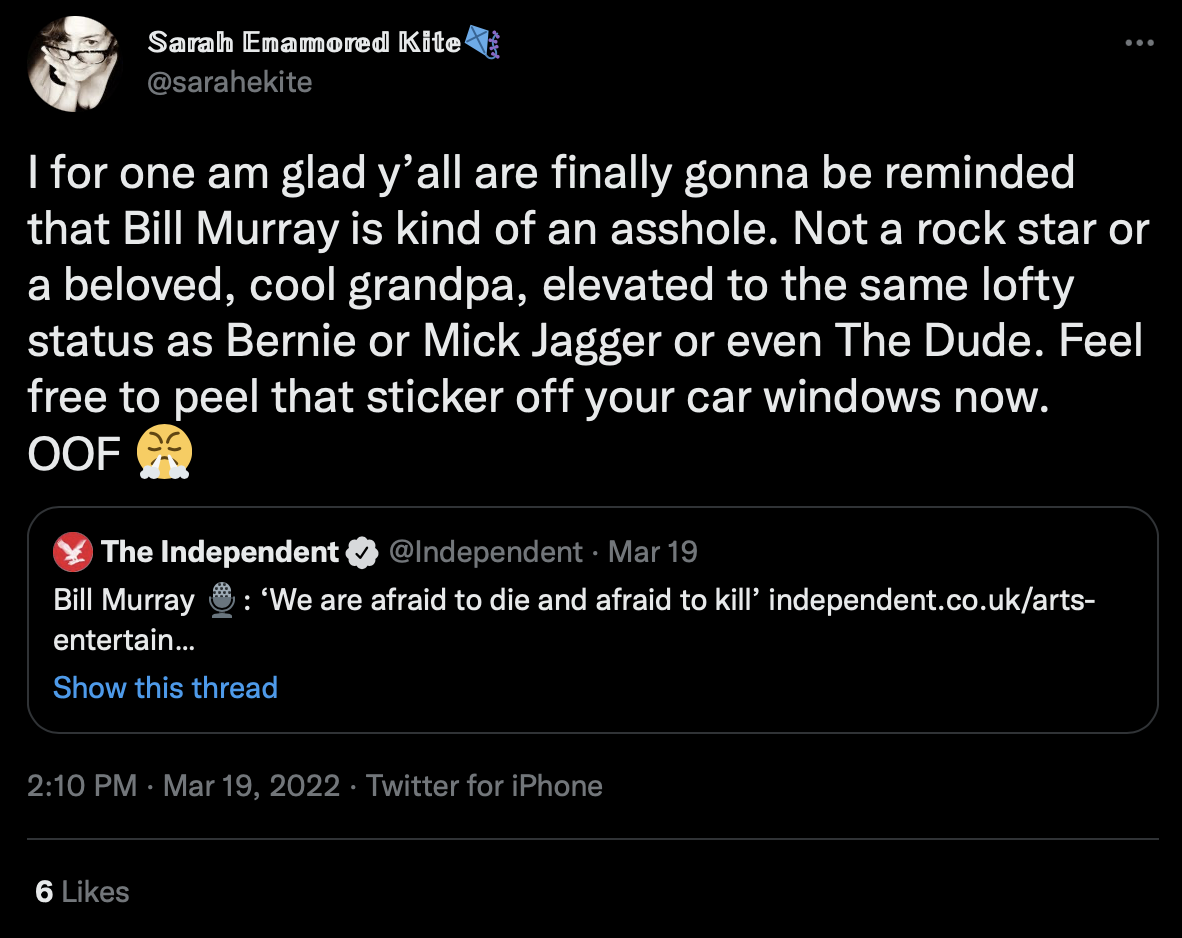 An interesting take was provided by @tzikeh, who not only misinterpreted the actor’s comments, but also encouraged him to go fight in the conflict between Russia and Ukraine. 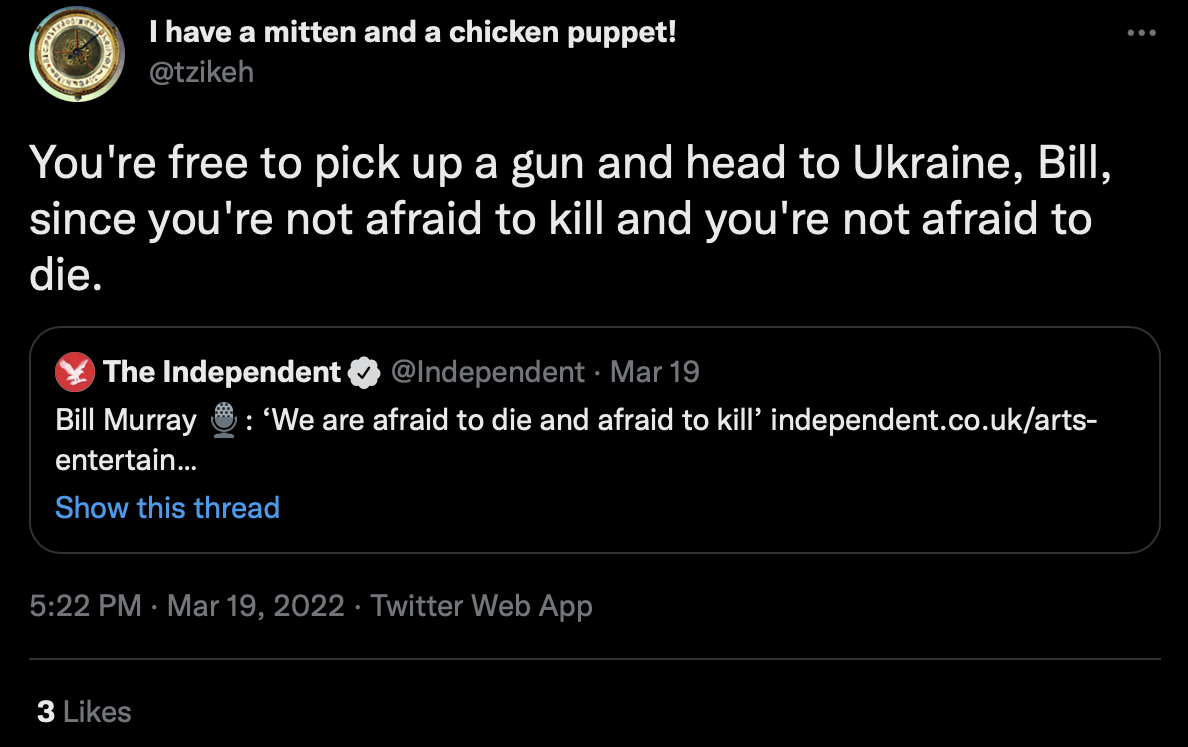 What do you make of Bill Murray’s comments about the COVID-19 pandemic? Let us know your thoughts in the comments section down below or on social media.