The Falcon and The Winter Soldier actor Sebastian Stan has been recently targeted by the cancel culture mob on social media, who took to Twitter to make the #ripsebastianstan hashtag trend, and the reason is as stupid as it gets. 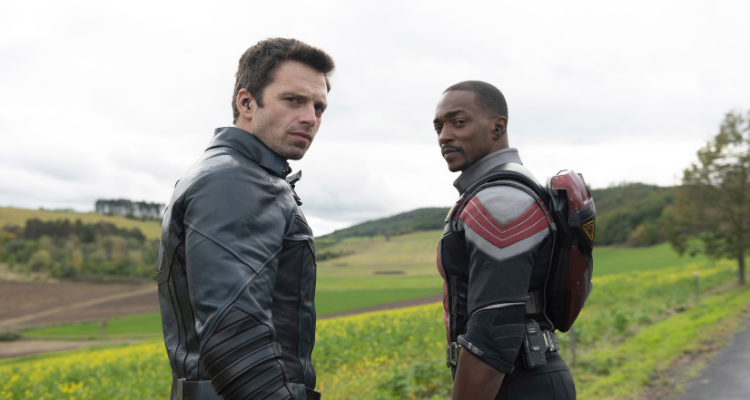 Twitter user Tuggs (@thattugglife) brought attention to the #ripsebastianstan hashtag, and called out cancel culture for making the aforementioned hashtag a trend on Twitter. 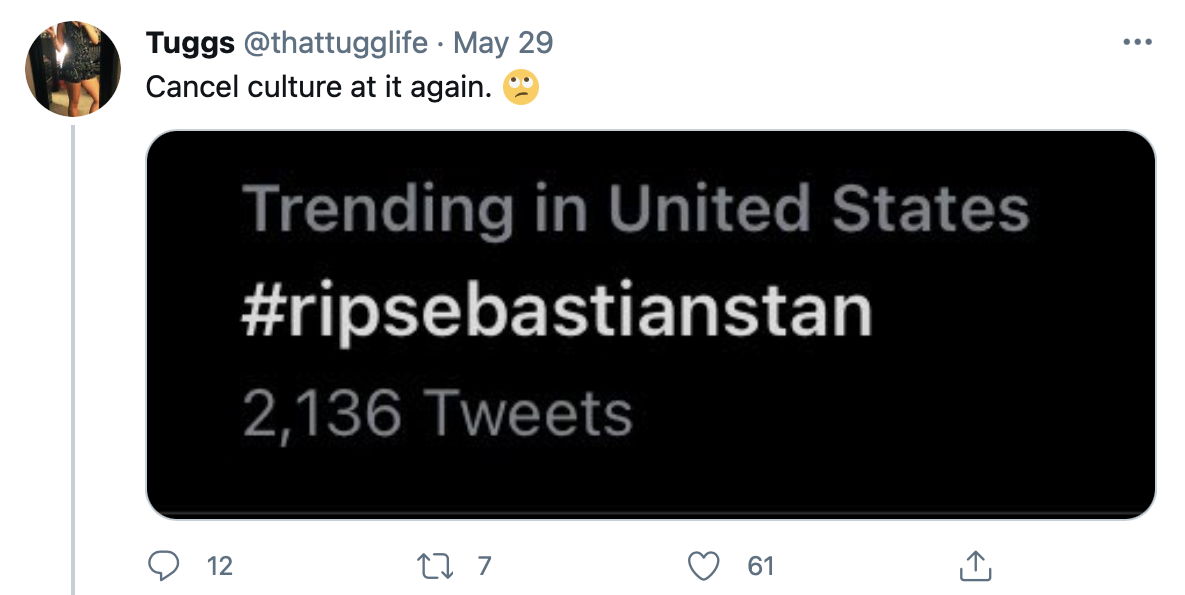 Sebastian Stan was cast in Pam & Tommy, which is a biographical drama that is based on Mötley Crüe drummer Tommy Lee (Sebastian Stan) and model Pamela Anderson (Lily James), and the actor has been sharing some behind the scenes photos as the character he’s playing.

A few weeks ago Stan shared an image of him as Tommy Lee praying to a statue of Buddha for World Meditation Day, and this is what prompted a very predictable knee-jerk reaction from social justice warriors; accusing the actor of cultural appropriation. No, really. 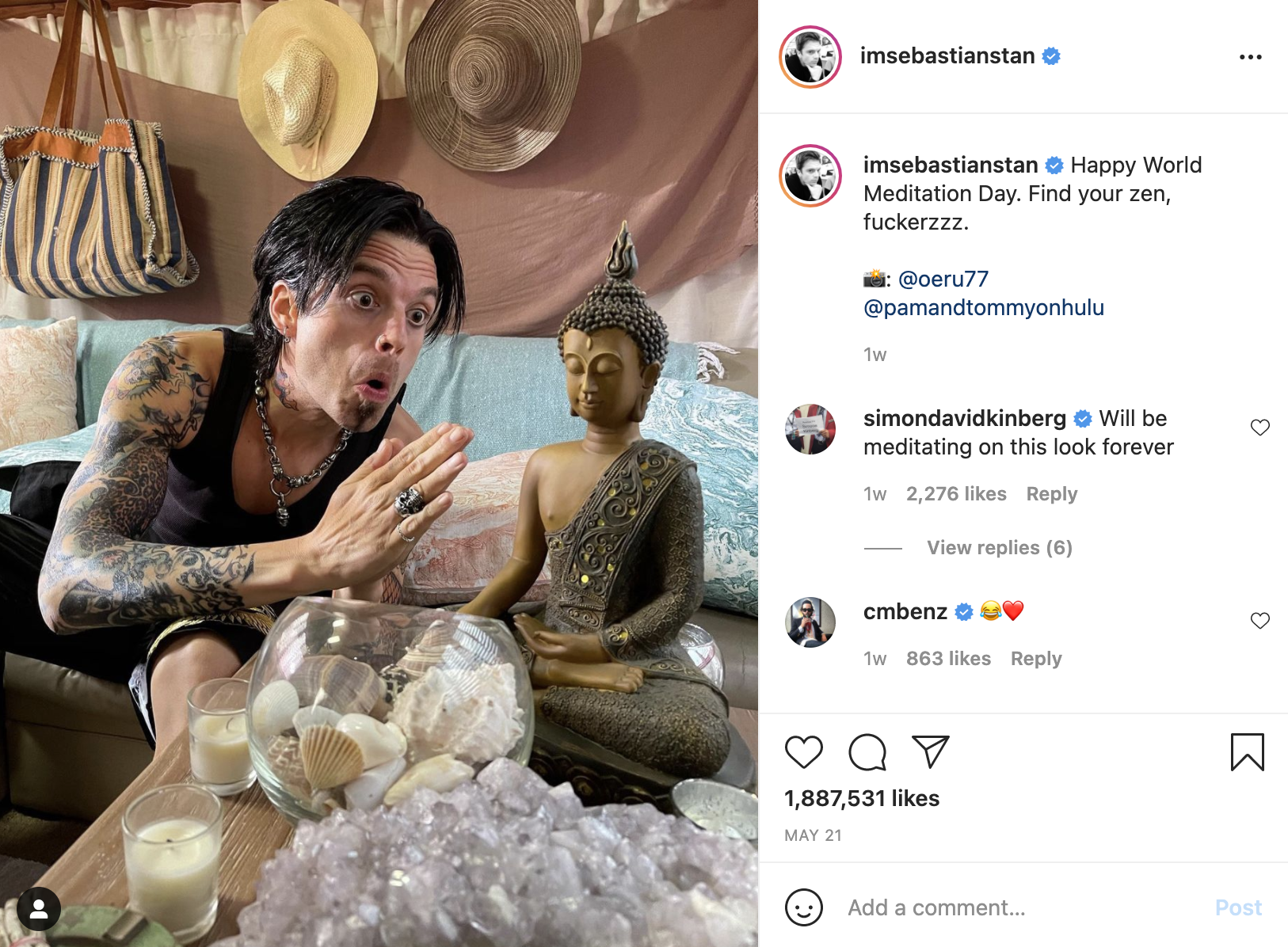 Tuggs also reveals that Twitter user @vanillaiceseb had shared some memes that Sebastian Stan had liked from the movie “I, Tonya” — a movie in which he also played a role — that were poking fun at how creepy he looked wearing the moustache he was rocking in the film.

“SEBASTIAN JUST LIKED ALL OF THESE IM UNSTANNING,” read the tweet by @vanillaiceseb. Tuggs did point out, however, that this account has since been suspended — although we do not know the reason why. 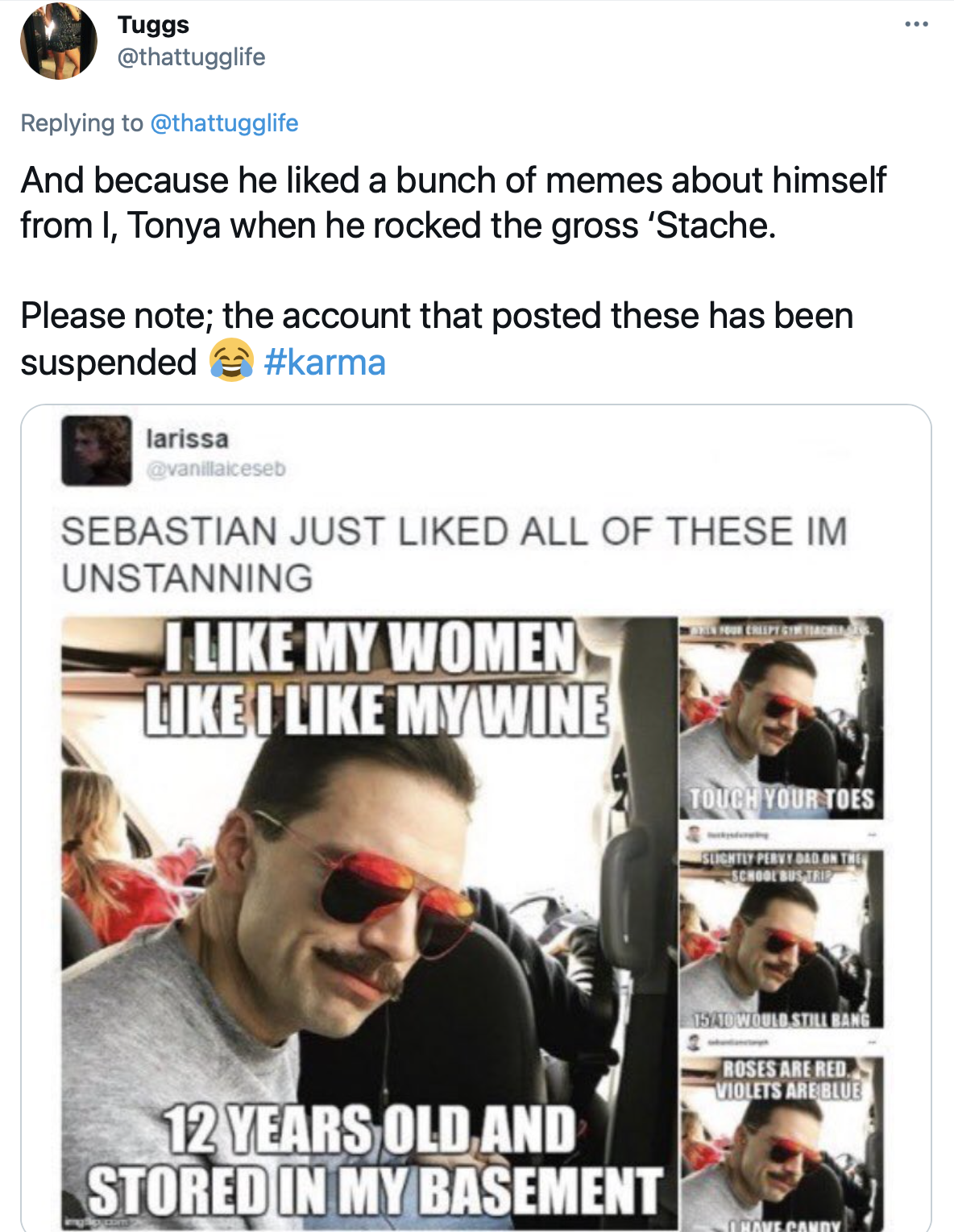 This wouldn’t be the first time that Sebastian Stan has been targeted by these woke social justice warriors. In July of last year, SJWs attempted to cancel him because of a picture his girlfriend Alejandra Onieva had been tagged on.

To provide further context, the picture saw Onieva wearing a Japanese kimono during “Asian night,” and this immediately triggered the cancel culture mob — who accused Stan’s girlfriend of appropriating cultures different than her own.

What’s more, the picture that woke SJWs dug up was from 2018, as if they were trying to find a reason to be offended by anything that either Alejandra Onieva or, by association, Sebastian Stan did. 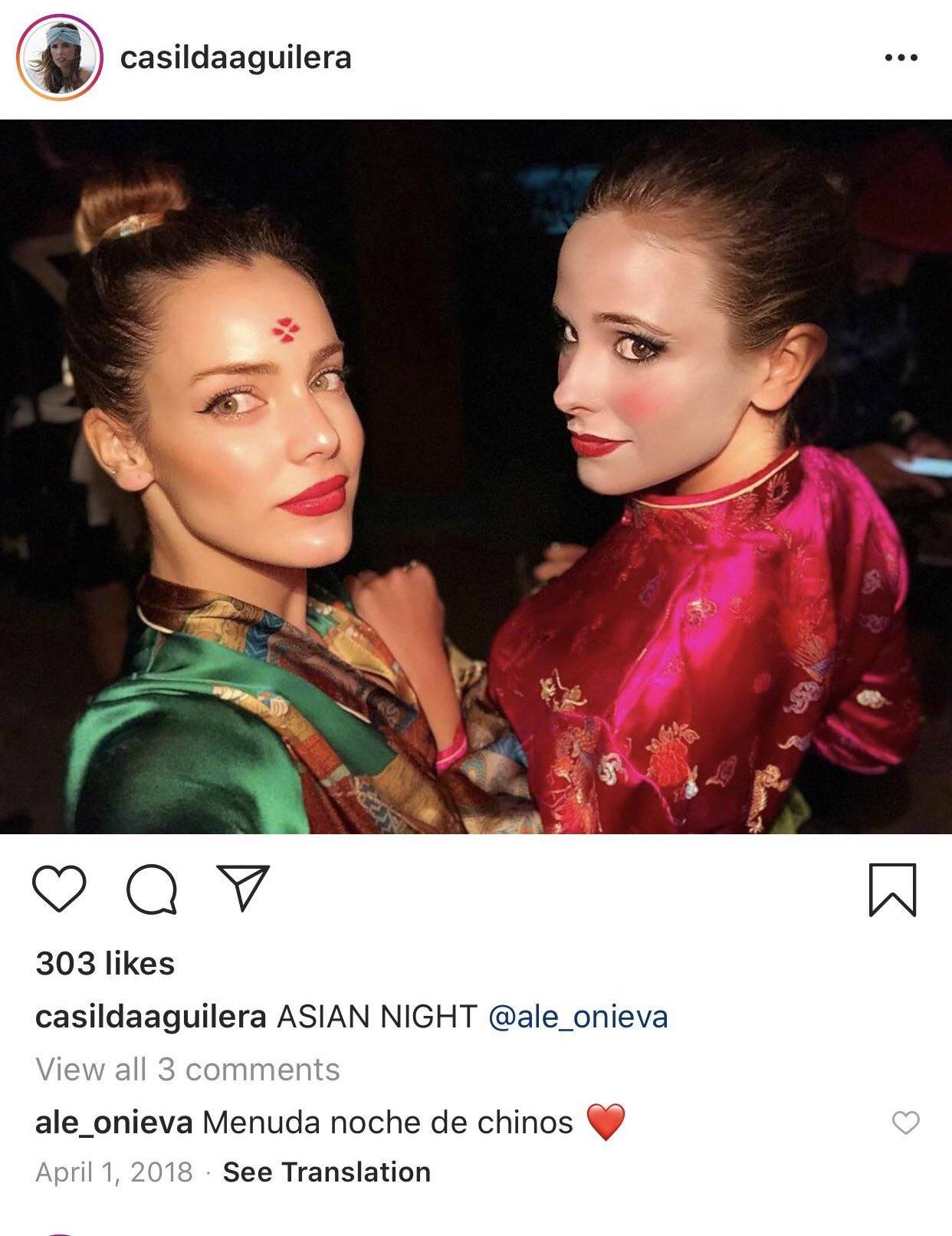 Ryan Kinel from RK Outpost brings up and old tweet that sums up what the whole controversy involving Sebastian Stan and his girlfriend, Alejandra Onieva, was all about. Long story short, Stan was accused of “ignoring his girlfriend’s racism.”

The offended user’s tweet read, “also so everyone knows why #sebastianstanisoverparty is trending, Sebastians gf posted this old photo which is very racist, and some of sebastians (old) fans posted about it on insta asking for it to be taken down, instead of taking it down sebastian and his gf blocked them.” 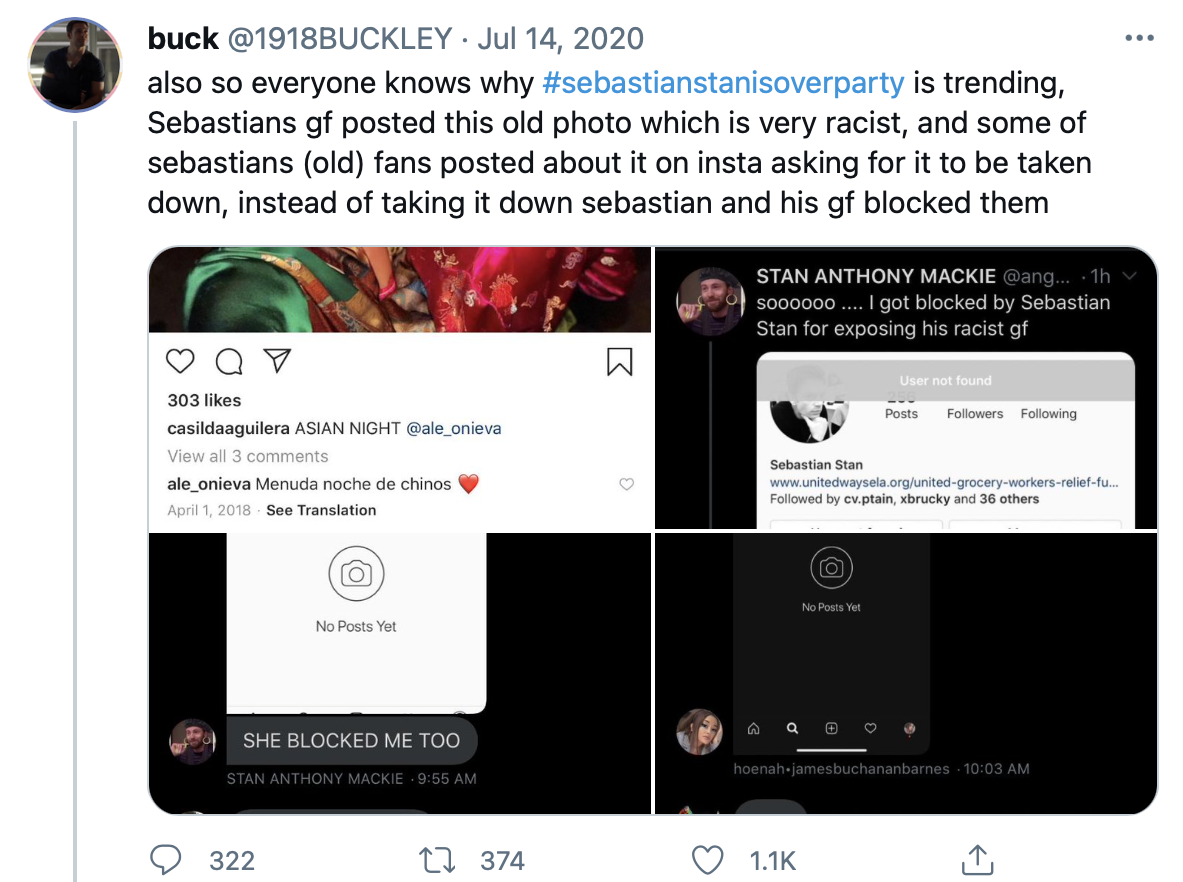 Kinel accurately asserts that, “All of these people, super upset that Sebastian Stan didn’t break up with his girlfriend or call her a racist for posting that there was like an Asian Night for Halloween or whatever it may be, because they use kimonos? Give me a f***ing break.”

“So, these are the types of things that have been going on for the past year or so when it comes to Sebastian Stan,” he continued.

Kinel then adds, “These people that are bitter and angry that he didn’t disown his girlfriend, that instead of taking a stand he said ‘go f*** yourself ‘ and he blocked them. No, this is ridiculous.”

And right he is, since this situation is ridiculous any way we look at it.

The tweets in response to Sebastian Stan’s “racism” actually go beyond simply being ridiculous, and we have collected a few of them to help drive this particular point home more efficiently.

Disgruntled Twitter user @ashtonnrogerss writes, “the amount of people using ‘we all make mistakes’ as an excuse to defend sebastian stan… mf who’s we? sure i’ve been insensitive but when i was like-10 and i wasn’t RACIST AND TRANSPHOBIC ??”

“make it make sense. y’all only defend him cause you think he’s hot. grow up,” the user continued.

Another user adds, “how can you look at sebastian stan and fully admit to public that you are racist and homophobic and that you’ll excuse whatever offensive s*** he’ll do?”

They continue, “like have you seen that man? that man ain’t worth sacrificing your dignity because he’s f***ing ugly.”

Here’s a pretty interesting take by a user that dares to call Sebastian Stan a racist while also deciding to use some racism to make their point even less valid, and show how much of a hypocrite these social justice warriors are.

“WHY ARE ALL OF THE PEOPLE I LIKE PROBLEMATIC?? I MEAN OBVIOUSLY I DONT LIKE THEM ANYMORE BUT LIKE.. DAMN WTF IS WRONG WITH YOU..” asks the user.

They continue, “FIRST HARRY STYLES AND CHRIS EVANS THE F***ING ZIONISTS THEN SEBASTIAN STAN THE F***ING RACIST??? HELO??? I HATE WHITE PEOPLE WHAT IS WRONG WITH YOU”

This user suddenly decided to say that they hate white people, which is a pretty racist and ignorant statement in and of itself.

“Chris Evans a Zionist….Sebastian Stan a racist….Ryan Reynolds got married on a plantation…..the blacks are running out of white men,” reads a tweet by yet another disgruntled user.

With another hot take we have a user that has had enough with Sebastian Stan and those who defend him, stating, “you know what?? im gonna say it. the fact that sebastian stan was okay with dating a racist AND defending her was ENOUGH for y’all to unstan him long ago before you knew the other s***ty stuff he’s done/said but you just chose to ignore that”

Related: Upcoming Spider-Woman Director Olivia Wilde Attacked On Social Media By The Cancel Culture Mob After Comparing Changing Careers To “Coming Out Of The Closet”

“‘i didn’t know how bad sebastian stan was,'” sarcastically points out another Twitter user, adding, “no baby you knew. you’ve been on twitter long enough to know about how awful he is.”

The user continues, “don’t act clueless. y’all just don’t like listening to people of color when we say your white favs are racist.”

Sebastian Stan has not yet addressed the “controversy” and it is likely that he never will, since the outrage mainly comes from a very vocal minority of people who want everyone to conform to their self-proclaimed high moral standards; dismissing any ideas that don’t agree with theirs.

What do you make of social justice warriors attempting to cancel Sebastian Stan? Let us know in the comments section down below or on social media.