The widely popular Captain Tsubasa franchise has become the latest victim of widescale crypto-based art theft, as a number of images produced across the series’ long history have been stolen and offered as NFTs to unsuspecting customers. 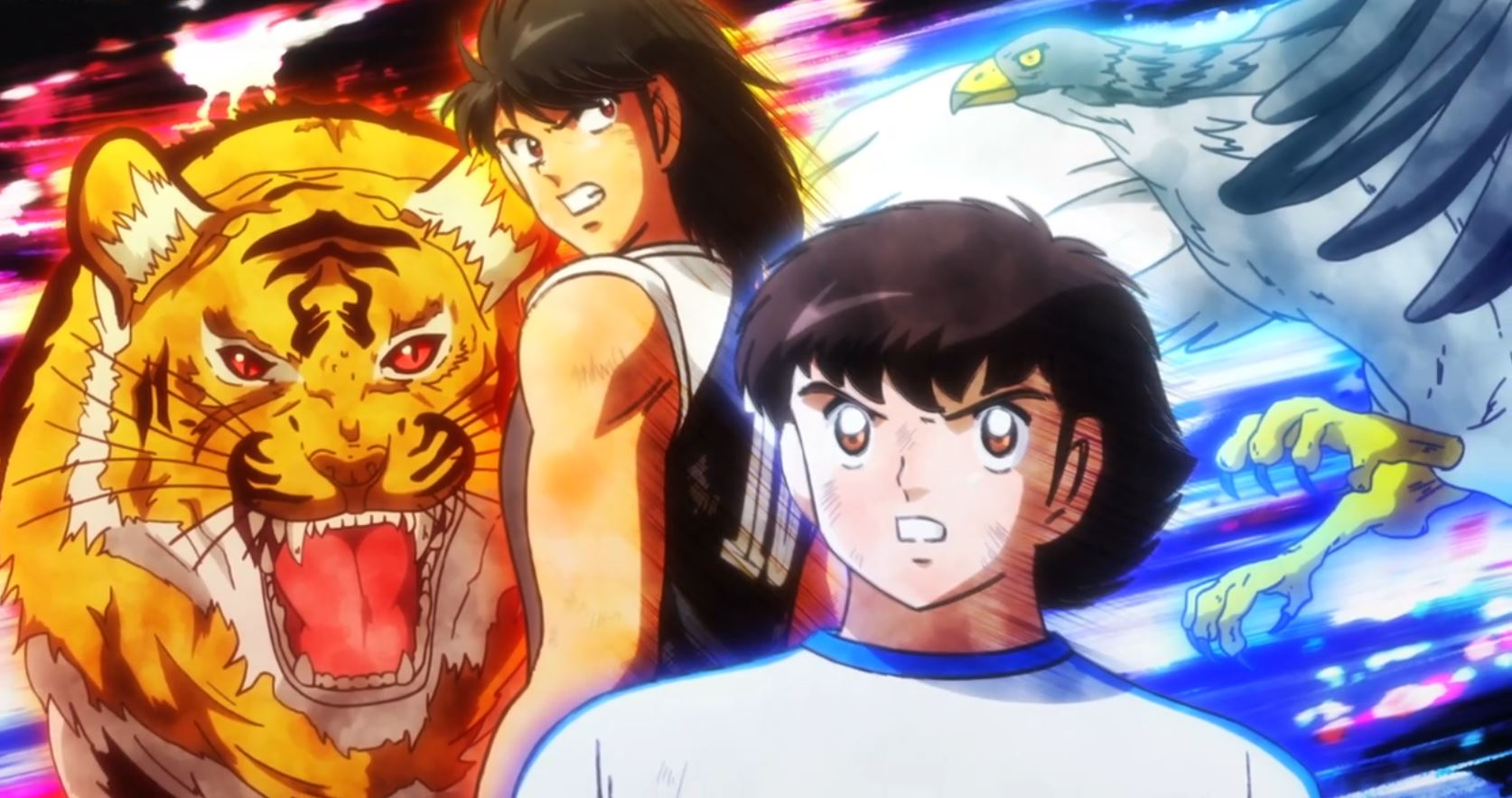 Ever since the widespread adoption of the concept, thieves have been stealing various art – including music – and selling them back as NFTs.

This trend has become so widespread that many artists no longer feel safe posting their art for fear that it will end up on one of the internet’s various NFT marketplaces. 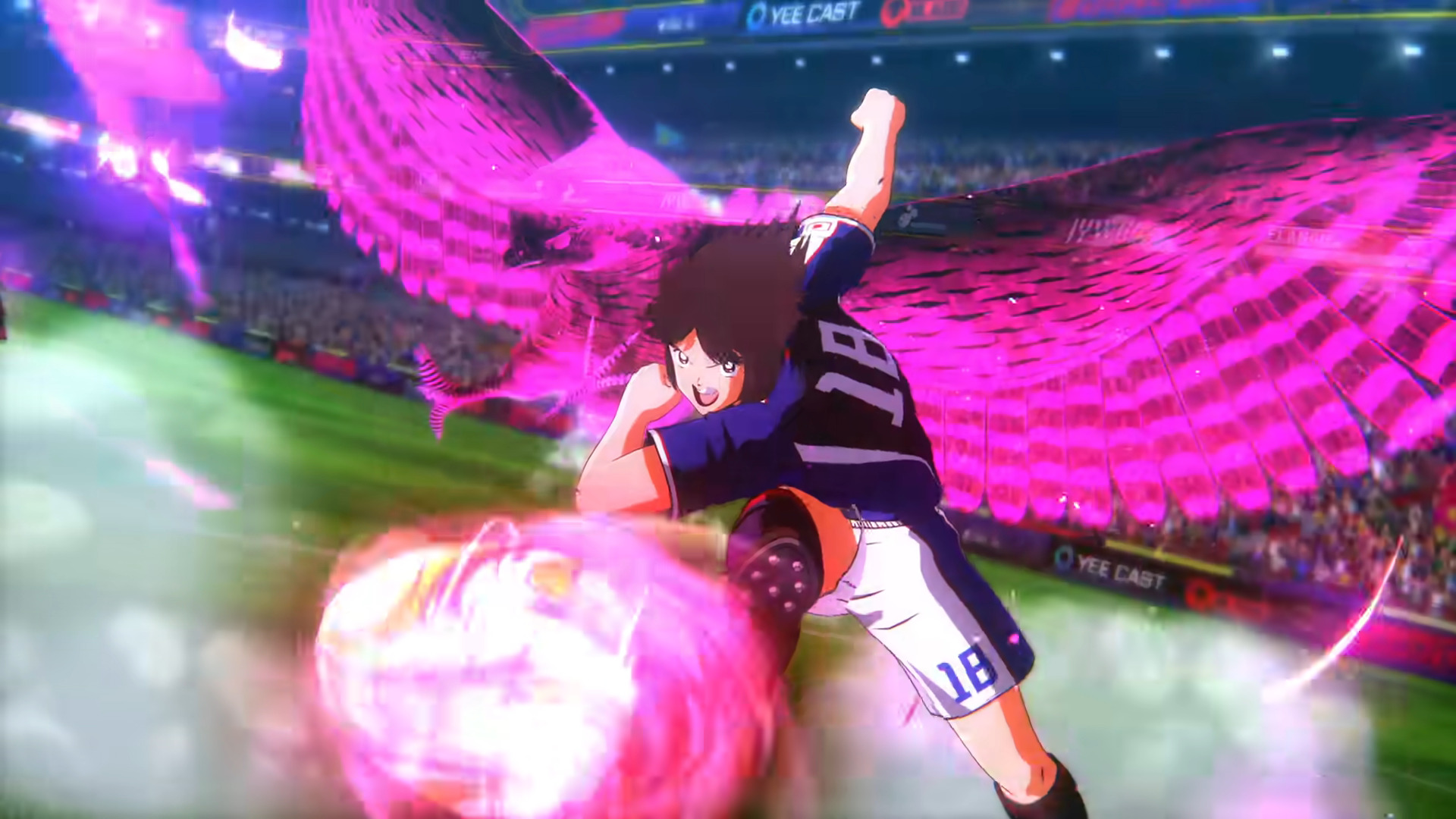 Thankfully, in the case of Captain Tsubasa, fans’ swift actions have already led to intervention into the situation by both the series’ mangaka and the franchise’s operating organization.

These unauthorized NFT releases were first teased by a supposed manga-centric metaverse endeavor, aptly named the Mangaverse, who on May 27th promoted their thievery plans with an image of Tsubasa Oozora himself.

“With #Mangaverse you’ll not only have fun in this immersive world, but also profit from the P2E and NFT features,” the metaverse’s operators wrote. “We’re looking forward to unveiling more about this Anime Universe over time!” 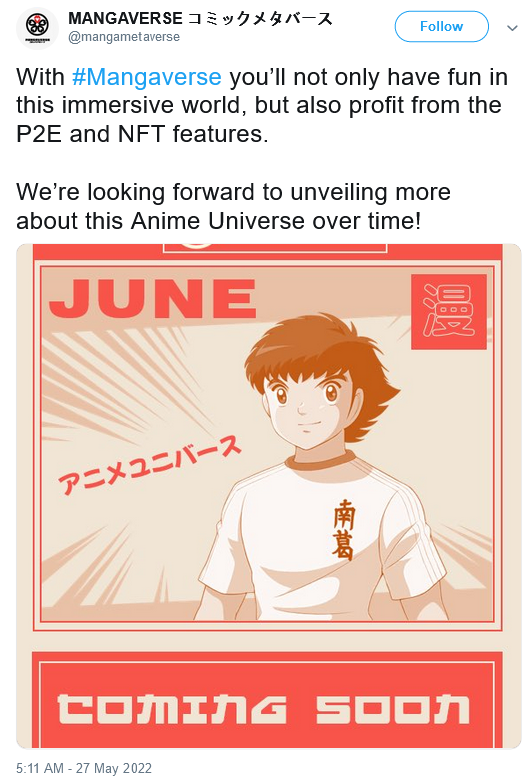 The second was unveiled on June 2nd when the NFT theft operation’s apparent ringleader, a group going by the name Football Metaverse Private Ltd., invited followers to enter a giveaway for one of the stolen pieces.

In an image of the NFT itself, Kojiro Hyuga can be seen preparing to kick a flaming soccer ball. 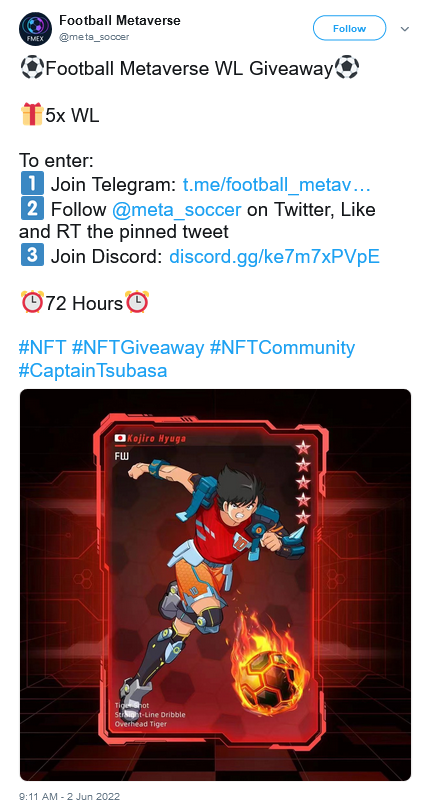 This NFT of Kojiro was but one of several being advertised. The full teased collection can be seen below: 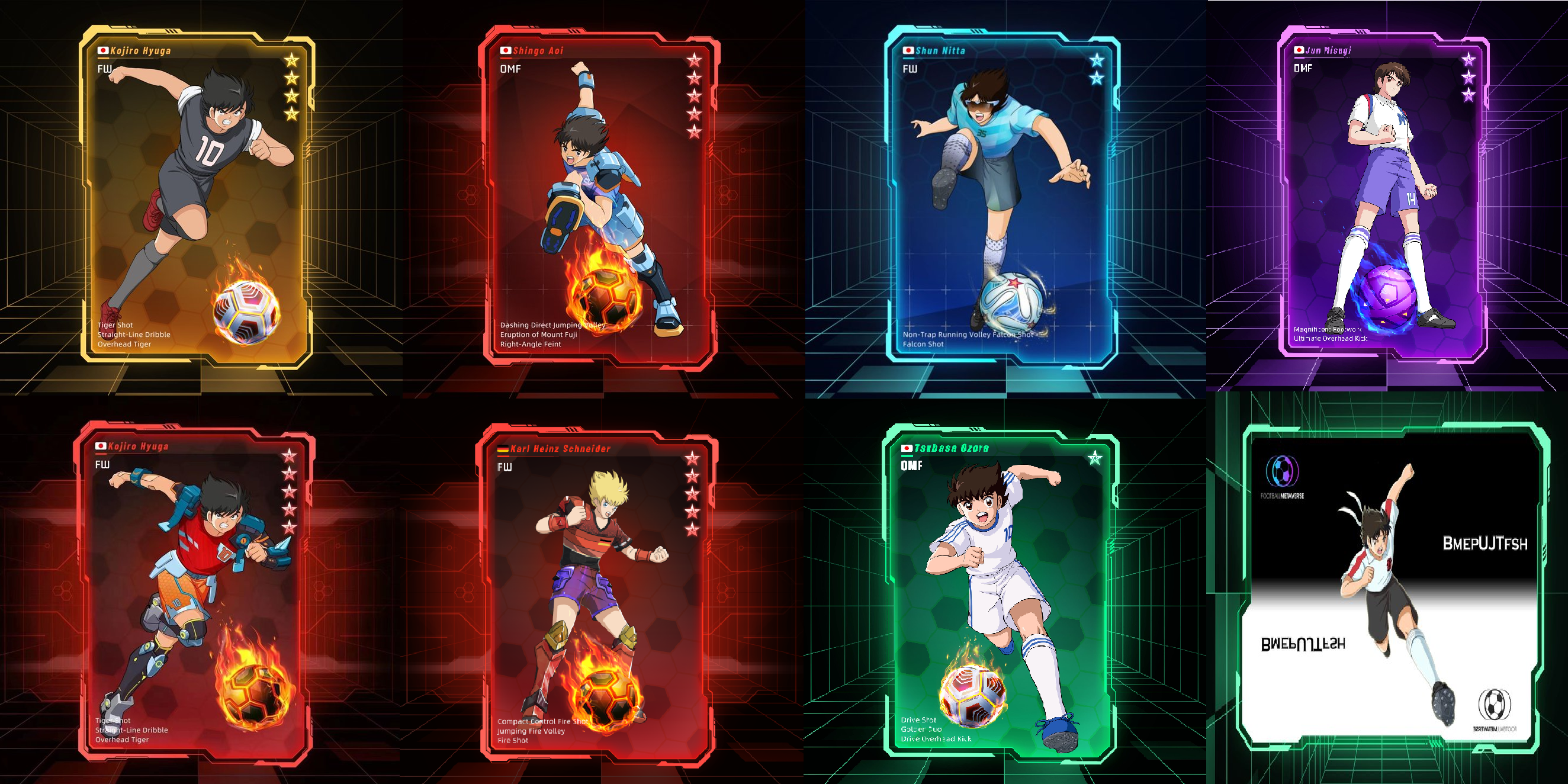 Questioning the legality of these NFTs, fans soon brought the items brought to the attention of various individuals involved with the development of Captain Tsubasa media.

On June 16th, The Captain Tsubasa PR Twitter account brought attention to the theft by quote tweeting the two NFT accounts at the center of the thefts, beginning with Mangaverse Private Ltd. 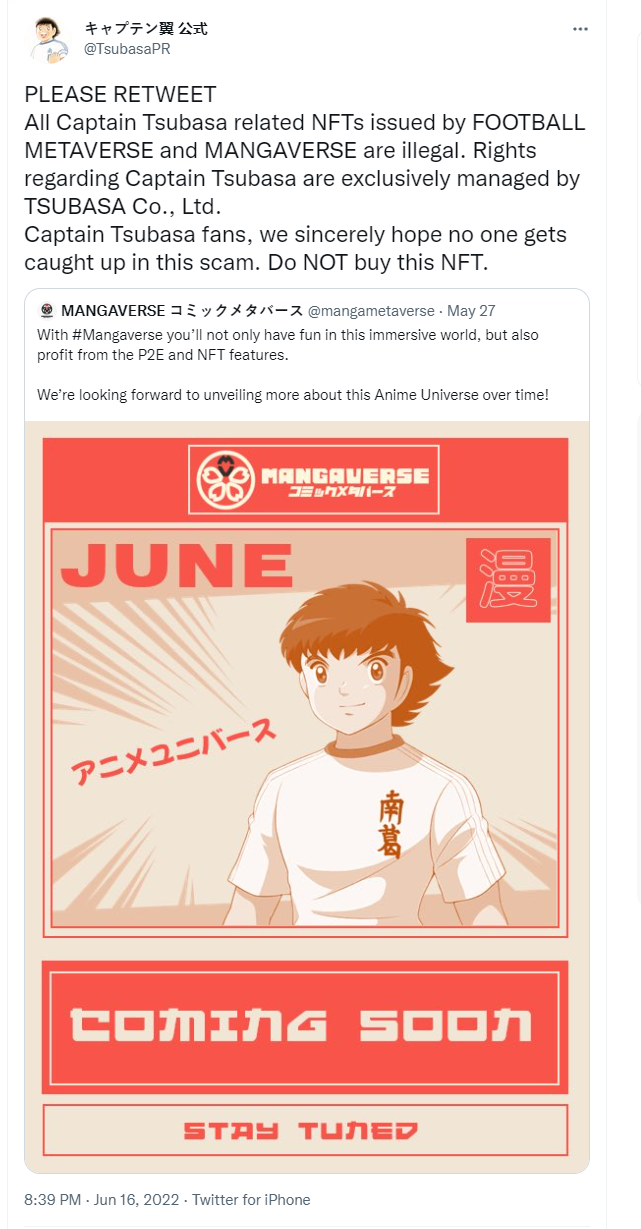 This was followed by one highlighting the above tweet by @meta_soccer.

“PLEASE RETWEET” wrote the account in both of the retweets. “All Captain Tsubasa related NFTs issued by FOOTBALL METAVERSE and MANGAVERSE are illegal. Rights regarding Captain Tsubasa are exclusively managed by TSUBASA Co., Ltd. Captain Tsubasa fans, we sincerely hope no one gets caught up in this scam. Do NOT buy this NFT.” 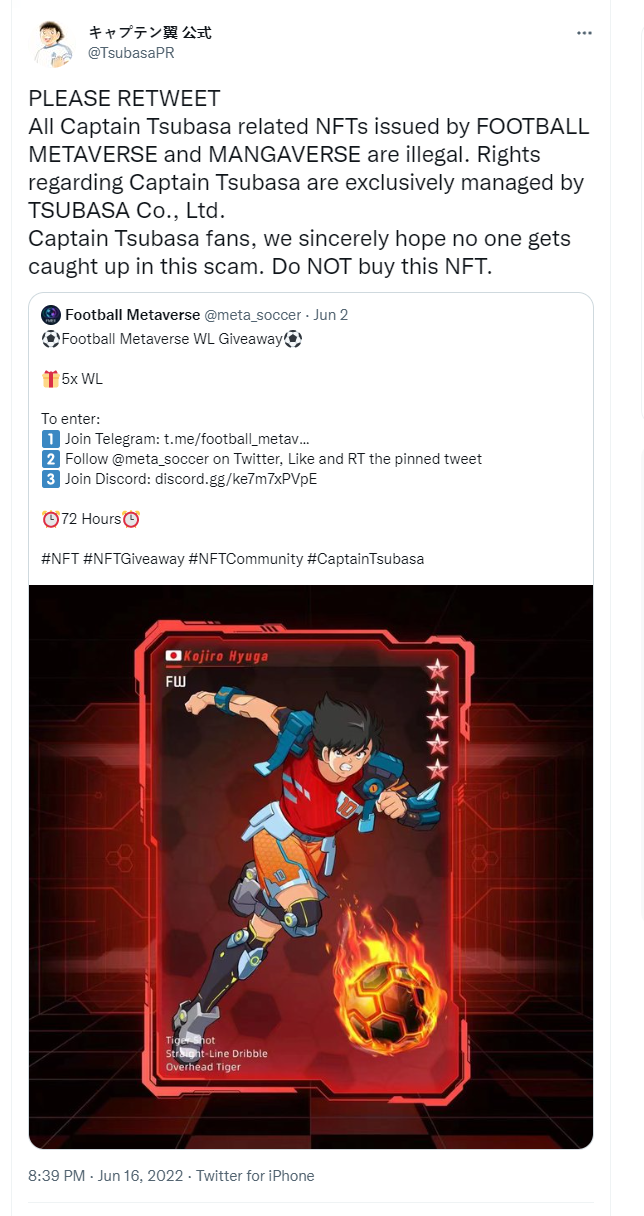 Later elaborating on the situation, TSUBASA Co., Ltd Representative Director, Yoshihiro Iwamoto revealed that the company had been aware of Football Metaverse’s theft for several months.

“As I just tweeted in an official ‘Captain Tsubasa’ tweet, a company that does not own the rights is trying to sell NFT of ‘Captain Tsubasa’, Iwamoto tweeted (translated via DeepL) through his personal account. “Even though I have been communicating with this FOOTBALL METAVERSE company for several months and told them that their rights are illegal (fraud), they are trying to force their way through …… too awesome!” 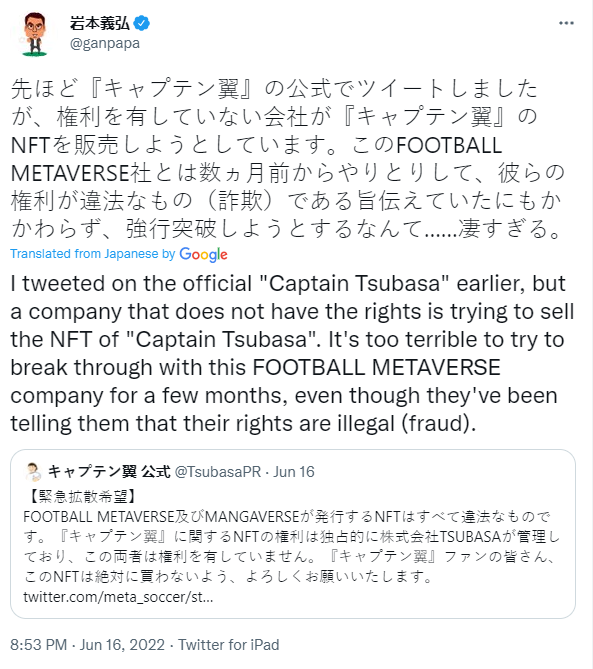 “What makes this case so bad is that they are trying to sell NFTs of soccer players around the world in the future, based on the results of selling Captain Tsubasa’s NFTs (they clearly state that those who bought Captain Tsubasa’s NFTs will have priority to buy soccer players’ NFTs in the future),” he continued. “This could very well turn into a scam against soccer fans around the world.” 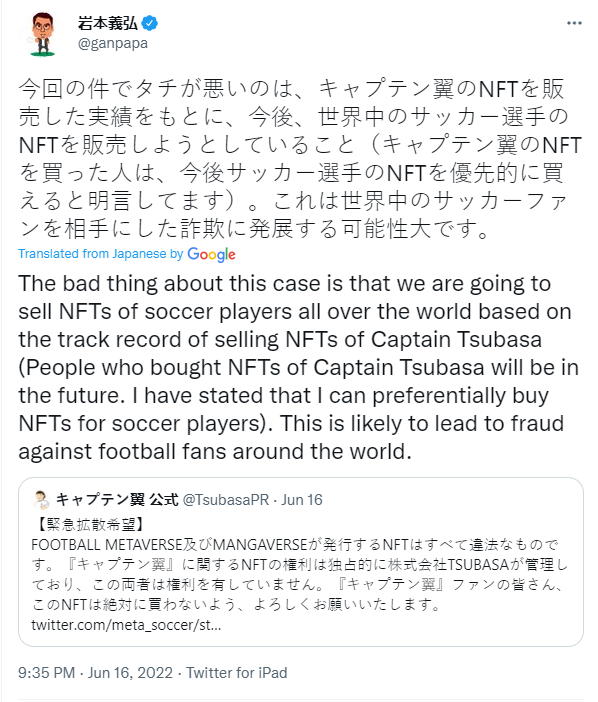 “In other words, they are clearly convinced!” he exclaimed. 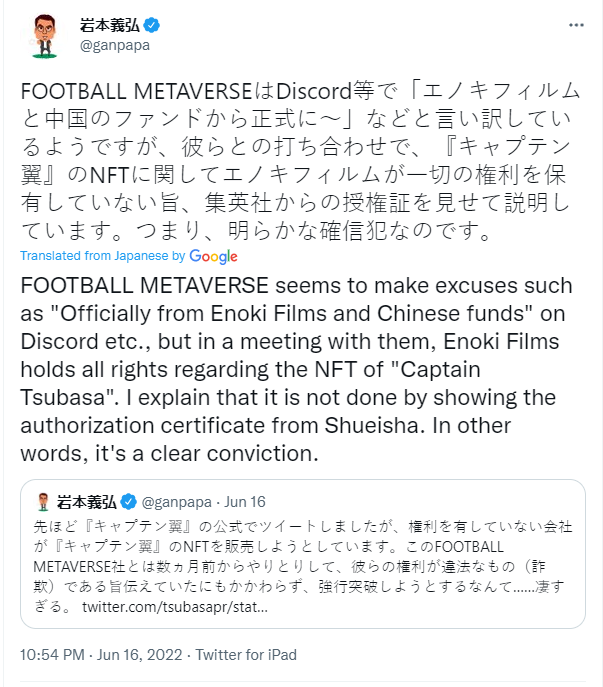 “This football metaverse, to my surprise, says that if you have a Captain Tsubasa NFT, you can also participate in the drawing for World Cup tickets,” he added, before asserting that such a contest was “(120% violation of FIFA’s rights!)”

“LOL,” he laughed. “They seem to be saying that it’s all sorts of misunderstanding and that they will confirm and issue another official statement, but based on the communication so far, it’s an absolute lie.” 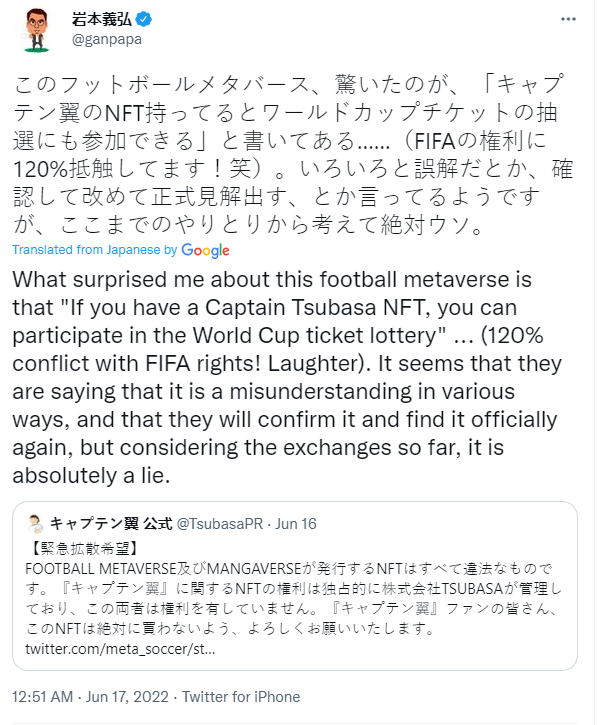 Proceeding to analyze the Football Metaverse’s bootleg Kojiro Hyuga NFT, Iwamoto spoke to the main indicator that the item was unofficial, explaining, “In the first place, the 1983 animation and the 2018 animation are mixed up, and it has been processed in such a way that it should never be done, and how on earth did they think they could do this and sell it safely? That part is a real mystery.” 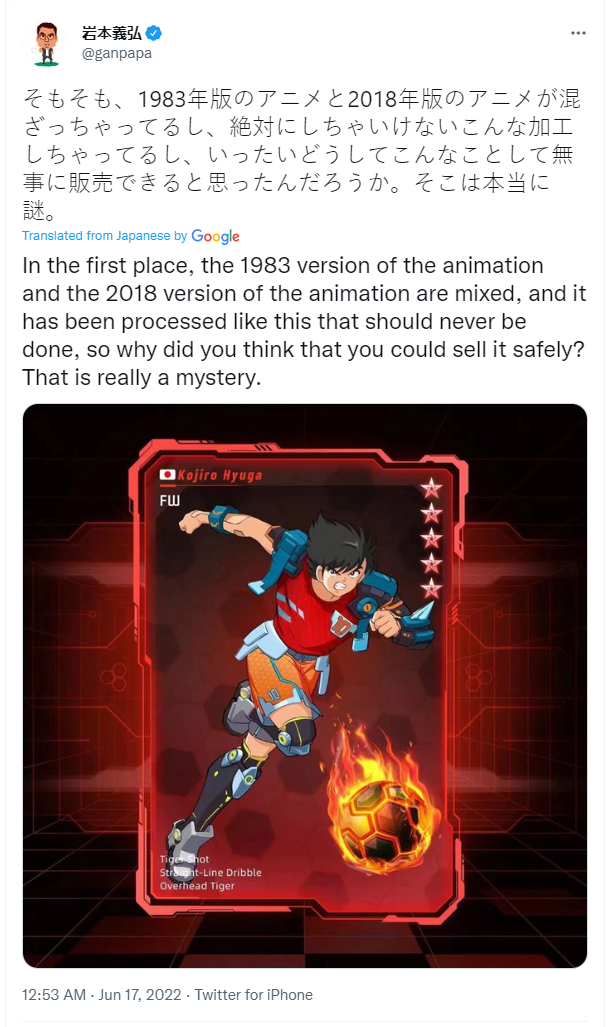 Captain Tsubasa mangaka Yoichi Takahashi was also unpleased with their art being stolen and turned into NFTs.

Taking to his personal Twitter, Takahashi asked, “To our eminent Tsubasa Lovers, Right now, Captain Tsubasa’s NFTs are illegally being sold. The story is already spreading in Japan, but it is highly possible that our fans overseas are still deceived. Could you give us a hand and help this message get across?” 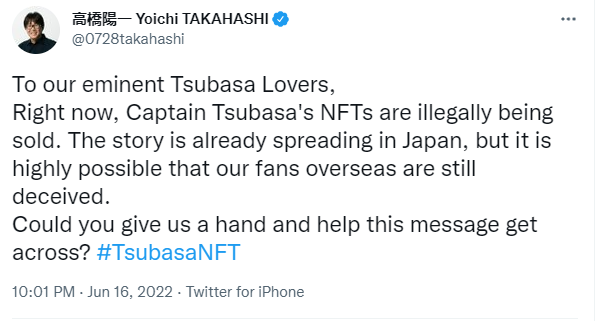 Attempting to salvage the situation, the Football Metaverse reached out to Takahashi on Twitter – in doing so confirming Iwamoto’s suspicions that they had knowingly been committing fraud this entire time.

“Dear Yōichi san Good evening I would like to reach out to you regarding your comments on us for your renowned work ‘Captain Tsubasa’,” they tweeted, reiterating the very same rhetoric Iwamoto claimed was being put forth on the group’s Discord server. “Our side do have a contract signed with Enoki Film and new Chinese Funds to produce second derivatives adaptations out of Captain Tsubasa IP.” 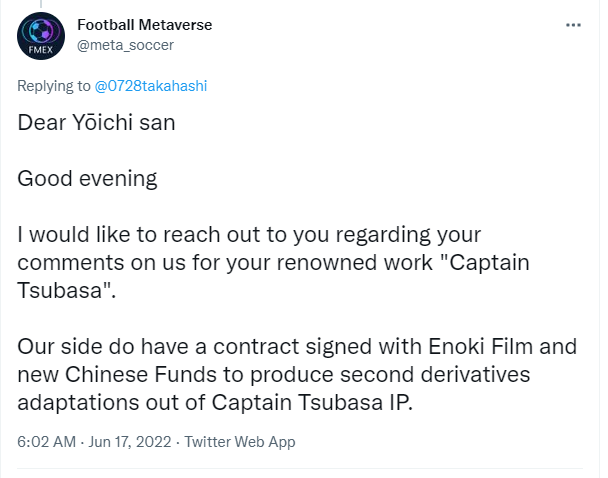 “This is limited to the anime series of Captain Tsubasa 1983, episode 1 to episode 128,” they said. “All of our nft characters are based solely on this series as we understand that these are within Enoki film/New Chinese Funds licensing rights.” 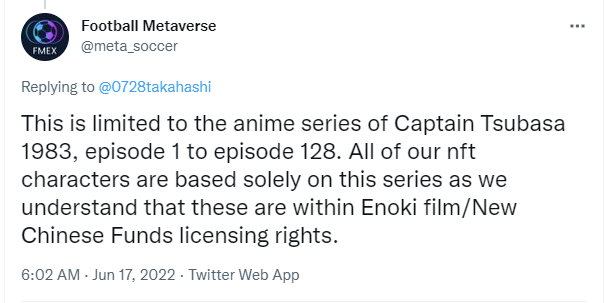 “On our side, we respect and admire your work and thus we would hope to understand how we might have infringed the IP rights in this case,” they added. “For your info, we also have similar IP licensing rights with other footballers and football teams.” 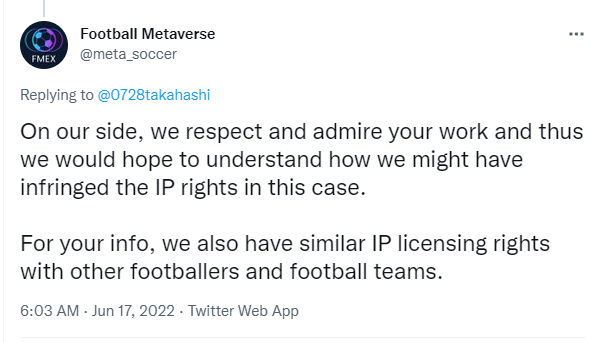 The Football Metaverse admins eventually concluded, “We hope to have a discussion with you to see how we could iron out all the differences to resolve this issue Please contact us at [email protected] or through our twitter. We are very sincere in resolving this issue and would be looking forward to hearing from you. Thank you:)” 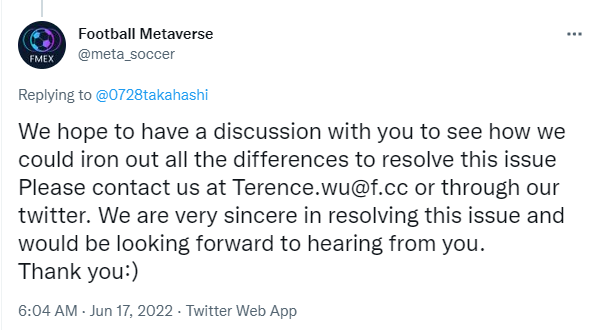 However, these attempts to intentionally decieve the public only served to draw more criticism their way, beginning with Iwamoto calling them out on their cowardly, snake-oil-salesmen lies.

“I have explained many times that “Enoki Film does not have any rights to the ‘Captain Tsubasa’ NFT,” and then they deleted my e-mail address and ran away, and then they tried to force their way through.”

“And now there is no discussion or anything,” he asserted. “but just in case they contact me I’ll talk to him.” 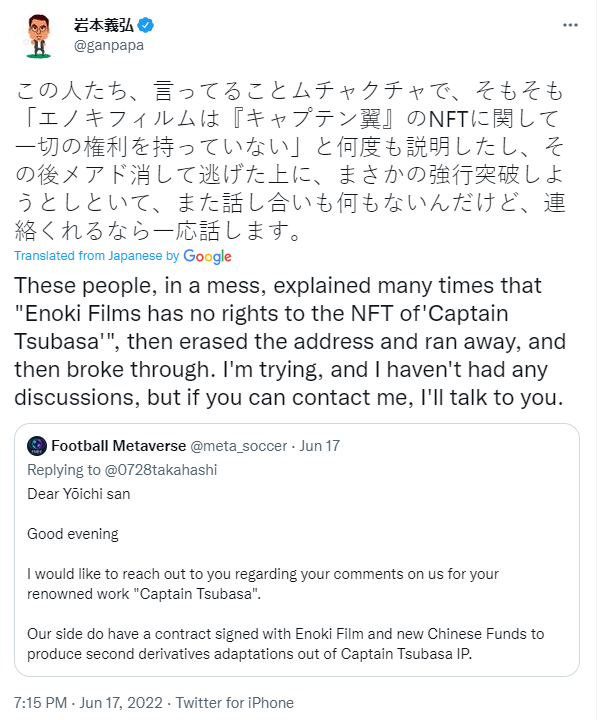 Takahashi also responded to Football Metaverse’s tweet and confirmed Iwamoto’s aforementioned statement that the NFT theft has been an ongoing problem for at least a few months now.

“Please message the manager at TSUBASA Co. who took contact with you few months earlier regarding this matter,” he told the group.

To this, the group asked, “Dear Yochi San Sorry to bother but would it be possible to provide us with the contact personal email or any form of contact so that we can contact him immediately? Thank you:)” 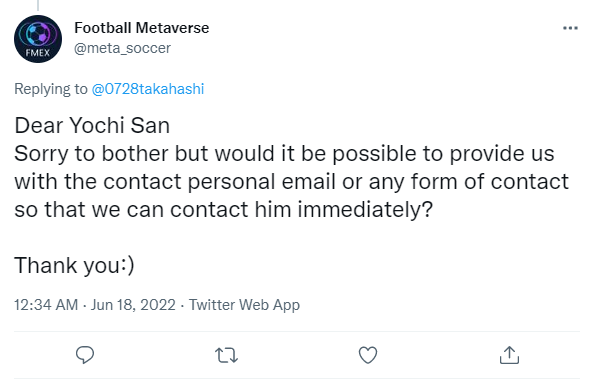 Proving he already knew of the communication issues between them and Iwamoto, Takahashi replied, “I think you already know him since you have taken contact with him earlier on this year, but please contact the CEO of TSUBASA Co., @ganpapa.”

Once again quote tweeting the Captain Tsubasa PR account’s initial warning of the fraudulent NFTs, Iwamoto stated, “FOOTBALL METAVERSE claims on Discord and elsewhere that they have cleared the rights properly and that they have a contract with New Chinese Fund, but neither FOOTBALL METAVERSE, New Chinese Fund, nor Enoki Film have any rights to Captain Tsubasa’s We do not own any NFT rights. Please do not ever buy their NFTs!” 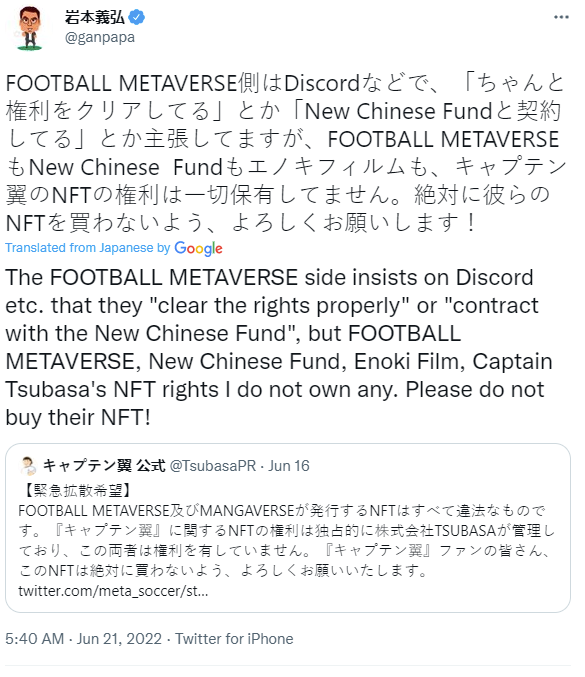 So, what about the companies at the center of the scandal and how extensive is the theft?

In a thorough investigation of the NFT companies at the center of this scandal, our eyes were opened to just how shady their business practices truly are. 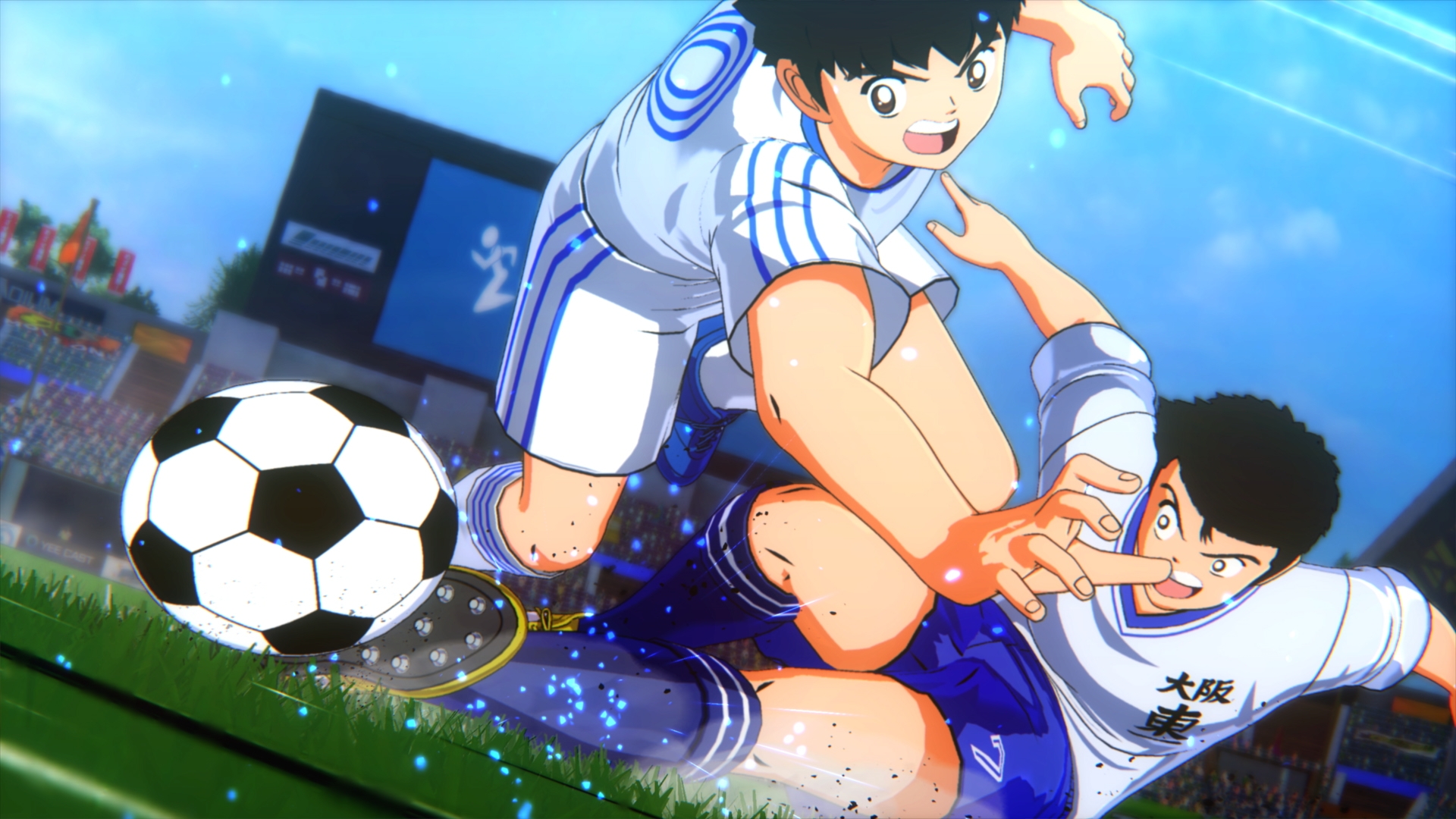 According to business website Companies.sg, Football Metaverse was registered in Singapore as a Private Company Limited by Shares on November 29, 2021.

Football Metaverse’s Primary Singapore Standard Industrial Classification (SSIC) description listed as “Development of software and applications (except games and cybersecurity)”, while their secondary SSIC description specifies that they also engage in the “development of computer games.” 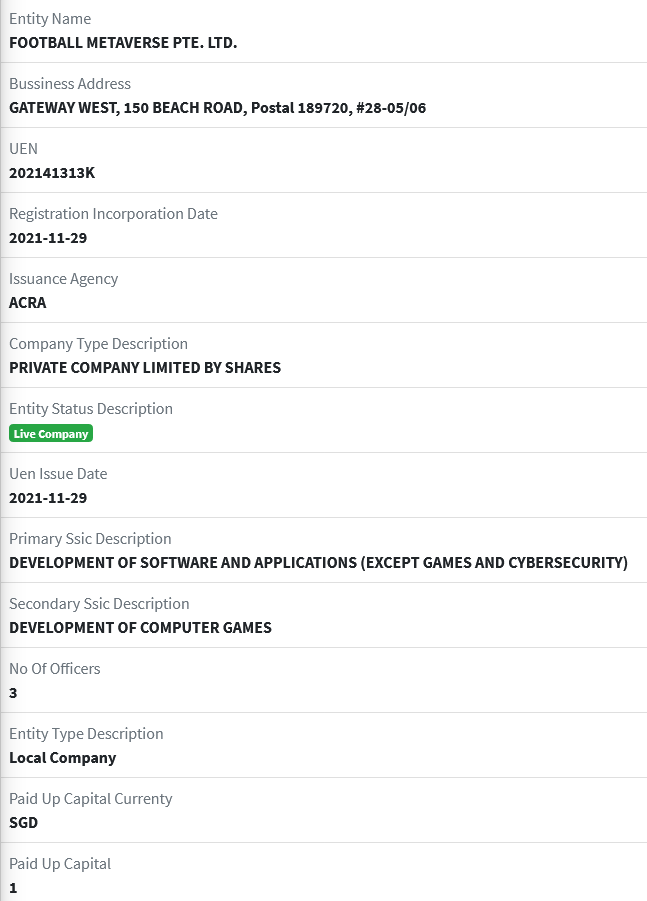 On May 27th, Football Metaverse issued their first “official press release”, sharing a copy of their aforementioned “Letter of Authorization on Copyright” for Captain Tsubasa alongside the explanation that they had secured these “exclusive global IP rights” from a New Chinese Fund Co. Ltd, who was tagged as @hoshinyan_anime.

This account belongs to the 26-episode Hoshi no Shima no Nyanko anime, an animated adaptation of the company’s mobile game of the same name, and has not been updated since the series finished airing in October 2019. 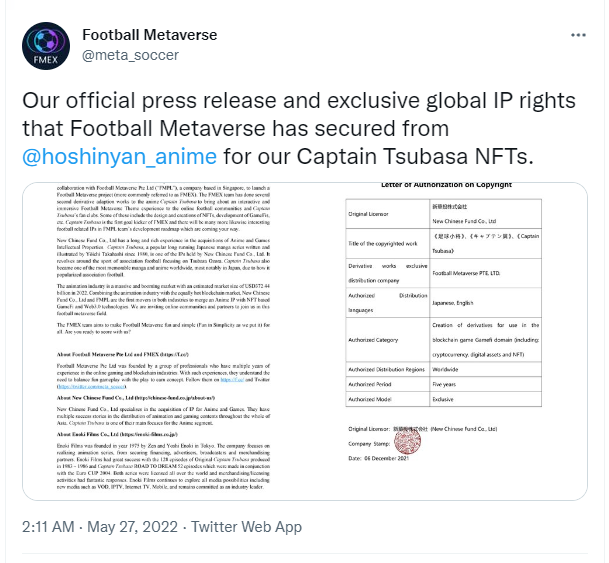 The press release claims that New Chinese Fund Co., Ltd specializes in  acquisition of IPs for “Anime and Games”, and boasts of the company’s multiple alleged successes with the distibrution of such media across the “whole of Asia”. Captain Tsubasa is cited as one of their main focuses for the Anime segment.

However, this seeems quite unlikely, as Denstu has the rights for distribution in 55 Asian territories including China and India for Captain Tsubasa anime & games. 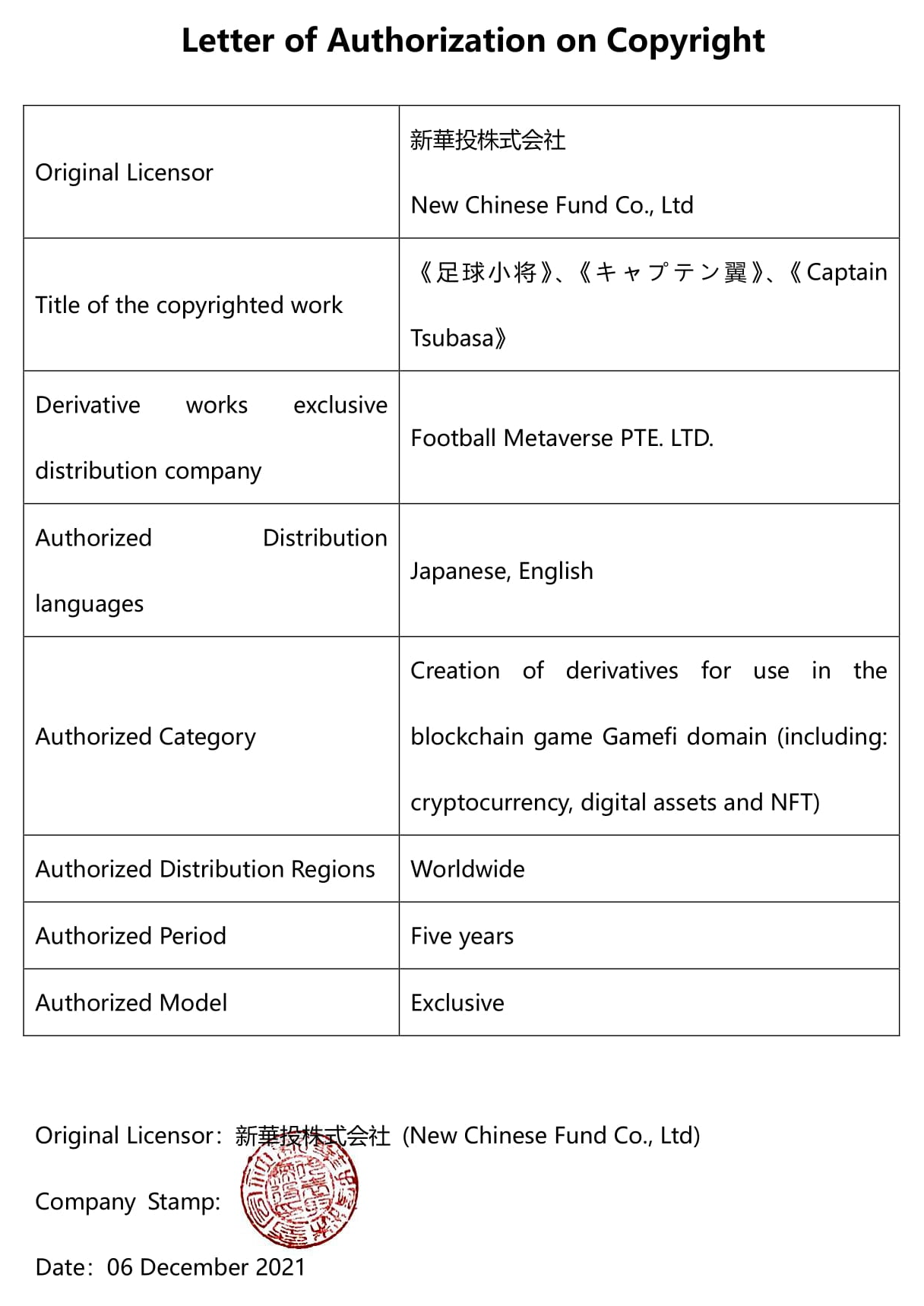 We attempted to pull up New Chinese Fund Co., Ltd’s copyright list off their recently created website, but were instead met with the endless loading screen seen below: 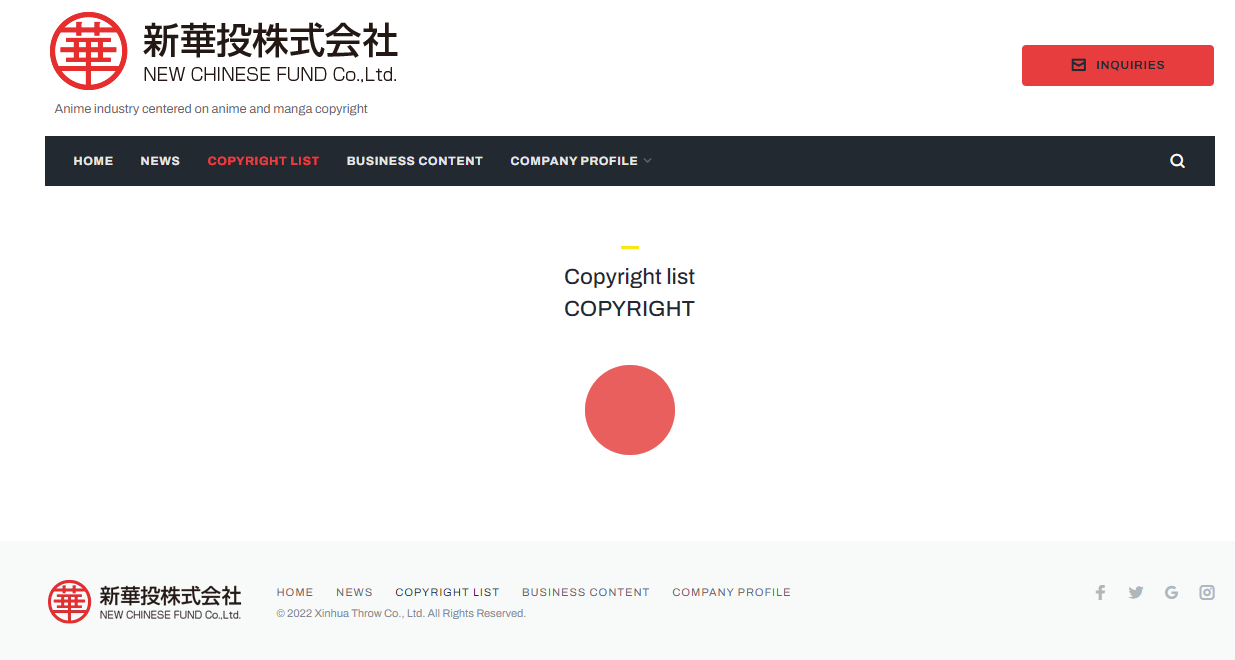 In their own profile, Mangaverse Private Ltd. describes their project as the world’s first IP-based NFT game – a fact which would otherwise go unknown as there’s nothing about any game on their official website.

Though it now only features a promise that the project is “Coming Soon”, the site previously featured only an announcement about their partnership with Football Metaverse and an advertisement for the Captain Tsubasa NFTs. 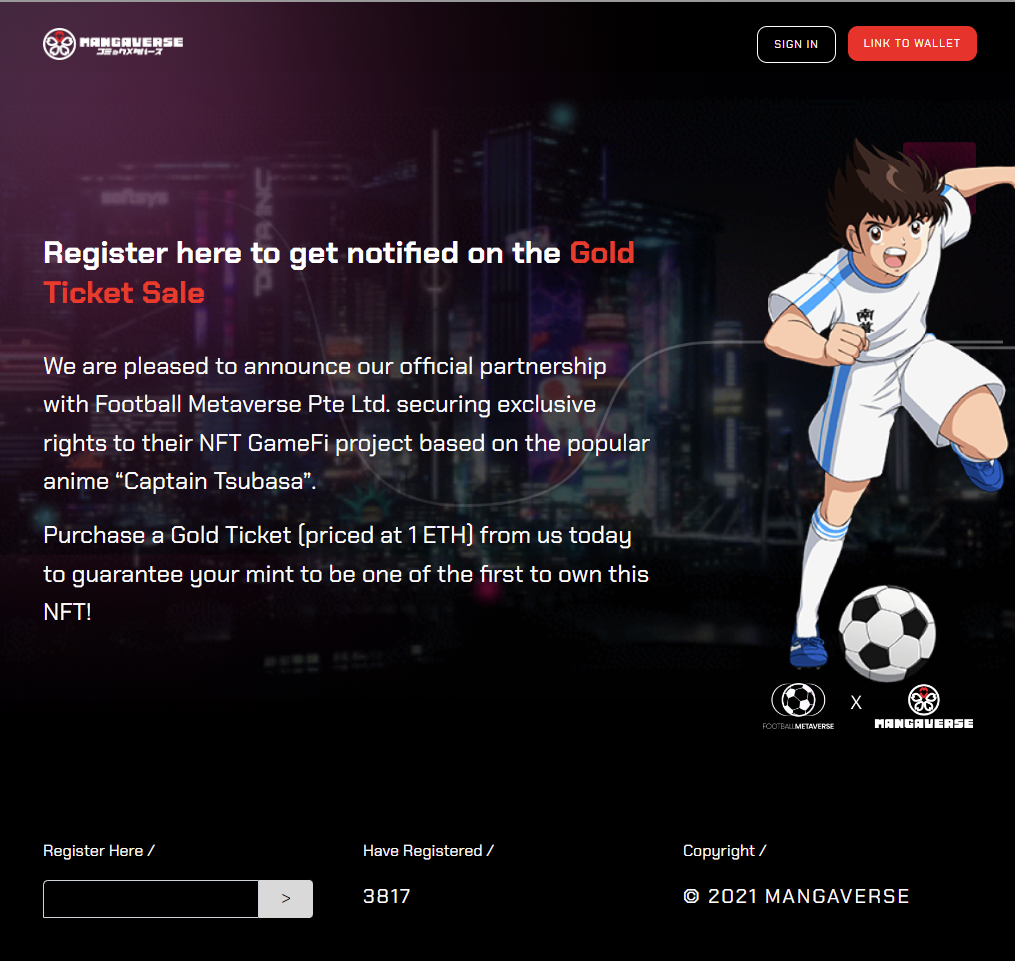 The closest thing we could find to an ‘official’ authorization for the use of the Captain Tsubasa IP was the below certificate confirming their partnership with Football Metaverse, which in all honesty looks less like a legal document and more like something straight off of Printmaster Premiere. 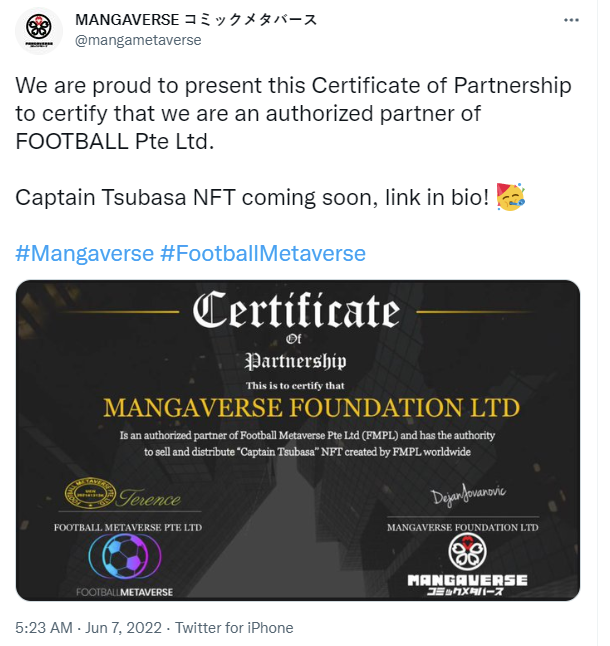 Though the above NFTs are unofficial, amidst this controversy, Iwamoto announced an official Captain Tsubasa NFT collaboration between them and The Sandbox.

“The Sandbox is a blockchain metaverse that has been in the news for its funding of approximately 10 billion yen from the Softbank Group,” said the director on June 20th. “Not only will the characters from ‘Captain Tsubasa’ be created on the metaverse, but a soccer stadium as well!” 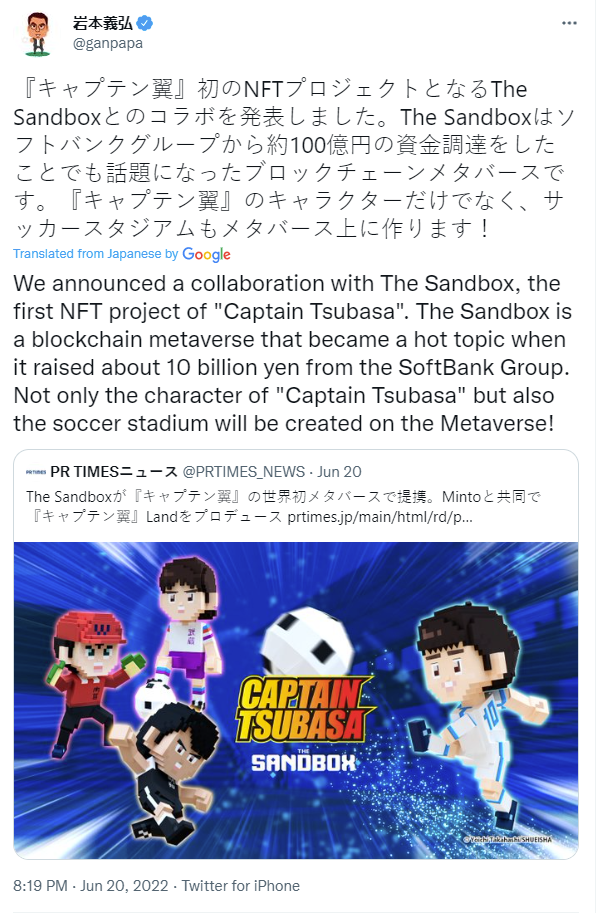