Dragami Games announced they are working on a remake of Lollipop Chainsaw, with “a more realistic approach to graphics this time.” 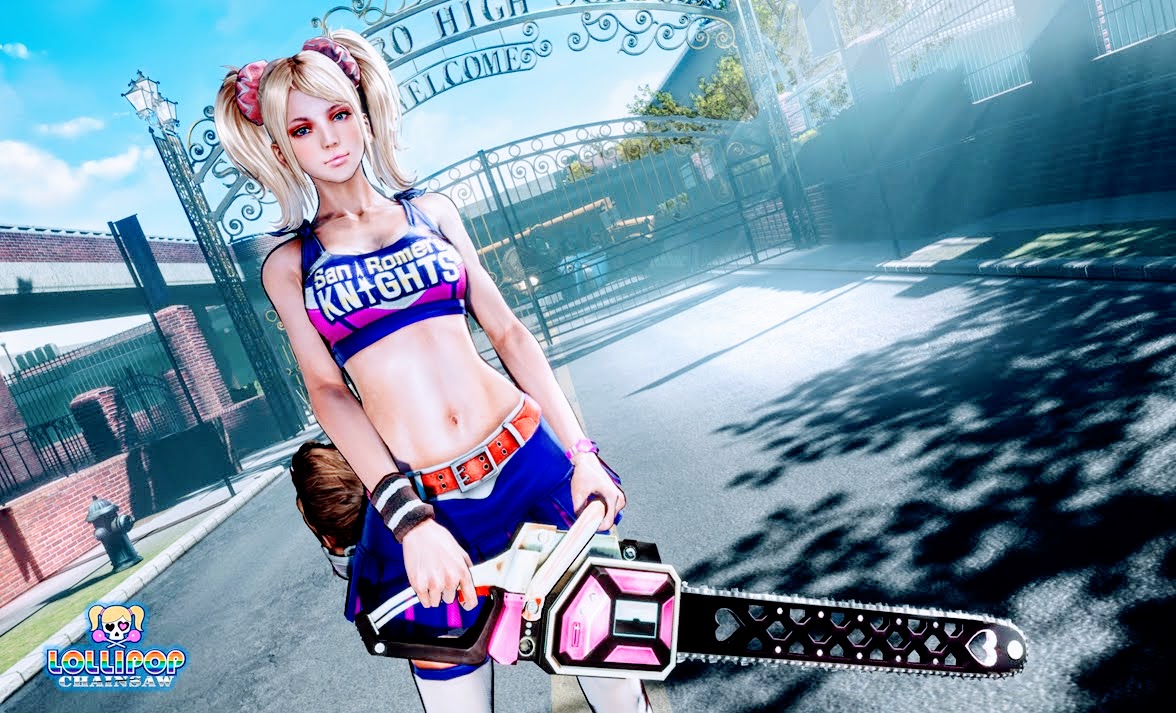 The game’s announcement was initially teased by Yoshimi Yasuda- former president and CEO of Kadokawa Games, leaving in May to form and become CEO of Dragami Games, and an executive producer on the original Lollipop Chainsaw.

“Lollipop Chainsaw is back by Dragami Games. Please look forward to it.,” Yasuda tweeted in English and Japanese. 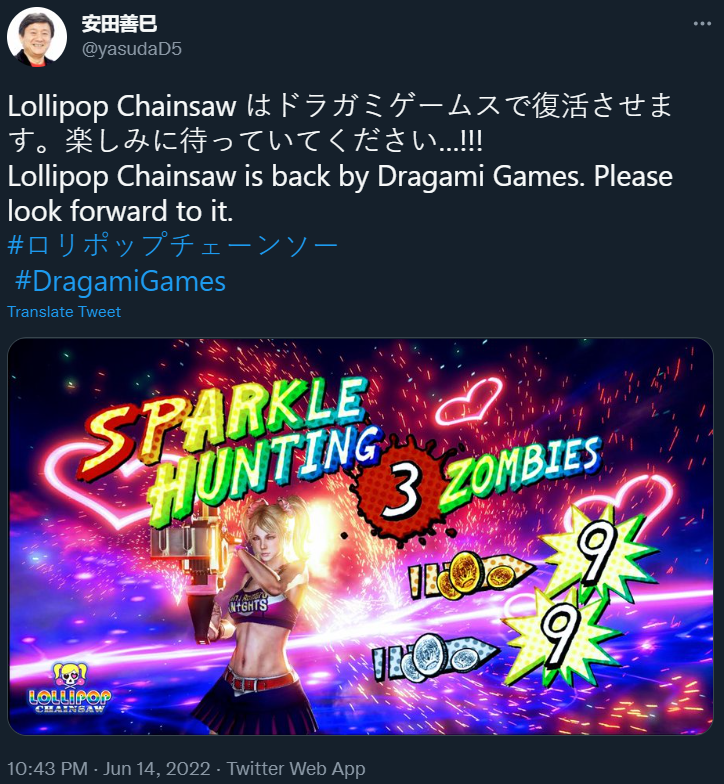 This was followed by another teaser featuring a compilation of Kadokawa Games that Dragami Games had acquired (along with 30 developers). 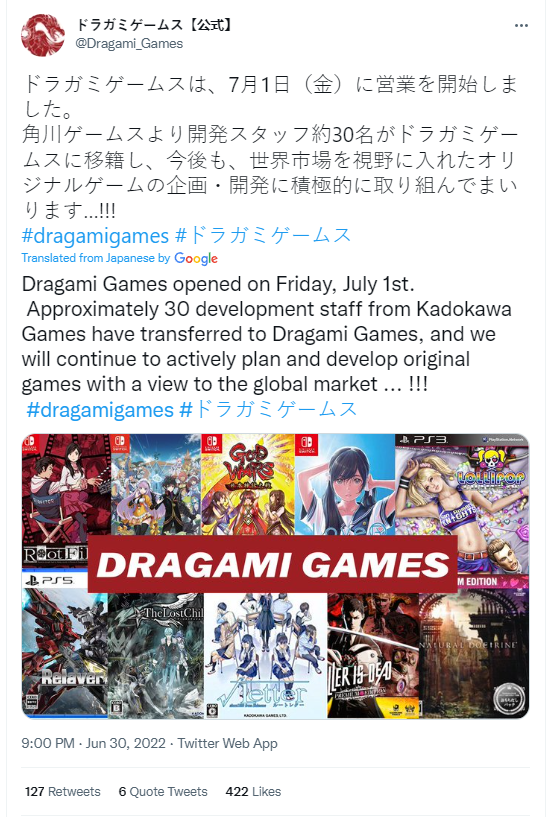 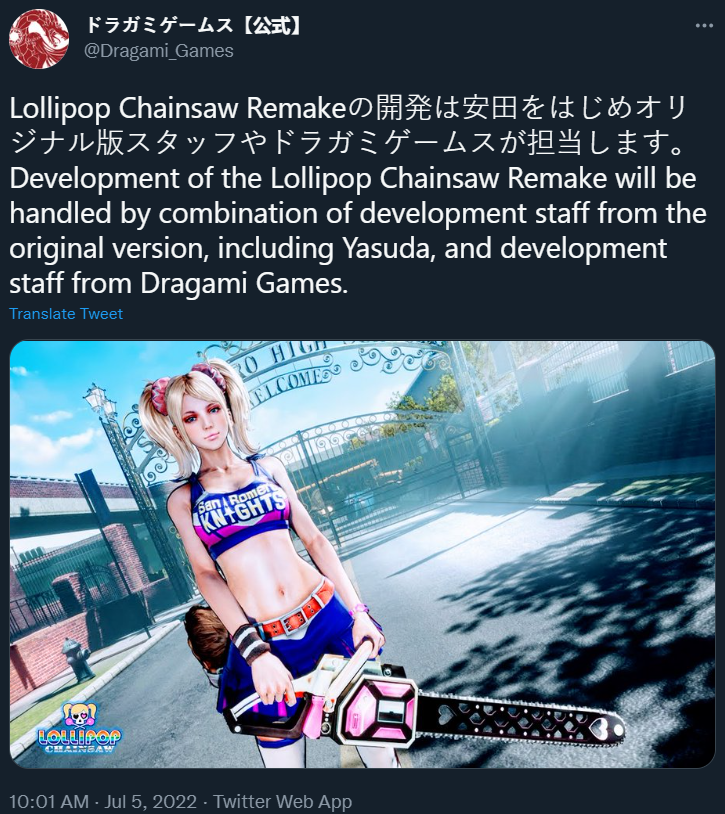 A scant few other details were revealed the same day. “Dragami Games officially announced the launch of Lollipop Chainsaw Remake (Tentative Title) in 2023.” Platforms however were not revealed at this time. 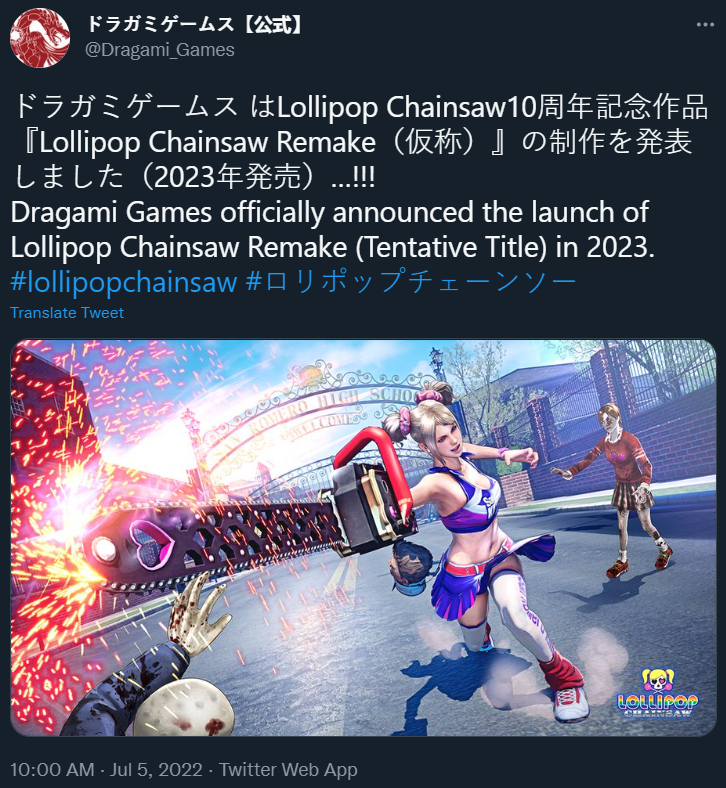 Yasuda would provide further details on what the Remake wouldn’t include and what would change as well as providing details on the development of the original Lollipop Chainsaw game.

“As Suda-san was very busy handling development on other projects at the time, I served as director and producer, creating a joint development team consisting of staff from Grasshopper Manufacture and Kadokawa Games, overseeing development directly. Suda-san looked over the game design and supervised the project as an executive producer.” 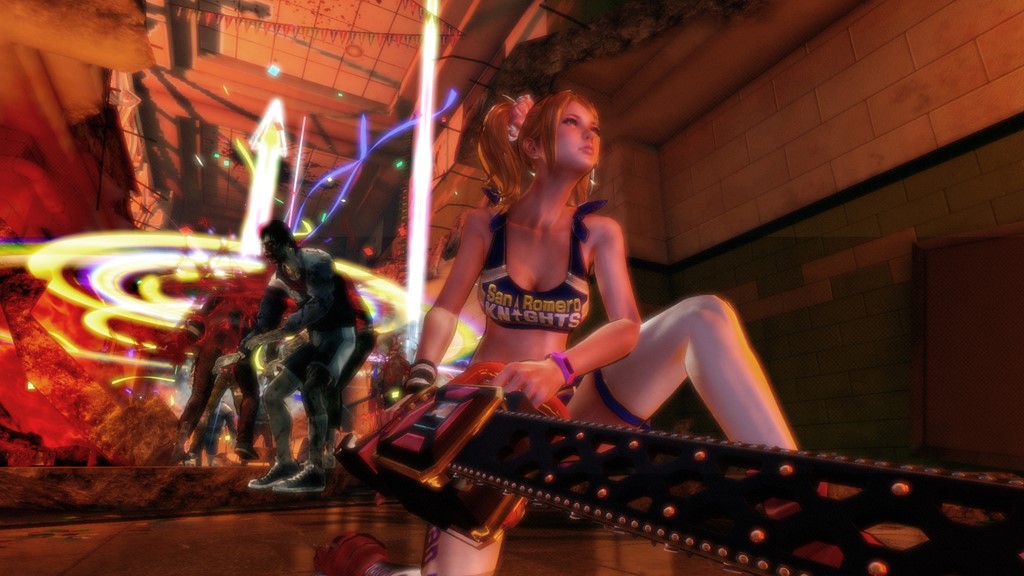 “In January 2010, the aid of a friend of mine working at Warner Bros. led to us successfully grasping a chance with the Warner Bros. greenlight committee, and Warner Bros. thus becoming the publisher for the game in all regions outside of Asia,” Yasuda revealed.

“Furthermore, a Warner Bros. senior manager suggested that we have the game’s script rewritten, and that we leave it to film director James Gunn, which we gladly agreed to.” Gunn was credited as a writer, while Masahiro Yuki was credited with the scenario.

“All of this good fortune resulted in Lollipop Chainsaw, which released in June 2012, being loved by many players all over the world, selling over a million units worldwide. Unfortunately, various factors resulted in things making it so that fans can no longer easily play Lollipop Chainsaw, and it has been some time since players have not been able to access the game on current consoles,” Yasuda admitted. 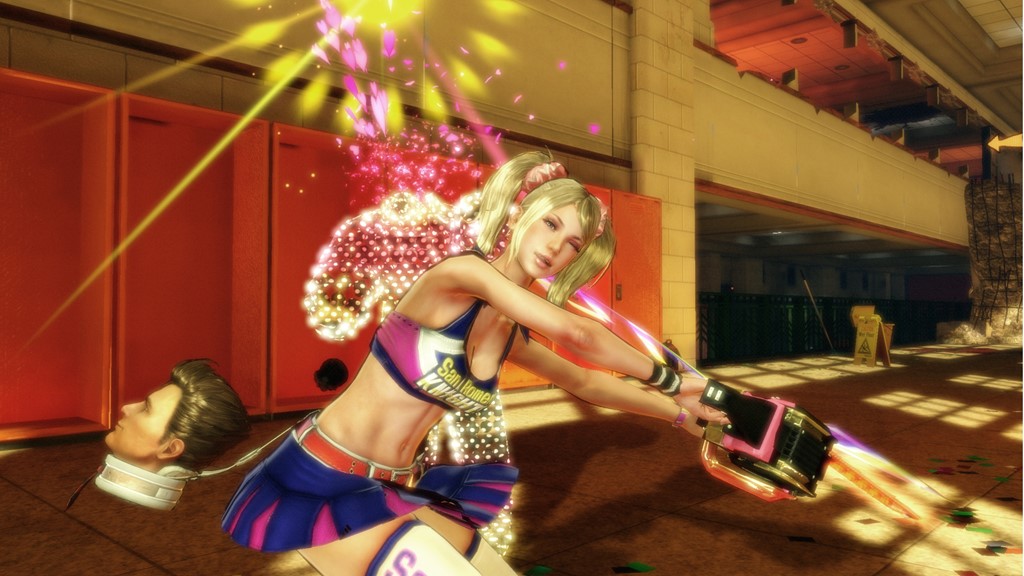 “We, the original development staff on Lollipop Chainsaw, think of the game as very precious to us,” Yasuda conveyed, “and did not want to leave it in limbo, where players who want to play it cannot.”

“As such, we purchased the Lollipop Chainsaw intellectual property from Kadokawa Games, and decided to develop a remake,” Yasuda clarified. “We have already contacted Warner Bros. about development, and are being supported by them in this endeavor.”

“One thing that we have to tell fans of the original game is that even though the original staff are working on the remake, there will be elements that are different from the original,” Yasuda warned. 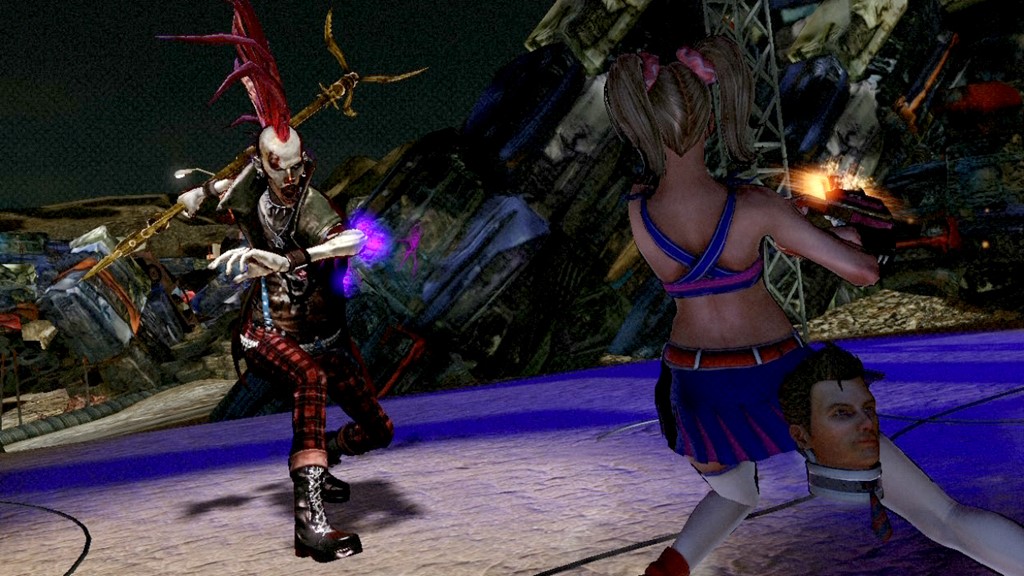 “For instance, the original game had 15 licensed songs used in the soundtrack, but it is unfortunately difficult for us to implement all of them this time. As a result, aside from a few licensed tracks, the soundtrack will consist of new music,” Yasuda announced. “Additionally, since we have access to consoles with higher specifications, we will be taking a more realistic approach to the graphics this time.”

“In any case, our goal is to make it easier for gamers who want to play Lollipop Chainsaw to do so. Please look forward to the game’s 2023 release,” Yasuda concluded.

Some not only expressed concern over the game’s realistic art-style this time around, but also fears of censorship, even that the “realism” was a metaphor for censorship. The latter isn’t entirely unfounded, as games have seen plenty of censorship against sexual content in video games.

Lollipop Chainsaw’s protagonist, Juliet Starling, is typically decked out in a cheerleader outfit with cleavage and a short skirt, with more than a few cutscenes emphasizing that fact. Her unlockable costumes include bikinis, daisy dukes, a skin-tight motorcycle racing suit with an open zipper almost reaching her crotch, and more.

“Now ya’ll know damn well, that Lollipop Chainsaw is going to be censored, to oblivion,” @Black_D_Gamer1 pessimistically lamented. “The game came out in 2009 & it’s been effectively 14 years since then. People have gotten soft & hyper offended over ‘the sexualization of women’. This ‘remake’, finna be straight mid.” 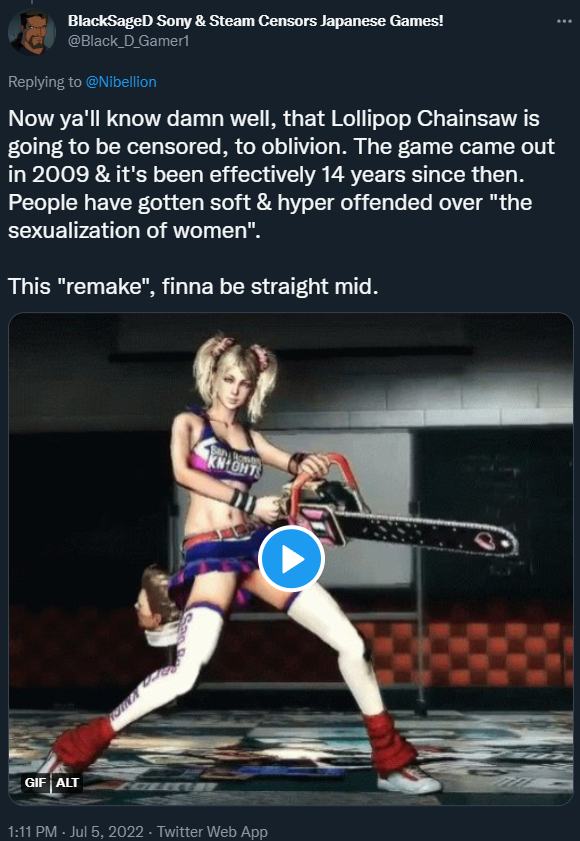 “Thong bikini or bust, I am tired of all these remakes promising changes as a precondition beyond the licenses,” @WarOnFanservice demanded. “The original is really not that expensive than buying a 50-60 bucks remake that is in the worst case digital only.” 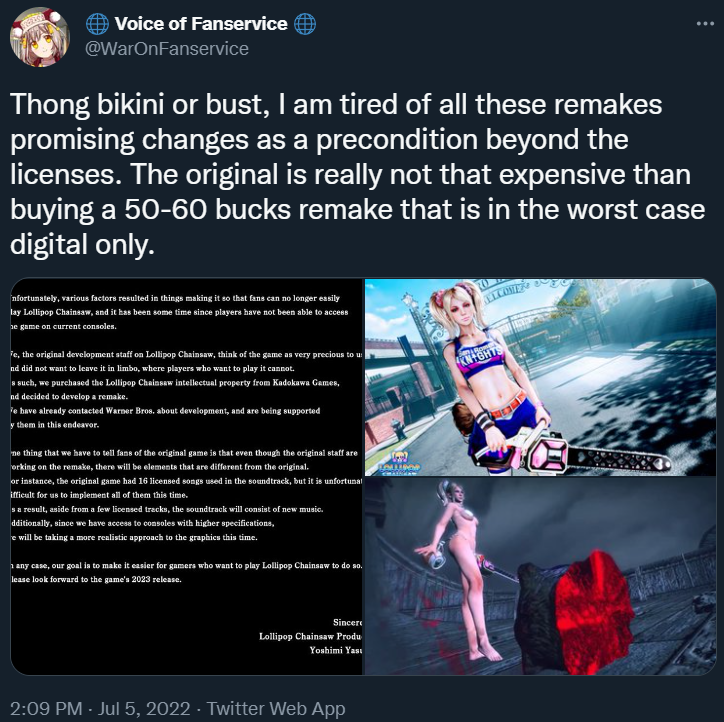 “I’ll put money on a change like Tifa had in FF7R,” YouTuber Vara Dark proposed, alluding to Final Fantasty VII: Remake being subject to Square Enix’s “ethics department” reducing the size of Tifa’s chest. “Skirt will be raised, added layer of fabric under her top, shorts under the skirt. If we’re LUCKY it won’t be a full outfit change.”

“I know that ‘more realistic’ refers to the graphics but usually I don’t trust the word ‘realistic’ in a video game,” @AnabelG41628231 erred (machine translation via DeepL), “it sounds like censorship (at least to me) I hope I’m wrong but there are already so many censored remakes that I’m already doubtful. But hopefully I’m wrong”

As aforementioned, Suda51 and Gunn worked on the original Lollipop Chainsaw. However, neither had involvement of this upcoming remake, and knowledge only weeks prior to the announcement.

“To answer the question in the article,” Gunn tweeted, referring to Bloody Disgusting coverage, “neither I nor @suda_51 are currently involved in this. I heard about it for the first time from Suda a couple weeks ago.” 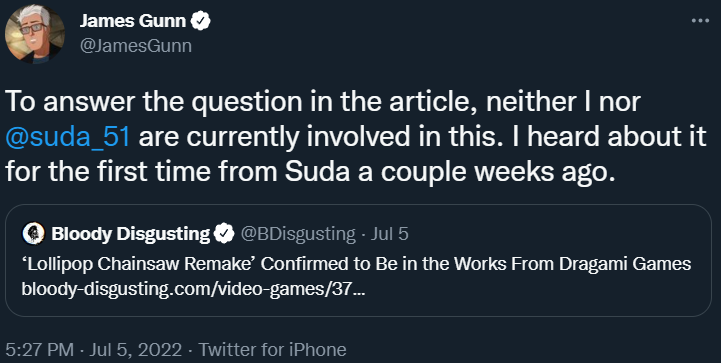 “To add my two cents, like @JamesGunn says, neither he nor I am involved in this project at all,” Suda51 reiterated, adding, “and Grasshopper Manufacture has nothing to do with development or anything.”

However, these comments only inspired more concern. Some felt that the pair and developer Grasshopper Manufacture should be involved once more (despite Yasuda’s statement about the original staff being involved), or that their permission should have been asked (ignoring true ownership of the IP).

“I have no faith in this,” denounced @DrGasMax. “Neither Suda or James Gunn are on board for it, Suda makes sense because he is busy with other projects but James Gunn recently said he has not been approached about anything Lollipop Chainsaw related but he would love to be involved,” @DrGasMax claimed. “Reeks of cash grab.”

“Another case of why you always buy physical,” upheld @VGdropout. “LPC is not the same without the music, plain and simple. Even if it was salvageable, it isn’t S–T without @suda_51, @JamesGunn and Grasshopper. Just don’t.” 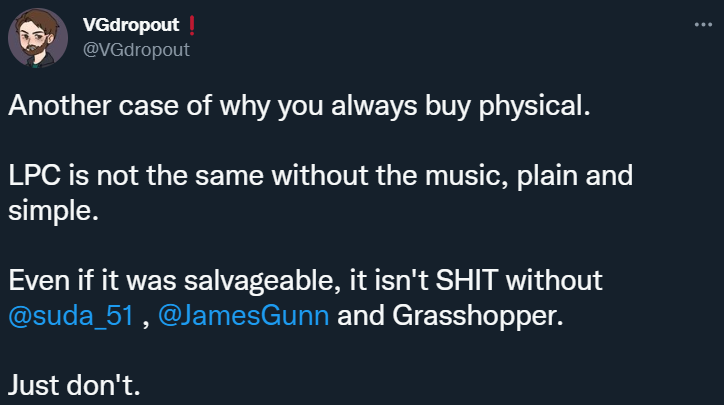 The original Lollipop Chainsaw released in 2012 for PlayStation 3 and Xbox 360. The hack-and-slash title saw cheerleader Juliet take on zombie hordes on her 18th birthday. A goth has opened a portal to the “Rotten World” to bring about a zombie apocalypse. Luckily, Juliet is a zombie hunter.

Using magic to keep her boyfriend alive after a zombie bite (as a decapitated head hanging off her belt), Juliet must use her trusty chainsaw to fell zombies, save her San Romero High School classmates, and take down the Dark Purveyors- each themed around different styles of rock and roll. 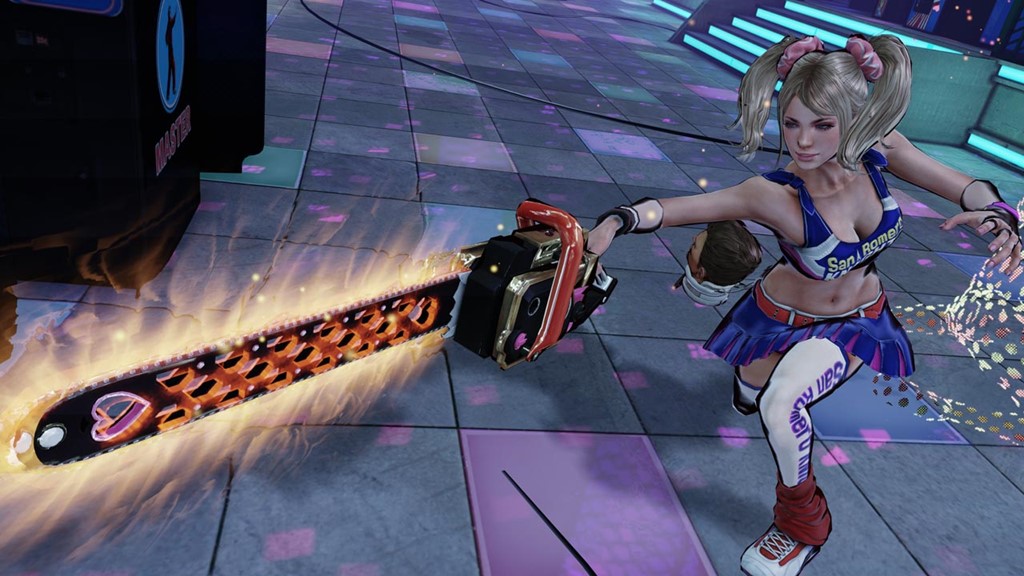 Are you looking forward to a Lollipop Chainsaw remake? Let us know on social media and in the comments below.

NEXT: Studio Trigger Announces Return Of Panty & Stocking With Garterbelt