Vigil took to his Facebook where he shared a Politico article featuring Donald Trump’s full speech to the United Nations. Vigil added, “not a great speaker but his message is truth.”

Saavedra, who worked on a number of Disney comics in the 90s including Disney’s Tale Spins as well as Bugs Bunny and Looney Tunes, viciously attacked Vigil for his support of President Donald Trump’s speech to the United Nations.

Saavedra would begin his attack questioning, “I’m just now realizing that you’re a f****** trump supporter? Are you f****** serious, dude?” He adds, “How in f**** sake can an artist support that walking slag of excrement.”

He would go on to call Vigil “f****** ridiculous.” He then questioned if Vigil supported kids in cages, “so you support kids in cages right? Separated families, it’s the parents fault for bringing their kids, right?”

He continues to attack Vigil and adds in Ethan Van Sciver as well, “You’re on the wrong side of history, dude. You, Van Sciver and all you nut jobs are f****** wrong. The Republican Party is the Meathead Party.”

Saavedra then states, “Better check your DNA pal, my people were slaughtered so that you could live and walk around on the blood soaked ground you step on everyday.”

He still wasn’t done. Saavedra added, “You’re a f****** immigrant, just like the rest of America. You’re all illegal here so supporting a monument of hate on the border is f****** retarded.”

Saavedra then insinuated he was going to cancel Vigil:

“I gotta f****** jettison your ass into the digital abyss dude, I totally had every f****** issue of Faust, poured over every page.

What a let down that you support this walking abortion in the White House.

What a joke. Good luck with your life, dude.

“I usually don’t go off like that Tim, so I’ll apologize for my colorful vernacular but my view is still the same.”

He added, “I use to be able to disagree and just let things be but with 45’s embolden rhetoric I just can’t. It’s your party, your page. I can’t be around this.” He concludes, “May the Great Spirit watch over you and your family. I’m out.” 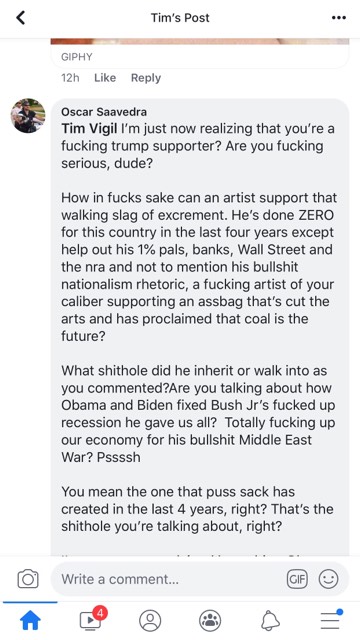 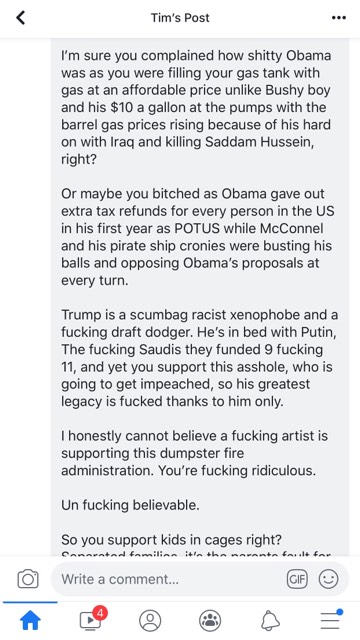 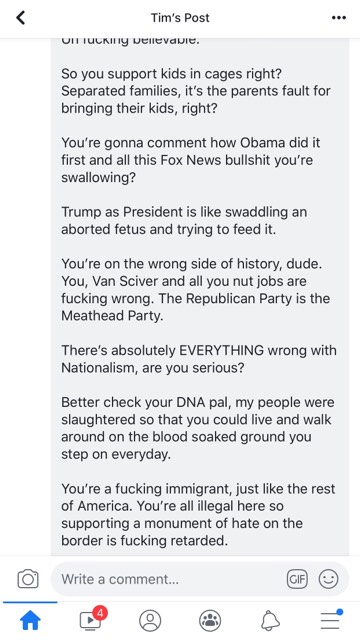 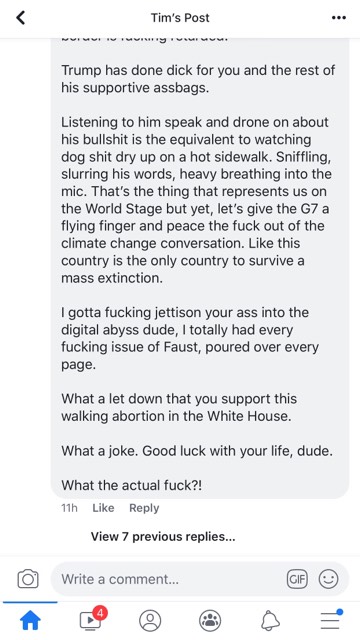 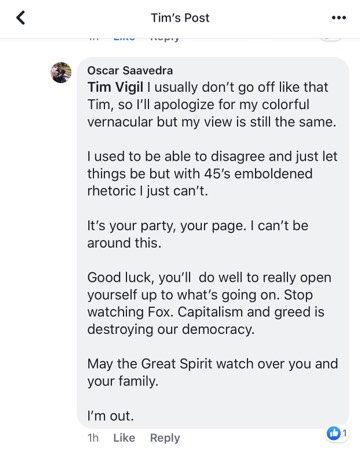 And it’s not just their hateful and sometimes violent stance towards supporters of Donald Trump. As Saavedra alluded, they want to cancel people who are Trump supporters.

Former Marvel Comics artist and the creator of Graveyard Shift Jon Malin told us back in March 2018 that political intimidation has become accepted in the comic book industry. (Related: Marvel Editor Accused of Politically Discriminating Against Trump Supporters)

“Everything from open racism, sexism, and political intimidation has become acceptable and this should be a concern for all. Political intimidation should be unacceptable for an editor to use on co-workers or freelancers, I don’t believe editors should be fired for this but they need to be removed from creative control positions so talent can feel welcomed to maximize a stories potential to sell.”

Bane creator Chuck Dixon confirmed Marvel Comics operates a blacklist when he revealed that he’s on it. (Related: Interview: Wading Into War with Chuck Dixon)

“When you don’t fall in lockstep with everything Axel Alonso believes. Of course, which of us is still working in comics today?”

And before Neal Adams declared he was ashamed of being white because of Donald Trump, he warned about the comic book industry discriminating against Republicans. (Related: Neal Adams Warns Against Discrimination of Republicans in Comic Book Industry!)

WHOA! I’m hearing that certain creatives are not getting work because of their Republican political views! I hope this is WRONG! WE ARE A CREATIVE COMMUNITY,..NOT a political party. The very thought that “black-balling” for political reasons happens would be JUST PLAIN WRONG

There is a poison in the comic book industry that fuels hate and even violent rhetoric. It’s disgusting.